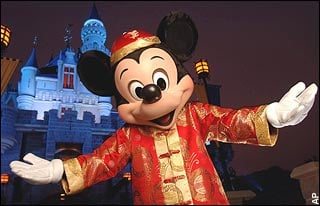 After years of cartoon capers with China’s government, Disney celebrated in June with the opening of its brand new $5.5 billion theme park in Shanghai. Or at least, that’s the happy ending fans of the entertainment giant were hoping for.

In reality, it’s proved tough to win love for Mickey and Donald.

Control obsessed Disney met its match in the Chinese Communist party, which insisted on an unprecedented level of micromanagement of the American icon’s affairs, from approving rides at the park and the cost of tickets to refusing any nationwide TV channel. After endless negotiations, Disney ultimately caved to Beijing’s demands, lured by a billion potential customers.

But this was just a trailer to the battle to come. Disney now faces opposition from China’s richest man, Wang Jianlin, and his ambition to make his company, Wanda, the biggest entertainment brand in China – and quite possibly the world.

When Wolves Eat a Tiger

Wang threw the gauntlet down by declaring that his plans for multiple theme parks would defeat Disney’s strategy of focusing on one major park in Mainland China. Comparing his parks to a pack of wolves ready to take down a tiger, Wang warned Disney it was a mistake to enter China: “The frenzy of Mickey Mouse and Donald Duck, and the era of blindly following them, has passed.”

This was not just an attack on a business rival. Wang was making it clear that Wanda represented Chinese culture and values that stood in stark contrast to Disney’s American imports. He tapped into nationalist feelings that foreign influences had gone too far in China.

Rather than rise to Wang’s bait, Disney merely responded that ticket prices would be the true test of success. The keepers of the “magic kingdom” have decades of experience in running theme parks and the world’s premier entertainment brand, recently bolstered by the acquisition of the lucrative Star Wars movie and merchandising rights. Disney will be hard to beat – yet Wang’s Wanda has started building its wolf pack.

While Wanda’s parks lack the famous cuddly characters of Disney, they emphasize local Chinese culture. They feature aquariums, movie centers and retail zones. The company has targeted second-tier cities like Harbin, Wuxi and Nanchang as sites rather than the megacities, helping to reduce overheads.

But Wanda has a bigger ace up its sleeve: political clout. Wang has carefully sold select shares of his business to family members of the Communist leadership to ensure he’s well protected and represented in the opaque world of Chinese power.

It’s also whispered that the government views Wanda as a means of extending Chinese soft power across the globe – a new priority for the ambitious Xi Presidency.

America’s movie makers are taking note. Martin Scorsese’s Kundun, which depicted the early life of the Dalai Lama, won Disney the wrath of China’s authorities, which restricted the company’s activities in China for years as a punishment. As the likes of Wanda start taking stakes in film production companies, expect more movies targeting the Chinese market with more sympathetic depictions.

Wanda’s unprecedented global acquisition drive this year has included the purchase of Legendary Pictures, the maker of Jurassic World, and the US AMC cinema chain, as well as circling the weakest of the major Hollywood studios, Paramount, seeking a minority stake. At the same time, it has bought a piece of Spanish football club Atletico Madrid, and deals like the purchase of Switzerland’s In Sport Media will give Wanda a front row into the lucrative world of TV sports rights. Other directions globally include expansion into Indian cinema.

These acquisitions, and more in the pipeline, will help to cement Wanda’s transformation from a real estate company into a services-based business focused on entertainment, sports and leisure – all sectors that are experiencing strong growth in China right now.

But on a broader level, Wanda also has a shot at becoming China’s first truly international brand – something that has so far eluded Chinese firms despite their success on the world stage.

In short, Wanda is on a direct collision course with Disney. Right now, it’s difficult to imagine a Chinese company coming close to the global cultural impact that Disney has, but with the right acquisitions and strategy Wanda could soon be eating a bigger portion of Mickey’s lunch.