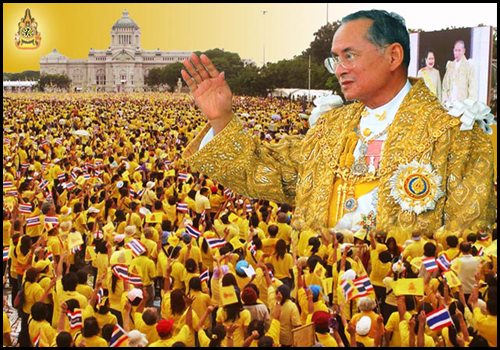 On Aug. 8, Emperor Akihito delivered a televised speech expressing his wish to abdicate in the near future to pave the way for his son, Crown Prince Naruhito, to assume the Chrysanthemum Throne. The Abe government has been kept busy in seeking ways to meet his desire. But the matter is politically sensitive. Conservative royalists are concerned abdication could bring instability to the Imperial system in the long run.

Taking the Japanese case as an example, the Thai palace is encountering an emerging debate on the possible abdication of the much-revered King Bhumibol Adulyadej. The king will turn 89 this December. But he has been hospitalized since 2009 and news of his deteriorating health has recently badly affected the Thai stock market. His departure will have a huge impact on the political and economic stability of the country.

Like Japan, Thailand has no specific law allowing abdication. Being a king is a lifetime commitment. Through the current Chakri dynasty, established in 1782, there has been only one case, when King Prajadhipok decided in 1935 to step down. Three years earlier, in 1932, revolutionaries overthrew Siam’s royal absolutism and introduced a constitutional monarchy. Prajadhipok, under extreme political pressure, chose to abdicate, ending centuries of political domination by Thai monarchs.

In the aftermath of Prajadhipok’s abdication, the Thai monarchy’s political position rapidly declined. The mysterious death of his successor, King Ananda Mahidol, in 1946 further placed the monarchy in obscurity. But with the assumption to the throne of King Bhumibol, the rise of royal power became gradually more evident. Bhumibol forged alliances with a series of military dictatorships in reconstructing the political landscape whereby civilian governments would be kept weak and vulnerable. Should they pose a threat to the royal power, they would be toppled in military coups.

Therefore, the discourse of Thai monarchy operating within the constitution has always been illusive. In reality, Bhumibol had been an active political player. At the same time, conservative royalists were able to re-create a sacred image of the king, transforming him into a semi-god and an inviolable institution. His periodic interventions in politics have become the political norm. In fact, Thais are used to the royal interventions as a way to end political conflicts. From this perspective, the power of Bhumibol is immense. There is a significant difference in the political positions between Bhumibol and the Emperor.

Because he is overwhelmingly revered, discussing abdication is severely sensitive. In the Thai context, debate on abdication could be considered lese majeste, which can be defined as insulting the monarch, since such debate certainly signifies the incompetence on the part of Bhumibol. As a semi-god, Bhumibol must be forever competent, even as he is now on his sickbed.

But a bigger issue in which conservative royalists are in denial is the public anxiety over Bhumibol’s successor, Crown Prince Maha Vajiralongkorn. Unlike his father, Vajiralongkorn is not loved by the public. He is an unpredictable character, lacking in charisma and moral authority. Royalists fear that the crown prince will not be in a position to protect their political interests. In other words, the next monarch may not be able to guarantee the stability of the throne as well as the benefits of its supporters.

Understanding the life of Vajiralongkorn is paradoxically easy and elusive. It is easy because Vajiralongkorn has over the years demonstrated little interest in political and royal affairs. Admittedly, the crown prince’s persona has long been eclipsed by that of King Bhumibol. After all, the king has led a long reign, being crowned in 1946. The longevity of Bhumibol’s era has somewhat discouraged Vajiralongkorn from taking any initiative in the political domain. More importantly, it has also prevented him from consolidating his power position, thus failing to gain crucial support from the monarchy network.

Meanwhile, it is elusive to study Vajiralongkorn’s life because Thais know little about his views on politics, or his vision for the future of the monarchy. The lack of leadership training, particularly in his future role as king, makes it more difficult both for Vajiralongkorn to provide any indication of his ability and performance, and for analysts to imagine the nature of his reign once his father dies.

The seemingly imperfect choice could be why the palace has rejected the abdication option. Despite little hope of outshining his father, Vajiralongkorn has recently undergone an image reinvention. His palace advisers attempted to create a new persona for Vajiralongorn, mostly in two aspects: as a devoted prince and as a family man. But the fact that he divorced his third wife in December 2014 ruined such efforts.

In July this year, controversial photos of Vajiralongkorn in Munich were leaked to the German media. He was seen wearing a skimpy singlet barely covering massive yakuza-style tattoo stickers on his back, chest and arms. While talking openly about Vajiralongkorn’s scandalous lifestyle breaks the lese-majeste law, royalists, and even the Thai public, continue to gossip about him. Anxiety about the future is palpable. This is partly why the military staged the coup in 2014 — to ensure that the royal succession is controllable.

In contrast with Japan, the Thai monarchy has refused to deal with the reality at the imminent end of the Bhumibol era. As a result, it will be even more disastrous for the monarchy in terms of its (lack of) preparation to cope with uncertainties that will accompany the next king. The decision of the Emperor is wise; not only does it emphasize his responsibility for public duties, but also his vision of the throne as it will be passed onto the new generation.

Sadly, the Thai monarchy has lived in its glorious past, without looking into the future of itself and of the country.