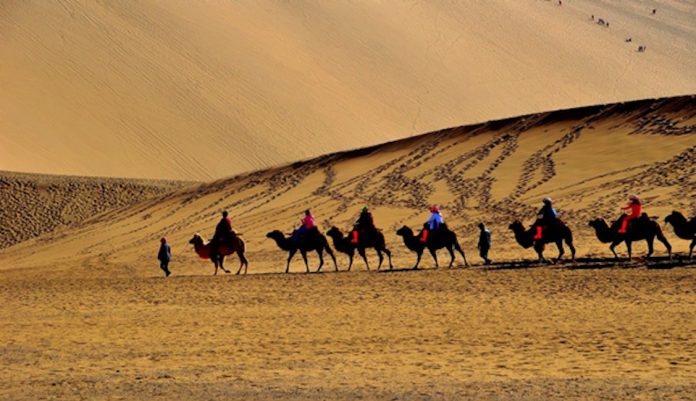 As China’s Belt and Road Initiative gathers steam it is worth stepping back and examining the long term prospects and risks around this continent-spanning enterprise. There is a lot of justified optimism about what Beijing is planning. If the Belt and Road Initiative works as planned it promises to connect and transform the Eurasian landmass through infrastructure projects together with increased trade and cooperation between its participant countries.

The scale and ambition of the initiative is difficult to comprehend, but its success could improve life for billions and change the way we think about trade and geopolitics. However, the fact that it is such a massive undertaking also forces one to analyze the project with a critical eye.

Era defining initiatives like the Belt and Road Initiative have the potential to go badly wrong for a number of different reasons. In the following, I look at five scenarios which may seem unlikely now, but could very easily damage the credibility of this enormous international endeavor.

1. China pulls back and stops investing in Belt and Road projects. China could wind down its commitments overseas thanks to a recession or a prolonged economic slowdown. This could be brought on by the country’s debt bubble or perhaps a fundamentally unstable housing market. In turn, this could spark unrest and an urgent need to focus resources at home. From a business point of view this would be a mistake as large Chinese companies should be expanding abroad as a hedge against domestic markets. From an economic viewpoint a recession would get rid of some of rot in the business world and impose market discipline across the economy. However, this would be politically unacceptable as potential job losses could then result in social unrest and ultimately call the Communist Party into question.

2. There is a risk of division and conflict in countries along the Belt and Road as China plays uses a strategy of divide and rule. China may well successfully extend its influence so no one can stand up to it. By offering inducements to individual governments, they will be more inclined to take Beijing’s side in disputes. Even if some countries stand up to the Chinese, those that do not will be isolated and forced to bend to Beijing’s will. For example Latvia ensured it never made an official welcome for the Dalai Lama and as result reaped the diplomatic benefit by becoming the first Baltic State to sign a Belt and Road Memorandum of Understanding. This left the other two Baltic States, Estonia and Lithuania, in the (relative) cold. But at what price to Latvia’s political independence? Of course China might stick to its promise of a peaceful rise and remain out of other country’s affairs, but history tells us that rising powers can rarely avoid getting entangled in international affairs.

3. The risk that projects within the Belt and Road Initiative will end up as white elephants. There is a real danger that finance from Chinese policy banks is poured into unproductive projects across the region. Many countries along the road have patchy economic and security records. Funds could be frittered away as roads that are not maintained, or on rail links that look and sound amazing but are uneconomical. At the same time corruption and waste eats away at these same projects, sucking the life out of the enterprise. A lack of strong national institutions and apathy means that both China and the host countries are unable to stop the rot. Some analysts believe the Chinese know that there will be widespread waste and failed projects, but the boost to the many state owned firms winning construction contracts as well as the geopolitical kudos still make the enterprise worthwhile.

4. Chinese firms dominate the procurement and financing of Belt and Road projects. This is a risk because while many will welcome Chinese money and expertise, the current operating model is that Chinese firms and workers build the majority of the project and locals get all the unskilled jobs. Countries on the Belt and Road do get a major amount of new infrastructure (and a large bill) but often very little in terms of skills transfer. At the same time China will also happily import raw materials from its neighbors in Eurasia but so often this results in a short lived commodity boom. Inevitably what follows is a crash with the country evermore dependent on exporting natural resources. The result is that the Belt and Road projects end up imitating the colonial and neo-colonial trade patterns visited upon Africa and Asia by Europe – with many countries acting as agricultural, mineral and commodity annexes to the Chinese economy, with little hope of long term positive transformation.

5. Could the Belt and Road be a precursor to China taking a more dominant military role across Eurasia? Right now China could be described as an economic superpower and the Belt and Road will certainly work to strengthen that claim. However, Beijing has not shown much interest in extending its military power with foreign bases or interference in other nation’s affairs. As Chinese interests multiply the temptation will come to protect those assets with military power. If the US steps back from its dominant role in the Middle East or Europe could China step into its place? China as a military power across Eurasia could enhance its economic prowess by firmly protecting its businesses and trade links, but at a cost. Just as the US has experienced, resistance to Chinese power could be in the form of anti-Chinese governments, non state actors like terrorists, or even widespread public opinion.