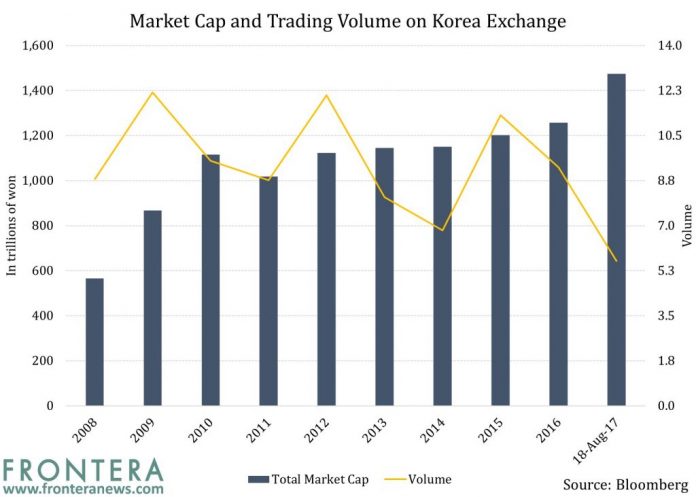 This is post 3 of 4 in the series “Which Are The Six Largest Emerging Market Stock Exchanges?”

In the emerging markets universe, the Korea Exchange finds itself in the fifth spot behind two exchanges each from China and India. Two major divisions of the exchange are located in Busan and Seoul with the stock market division housed in the latter office.

The Korean stock market began operations on March 3, 1956 with only 12 listed companies on the Daehan Stock Exchange. At the time, the volume of stock trading was insignificant with government bonds taking center stage.

The stock market received a fillip since mid-1960s on the back of government policies like the capital market growth plan and IPO (initial public offering) policies for corporations in need of efficient industrial funding.

The Korea Exchange was launched in January 2005 by consolidating the following four domestic markets: The first stock index of the country was calculated using an adjusted stock price averaging method on 17 constituents on January 4, 1964. In 1979, it began to be known as Korea Composite Stock Index (KCSPI), comprising 35 constituents.

At present, the primary benchmark index of the stock market in South Korea is the KOSPI (Korea Composite Stock Price Index), which is a market capitalization weighted index. It had been inaugurated on January 1, 1983.

While the graph above plots the market cap and trading volume on the Korea Exchange, the table below provides key metrics of the KOSPI. The total number of listed companies on the Korea Exchange is 2,161 at present. Meanwhile, stocks of 760 companies make-up the KOSPI. Top 10 companies comprising the index form 38.52% of the KOSPI with Samsung Electronics (005930.KS) forming 20.62% of the overall index by itself.

The other major index is the KOSDAQ, which was introduced on January 3, 1997 and tracks 1,223 companies.

This is post 3 of 4 in the series “Which Are The Six Largest Emerging Market Stock Exchanges?”