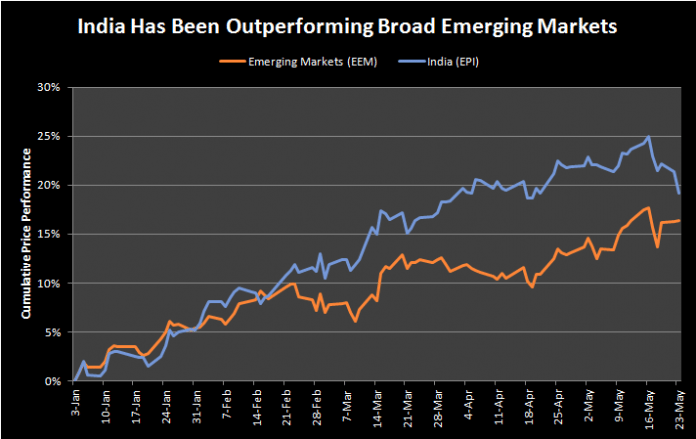 This $2.4 billion fund is bullish on the Indian stock market

Washington D.C.-based emerging market (EEM) (VWO) specialist Cartica Management, which manages about $2.4 billion in assets is currently very bullish on the Indian stock market. The asset management firm’s CEO, Teresa Barger, recently spoke about the company’s stance on the Narendra Modi-led economy during a Bloomberg interview at the SALT conference. 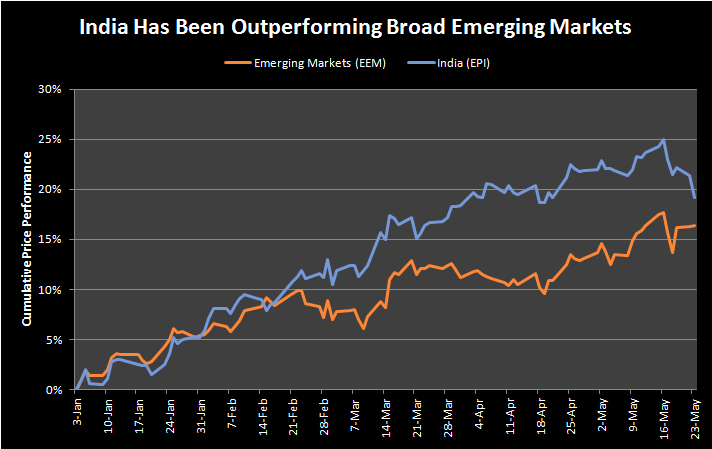 So far this year, the Indian stock market (EPI) (INDA) (PIN) has been outperforming the broader emerging markets by a fair margin.

Barger pointed to the tax revolution that’s happening in India currently. She believes that the implementation of the GST (goods and services tax) in the economy would bode well for the stock market. Currently, a large amount of market share in many industries is in the hands of the informal, unorganized sector in India. The requirement of increased tax accountability in the nation should benefit the listed players who are already paying their taxes. With part of the informal sector being washed off, the listed players will grab more market share in their respective industries.

Long-time emerging markets investor Mark Mobius also sees the GST as a very positive development in India. “It’s terrific what’s happening in India.” He sees Indian states coming together now; not only because of the GST reform but also because of the internet.

“Only <1% of GDP is represented in the stock exchange in India,” noted Barger. Now, with the government’s crackdown on black money/unaccounted income, 90% of the money has now come into the banks. Moreover, 30% of Indians are Millennials (between the ages of 18-35). They control 70% of household income. These people are investing in mutual funds, and the government has now allowed mutual funds to invest more in equity. So, Barger believes that we should see more money going into the stock market from the domestic market, going forward.

India’s stock market is already up about 15% YTD. Barger believes that there’s still more room to run. “Look at the PEG (price earnings to growth) ratio,” she pointed.” In India it is about 1, while in the US it is getting about close to 2; so, investing in the US is twice as expensive for the earnings you get.”