On 3 November, U.S. President Donald Trump set off on an extensive Asia tour. The twelve-day journey, which was extended following the President’s decision to attend the East Asia summit with leaders of the Pacific Rim, is the longest one in the region made by any sitting U.S. president since George H.W. Bush in 1991. After a first stop in Hawaii, where the President was briefed by the U.S. Pacific Command, he set off for Japan, South Korea, China, Vietnam, and the Philippines. Dominating the agenda is the looming threat from North Korea. Yet Trump’s bellicose posture is likely to be an impediment to any diplomatic breakthroughs.

Trump, the self-proclaimed ultimate dealmaker, once seemed relatively bullish on the prospects of dealing with Kim Jong-Un, calling the North Korean leader “a pretty smart cookie” whom he would be “honored” to meet. Hopes for a high-level diplomatic solution to North Korea’s nuclear quest, however, have repeatedly been squandered. The country’s leadership has defied international condemnation by conducting multiple nuclear and missile tests, and Pyongyang has stepped up its anti-American propaganda.

Just before assuming office, Trump announced that a nuclear North Korea “won’t happen.” While repeatedly deriding the policies of his predecessors, however, his own administration has fumbled to come up with a strategy to counter the Kim regime’s nuclear ambitions.

Steps in the right direction

There have been some successes. Even Trump’s critics will admit that his administration has succeeded in ramping up the economic and diplomatic pressure on North Korea, unilaterally as well as through the United Nations Security Council. In August and September, the Security Council passed resolutions imposing restrictions on North Korean exports of coal, iron, iron ore, lead, lead ore and seafood as well as new measures targeting the country’s primary foreign exchange bank and its ability to rake in receipts from workers posted abroad.

This increased pressure has served two primary purposes. To start with, it has amplified the economic burden on Pyongyang. In the wake of the most recent sanctions, North Korean officials have publicly acknowledged that the measures are causing significant damage to their already tattered economy. Second, the multilateral sanctions are contributing to signal a united stance against North Korea’s nuclear ambitions – especially given the accomplishment of eliciting support from veto-carrying China and Russia on the Security Council. That is no insignificant feat by Nikki Haley, the U.S. envoy to the United Nations.

There have also been some promising, if restrained, signs of diplomatic efforts to deescalate the crisis. For example, Secretary of State Rex Tillerson confirmed that multiple covert channels between Pyongyang and Washington remained open despite the tensions. He also admitted that the United States remained open for dialogue. This indicated some degree of moderation in the volatile climate.

A rhetorical tit for tat

Whatever cautious grounds for optimism these developments represent, they have largely been undermined by the signals from President Trump himself. Trump has steadily escalated his bellicose rhetoric on North Korea and “Little Rocket Man,” the derogatory term he now prefers to use when referring to the North Korean leader. Trump has repeatedly belittled and threatened Kim in public statements and, above all, in his Twitter feed. As a result, the U.S.-DPRK standoff has increasingly turned into a personal dispute between the two countries’ leaders – one with exceptionally high stakes.

In his maiden speech to the United Nations General Assembly, Trump asserted that Kim was on a “suicide mission” and that the United States would not hesitate to “totally destroy” North Korea if it deemed it necessary to do so. With this rhetoric, Trump has signaled a willingness to use military force – not as a regrettable option of last resort, but as a preferred course of action. The unprecedented decision to publicly undermine his own Secretary of State – he claimed on Twitter that Tillerson was “wasting his time trying to negotiate with Little Rocket Man” – helped reinforce this message. It also strengthened the notion that statements on U.S. policy from other American officials and senior diplomats are irrelevant compared to what is posted on the President’s Twitter feed. 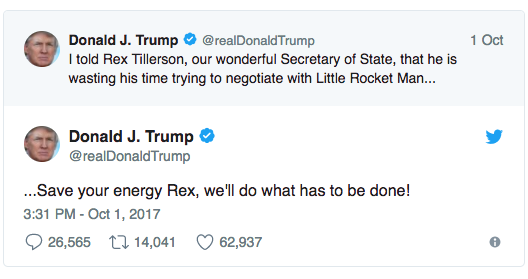 The defining challenge to a diplomatic solution to North Korea’s nuclear ambitions is the fact that Kim seems to view a substantial nuclear arsenal as a necessary deterrent against foreign interventions. From this perspective, acquiring nuclear weapons is seen as a means by which to ensure the survival of himself, his regime, and the state of North Korea (probably in that order). It therefore has a certain inevitability and internal momentum, regardless of threats and sanctions emanating from abroad.

Options on the table for North Korea

This reality has restrained the set of options available to the United States and its partners. Military intervention is an alternative, but one which would have devastating and unpredictable consequences. According to reports, the Pentagon has estimated casualties in South Korea during a conventional war at 20,000 per day. Another alternative is to accept a nuclear North Korea and seek instead to contain it. That is a perilous option which few policymakers are likely to support – least of all Trump. Accordingly, both these options are unattractive.

This makes continued economic pressure a more appealing tactic. While it is possible that sanctions could extract concessions, however, the track record to date is sobering.

Richard Haas has proposed a two-step approach to deal with the crisis, whereby a provisional agreement to halt the development of North Korea’s nuclear and missile programs would be tailed by long-term efforts aimed at dismantling them altogether.

What both these options have in common, however, is that they require tempered diplomacy – albeit backed up with a credible threat of use of force. Trump’s current posture, which has so far mainly managed to provoke his adversary, is an impediment to such an opening.

Axel Hellman is an analyst at Global Risk Insights. As originally appears at: http://globalriskinsights.com/2017/11/trumps-asia-tour-north-korea/