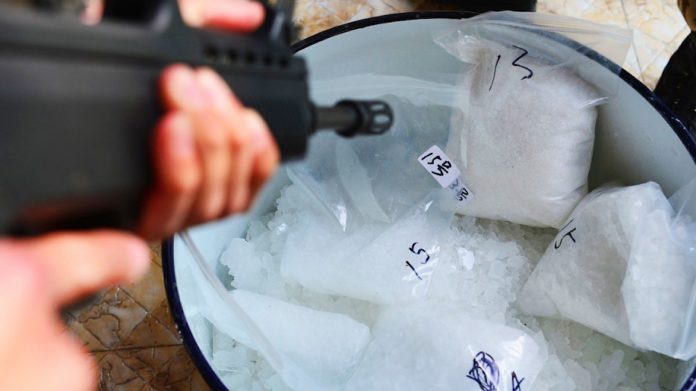 Between 2009 and 2014, methamphetamine seizures reported in East and South-East Asia almost quadrupled, according to the most recent report by The United Nations Office on Drugs and Crime (UNODC). Crystal meth, a highly addictive stimulant, has been most widely blamed by Philippines officials for the high crime rates and other social ills. So where is it all coming from?

The drug is used and distributed globally, but its two most dominant regions are Asia and North America. The United States saw its use of methamphetamine, classified as an amphetamine-type stimulants (ATS), peak between 1995-2002. However, in China methamphetamine use is a more recent occurrence with available indicators showing that it remains in a near parabolic growth phase.

President Rodrigo Duterte claims that all the materials are from (Lahat ng materials galing sa) China. Blaming the Chinese drug cartels, the President says the shabu, or methamphetamine manufactured in mainland China are the drugs most widely distributed in the Philippines.

The UNODC shows that China is indeed not only one of the biggest users, but also a hub for meth manufacturing and distribution in Asia.

Now four months into President Rodrigo Duterte’s war on narcotics since he took office in late June, some 730,000 suspected narcotics users and dealers have turned themselves in or been arrested nationwide.

It has been reported that some of the drug syndicates cook methamphetamine from inside ships originating from China. The contraband is then dropped off by the ships in pre-determined locations and picked up by local buyers through GPS tagging.

In August, China’s ambassador to Manila said the Chinese government was seeking information from Filipino authorities to help capture suspected Chinese drug traffickers in the Philippines and wanted a stronger anti-drug accord to fight the criminal activity.