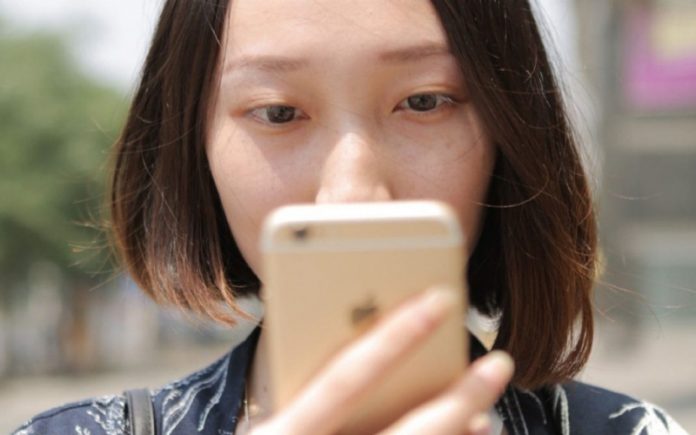 The nature of China’s social media environment lets Beijing turn South Korea-bashing into a viral trend and celebrities and companies are cashing in.

China’s longstanding opposition to the installation of THAAD missile defence systems in South Korea boiled over this week, as a slew of measures targeting South Korean businesses and products were enacted. While South Korea and the U.S see THAAD as an important counter to North Korea, Beijing fears that the system could also be used to target Chinese assets in the region. The THAAD issue has been a long drawn-out affair, and as the weapon system finally arrives in South Korea, China has reacted with a vengeance.

At the center of the storm is South Korea’s Lotte conglomerate, whose decision to provide Seoul with one of its golf courses as a THAAD deployment zone has made the company the main target of Beijing’s ire. The company’s duty free website was harried by DDoS attacks, and the Lotte China website has been suspended. Moreover, 55 stores – more than half of the company’s locations in China – have been closed down after failing regulatory ‘inspections.’

Interestingly, the backlash against Lotte is so severe that Japan’s Rakuten Global Market publically denied any affiliation with Lotte on its official Weibo microblog: Rakuten and Lotte are spelt the same, but pronounced differently in Mandarin. Rakuten is trying to prevent a branding nightmare as Chinese consumers avoid anything Lotte-related.

A joint venture between Lotte Shanghai Foods and Hershey has also been ordered to stop production. The month long shutdown could cost the venture $3.5 million in lost revenue. This is also an important milestone in the controversy as it is the first time an American company has become entangled in the issue. 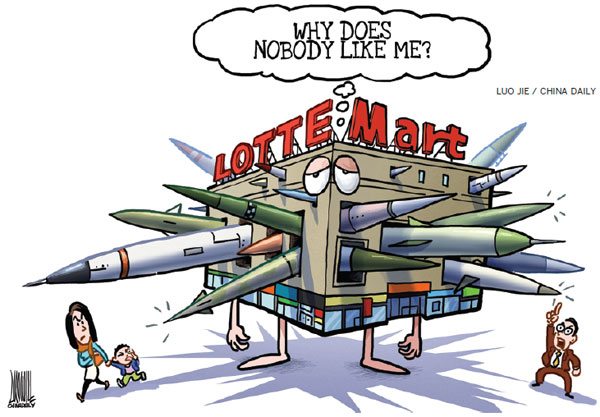 Indeed, despite America’s role in Seoul’s THAAD deployment, Washington has escaped China’s backlash with South Korea taking the full brunt instead. China is extremely wary of pulling the U.S into this kind of retaliatory tit-for-tat, especially since the election of Donald Trump. This was especially true this week, as Chinese tech giant ZTF was handed a $1.19 billion fine from the Trump administration for breaking U.S sanctions, which saw ZTF sell American telecommunication equipment to Iran and North Korea.

China is actively downplaying this story, while focusing on South Korea’s actions in order to play the role of victim and stir up nationalist sentiments. The government-controlled Global Times outlined China’s retaliatory framework: “We should start from increasing sanctions toward Seoul in an orderly way, comprehensively lower the level of Sino-South Korean exchanges [and] roll back all privileges that Seoul has gained from China [sic].”

To this end, China has frozen new licences for South Korean video games, and has instructed travel agencies to stop selling tour packages to South Korea starting March 15th. As a result Korean Air has already seen a 10% increase in cancellations for flights between March 7th and April 30th. Popular Korean music and television series have also been removed from streaming services. Individual Koreans are also not immune, with soprano Jo Sumi’s China tour cancelled due to visa delays. Similarly, pianist Paik Kun-woo’s performance with the Guiyang Symphony Orchestra, scheduled for March 18th has been cancelled, and ballerina Kim Ji-young has been replaced as the lead role in the Shanghai Ballet’s April performance of Swan Lake.

China is targeting Korean cultural exports in an attempt to undermine Seoul’s soft power on the mainland. With the entertainment and cultural trade deficit between the two firmly in Seoul’s favour, China is turning the popularity of Korean products into a weapon against South Korea. Specifically, Beijing is using the pervasive nature of South Korean products and entertainment to raise awareness of the THAAD issue, as well as mobilize ordinary citizens to take a stand.

While the government would have limited success spreading awareness of complicated foreign relations issues through traditional means, Beijing can piggyback on the popularity of Korean products. By tying a simplified version of the story (Korea is insulting us, boycott them) to the ubiquitous host of Korean shows, music, films and other products, the government can engage with (especially) China’s youth – the very people most in tune with Korean soft power and fashions, and the very people the government needs in order to maintain its legitimacy. Korean soft-power is a major player in China: the romantic drama Uncontrollably Fond alone has 4.1 billion views on China’s Youtube, Youku. 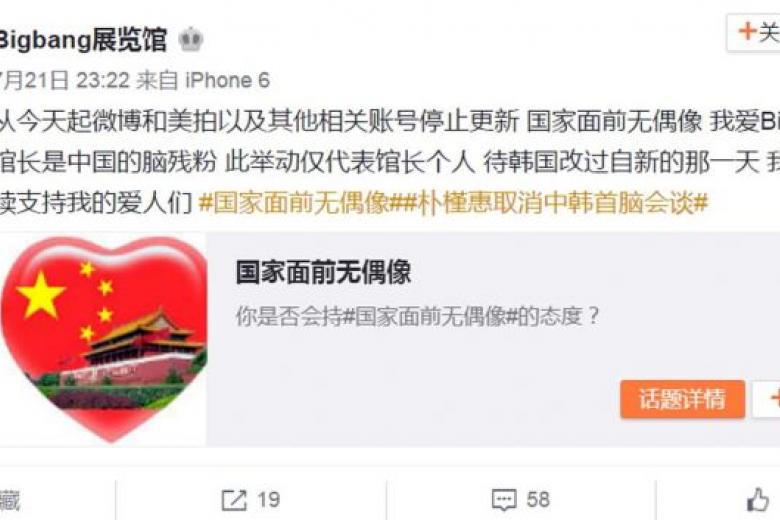 This is not the first time that Korean cultural exports have become a political issue, with Beijing warning citizens last year about the popularity of Descendents of the Sun. The government claimed that “watching Korean dramas could be dangerous and may even lead to legal troubles” during a time of heightened THAAD-related tensions in 2016. Similarly, the slogan “no idols before country” became a trending hashtag in the summer of 2016 as tensions with South Korea saw many Chinese K pop and TV fans unfollow their hitherto favourite Korean celebrities; such as boy bands BigBang, EXO, iKON, and actors Song Joong Ki, Lee Jong Suk and Park Shin Hye.

While the government has argued that any calls for a boycott are purely voluntary measures undertaken by the public, the fact that the Central Committee of the Communist Youth League’s Weibo account is calling for a boycott undermines this claim. China’s limited social media environment, dominated by domestic apps and websites combined with strong government oversight allows Beijing to engineer viral trends other states can only dream of. Key to this is are the legions of cyber warriors, collectively known as China’s internet volunteer militia.

Founded in 2013, these groups of pro-government activists have taken up the call of air force colonel Dai Xu who urged netizens to treat online ideological debates as real wars. These internet militias have helped flood Weibo and other social media platforms with anti-Korean rhetoric and calls for boycotts.

Once this anti-Korean activity hits a critical threshold, the government needs only to sit back and allow the viral nature of social media – which is no different in China than in California – to take over. Prominent social media stars such as beauty and lifestyle blogger Ayawawa have now become involved, exhorting their followers to join their boycott efforts. To this end Ayawawa has stated she is removing all South Korean products from her store, and has urged her 2.7 million followers to do the same.

Despite admitting that she had not initially been familiar with the THAAD issue, she felt compelled to do something after seeing the momentum and impassioned discussion online. “I don’t want THAAD to be installed, I won’t go to Lotte. I will cancel my trips to South Korea and stop cooperating with Korean companies […] every penny we spend is a vote on our future world,” Ayawawa stated on Weibo. There is currently significant potential for social media personalities to grow their brand and increase follower numbers by touting their nationalist credentials online, taking advantage of the issue’s viral nature.

Similarly, Chen Ou, CEO of cosmetic website Jumei Youpin has made similar overtures, stating that “we have taken all the Korean products off our shelves and we’ll only sell them over my dead body.” By jumping on the Korea-bashing bandwagon, celebrities and companies alike can associate their brands with an emotional and trending story. This drives brand awareness and firms benefit from an uptick in emotional purchasing decisions, as consumers buy into viral marketing.

This trend is exemplified by the decision by Weilong Latiao to remove its snack products from Lotte stores. Given that over half of Lotte’s stores are closed and the rest suffering massive drops in customer flow, this is hardly a painful decision for Weilang. Indeed, the move paid off as pictures of shelves devoid of Weilong products went viral on Weibo, with the company being praised for its patriotism. The company has also seen increased sales of its spicy stick snacks (now China’s version of ‘freedom fries’) as patriotic Chinese reward the company for its marketing strategy. Weilong even garnered praise from the government via a flattering article in the People’s Daily newspaper. Rival Taodo has also since announced it has pulled its snacks from Lotte stores, in a bid to copy Weilong’s marketing success.

Other Chinese companies have also followed suit, such as electronics maker Pisen, whose social media accounts declared “Brother Weilong has set the right example for us. As another national business, Pisen salutes you!” Other companies cashing on the viral trend include Xiaomi, Little Pig Rentals, Yizi Jobs, Malan Mount and many others.

Boycotting South Korea has become a strange mix of viral awareness raising a la Ice Bucket Challenge, combined with a slacktivist take on geo-politics akin to KONY 2012. Alongside the viral marketing value of the whole endeavour, the social media storm against South Korea also highlights the role of clicktivism / slacktivism. These terms have been coined to describe emotionally driven token (and ultimately meaningless) acts of ‘activism’. Buying Weilong’s spicy snacks or unfollowing your favourite K-pop star is not going to change Seoul’s defence policy, but it allows ordinary Chinese to feel like they are engaged and striking a blow against perceived insults.

These painless acts allow Chinese netizens to feel empowered, while simultaneously draining their motivation to both protest further (the form of which Beijing cannot predict) or criticize the government’s overreach on the issue. Pressuring companies to drop popular Korean products could have easily backfired on Beijing, since many Chinese households consume them. Yet their very popularity proved instrumental in shaping the issue as one that affects ordinary citizens. By connecting THAAD to K-pop, Beijing masterfully co-opted social media, drawing in average consumers and showing them that nationalism is just a click away.