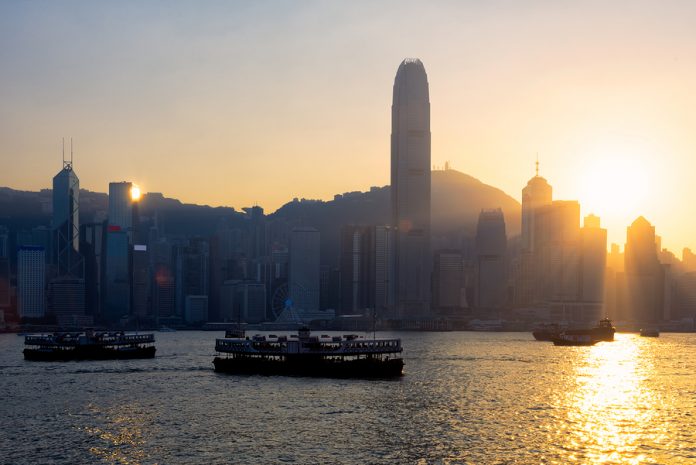 It should have been a blockbuster, but the Party has a meeting

On September 23, news media began to report (link in Chinese) that the release date of director Feng Xiaogang’s 冯小刚 latest film, Youth (芳华 fānghuá), in China had been mysteriously postponed. Youth was originally supposed to premiere on September 29, during one of China’s most lucrative holiday movie slots, the National Day holiday weekend.

Ever since the news about the movie’s indefinite postponement broke, speculation on the reasons behind the axed release has been rife. While neither Feng nor Huayi Brothers Media, the main investor behind Youth, have offered any official explanations for the movie’s delayed premiere, many suspect that the reasons are most likely to be politically motivated (in Chinese), a conjecture that seems only to be strengthened by Feng’s Weibo post (in Chinese), which rebukes claims that the movie’s nixed release was a publicity stunt or due to poor ticket pre-sales. 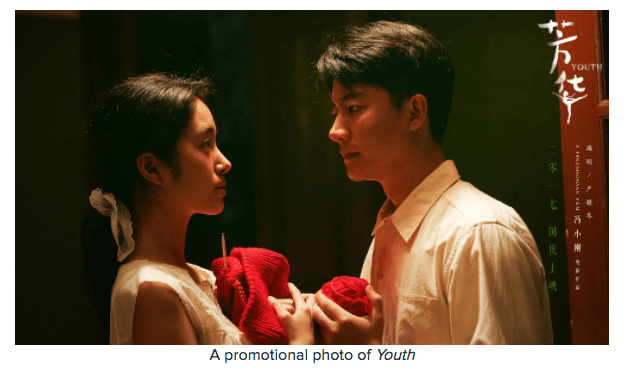 This is not the first time that Feng’s movie has secured a coveted release slot during the National Day holiday, only to later lose it. Last year, Feng’s I Am Not Madame Bovary (我不是潘金莲 wǒ bùshì pānjīnlián) was scheduled to premiere during the holiday, but at the eleventh hour, its release date was bumped to November 18. Unlike I Am Not Madame Bovary, however, Youth’s postponed release may have come straight from the commands of political leaders, as USC professor and China specialist Stanley Rosen opines. While Youth had already gained clearance from China’s movie censors before its premiere, the fact that Feng’s latest movie deals with previously taboo subject matters such as the Cultural Revolution and the 1979 Sino-Vietnamese War may have still struck a nerve with China’s high officials, especially since the movie’s original release date landed close to the 19th Party Congress, which is scheduled to begin on October 18.

For the past few months leading up to the National Party Congress — a highly sensitive and politically symbolic event for the Communist Party that is held every five years — China’s administration has ratcheted up its control over media and entertainment content to ensure that no signs of dissent or discordance will mar the Party’s promulgated vision of nationalistic unity. And it will seem that Youth, despite the director’s insistence (link in Chinese) that the movie explores — rather than glorifies — the brutalities of war, may have just seemed too politically risky for government officials to chance.

These days, it would seem that directors and movie reviewers in China just can’t get along. On September 20, director Meng Qi 孟奇 accused (link in Chinese) several reviewers of posting malicious reviews of his movie Women Soldiers (娘子军传奇 niángzǐ jūn chuánqí) on Douban, one of China’s most popular movie rating websites, months before his movie had even been released in China’s theaters. In his Weibo post, Meng described these reviewers as “parasites” and claimed that the reviewers were extorting him for money in exchange for removing the negative reviews of his movie from Douban.

A few days later, grievances that Da Peng 大鹏, the director of City of Rock (缝纫机乐队 féngrènjī yuèduì), had against famous online reviewer with the username February Bird Speech 二月鸟语 (èr yuè niǎo yǔ) were made public when Da Peng’s private messages to a group of his friends on WeChat were reported (in Chinese) by Mtime. In his WeChat message, Da Peng claimed that February Bird Speech, an “ingratiating idiot claiming to be a film critic,” had given City of Rock a one-star review (in Chinese) on Douban without even seeing the movie and threatened physical violence against the reviewer. February Bird Speech proceeded to defend himself on Weibo (in Chinese), accusing the director of defamation of character and proclaiming that he had proof that he had seen the movie (1.6 times, to be exact, since he left the movie before its ending the first time and then saw it in its full length for a second time) before he gave City of Rock his final review on Douban. 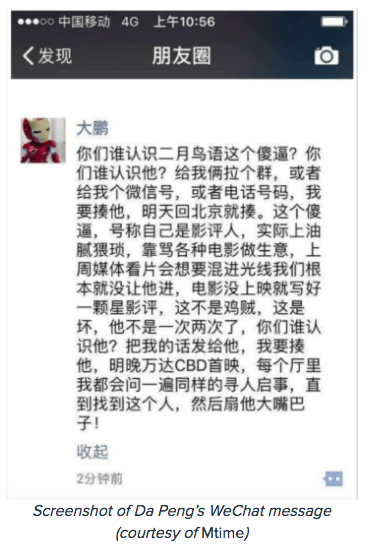 Neither of these public brawls are isolated incidents and are, instead, symptomatic of the fraught relationship between moviemakers and movie reviewers in China, a country where the profession of film reviewers has yet to establish a secure standing in the industry and fraudulent reviews on the internet, either working for or against a movie, are fairly common. Film reviewers, however, are not the only ones that are being excoriated by filmmakers these days. Last week, Douban was publicly criticized (in Chinese) by the producers of Pure Hearts: Into Chinese Showbiz (纯洁心灵 chúnjié xīnlíng) for a 2.7 rating that the producers believed to be “impossible” and “contrary to the positive reception they had received from professional experts.” According to the producers, Douban’s erroneous rating hurt the movie greatly at the box office and in their letter to Douban, they sought a public apology as well as financial compensation.

Over the past few years, there has been grumbling, from both the entertainment industry and the general public (in Chinese), that stars were being paid excessively high salaries, so much so that it was beginning to compromise the quality of many film and TV productions. When most of the production budget is being allocated to star remunerations, that leaves little room for areas like screenwriting, directing, and production design, etc., as pointed out (in Chinese) by Beijing Youth Daily. According to (in Chinese) the paper, star salaries take up, on average, 50 percent of the expenses of Chinese TV productions nowadays, and there are even cases when they occupy a whopping 80 percent of a production’s total costs.

Yet, soon, this may no longer be the case. On September 22, the China Alliance of Radio, Film, and Television issued guidelines to cap exorbitantly high cast salaries. The guidelines state (in Chinese) that the salaries of actors are no longer allowed to exceed 40 percent of total production costs. In addition, the wages of leading actors are limited to no more than 70 percent of the casting budget. While China’s media regulator, the State Administration of Press, Publication, Radio, Film and Television, has, over the past two years, issued notices denouncing (in Chinese) the sky-high salaries of actors and advising (in Chinese) TV broadcasters and streaming sites to not acquire content based solely on a show’s star casting, this is the first time a cap on star salaries has been explicitly codified in industry guidelines.

Pang-Chieh Ho is an editor at Digg.