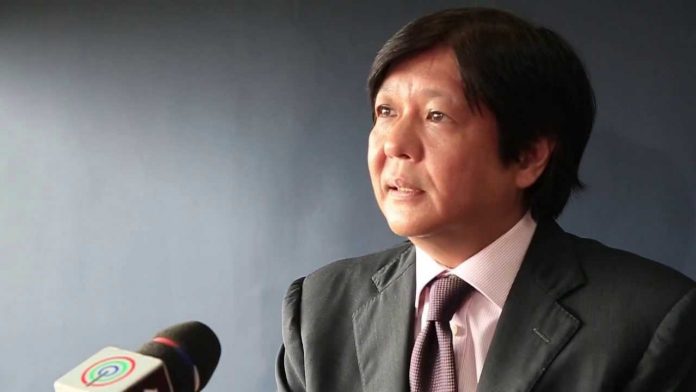 While on a four-day state visit to China in October 2016 to meet with President Xi Jinping, Duterte publicly announced Bongbong’s electoral appeal to the Supreme Court, saying the former senator would be the new vice president if the PET rules in his favor. Bongbong in addition to his sister, Imee Marcos, Governor of Ilocos Norte, were both last minute additions to the delegation to Beijing.

Shortly thereafter Bongbong lodged an electoral protest against her before the Presidential Electoral Tribunal (PET) on 29 June 2016, a body composed of magistrates of the Supreme Court.

On 21 November, Robredo’s spokesperson Georgina Hernandez stated that she had received a text message from a “trusted source” saying that an alleged recount of ballots from four to five provinces will start later this month and end in December.

“The objective is to steal the vice presidency from VP Leni,” Hernandez said in a statement.

Senator Paolo Benigno Aquino IV made a similar statement on Saturday 19 November saying that the possibility of Marcos “stealing” the vice presidency may not be farfetched following the controversial burial of his father at the Libingan ng mg Bayani last Friday.

The Marcos camp claims that serious discrepancies were noted in Lanao del Sur, Maguindanao and Basilan. Based on these allegations, they have petitioned to nullify the election results in these three locations, and are seeking a recount of votes in 39,221 clustered precincts in 25 provinces and 5 cities.

Numerous candidates that suffered defeat in previous elections have also filed before the PET, but all past cases have all been routinely dismissed. However, many believe that the surprise hero’s burial of Ferdinand Marcos on 18 November was part of a number of surreptitiously planned steps in the Marcoses’ path back to power.

Despite public opposition, the Supreme Court recently dismissed a petition filed by human rights groups and victims of martial law blocking the permission granted by President Duterte to the Marcos family to bury the late president of the Philippines. Many now believe there are more surprises to come from the Supreme Court.

Just days after the burial, Marcos filed yet another case to try and overturn the results of the May 2016 election. This time a motion has been submitted to the Department of Justice to review the dismissal by the Manila Prosecutor’s Office of the cybercrime charges made by the Marcos camp against technology provider Smartmatic’s. The charges claimed that unauthorized modifications were made to the election servers – the hardware responsible for transmitting votes in May’s national elections.

The charges were filed by Jonathan dela Cruz, Marcos’ campaign adviser, against two executives and an employee of Smartmatic, as well as several employees of the Commission on Elections (Comelec).