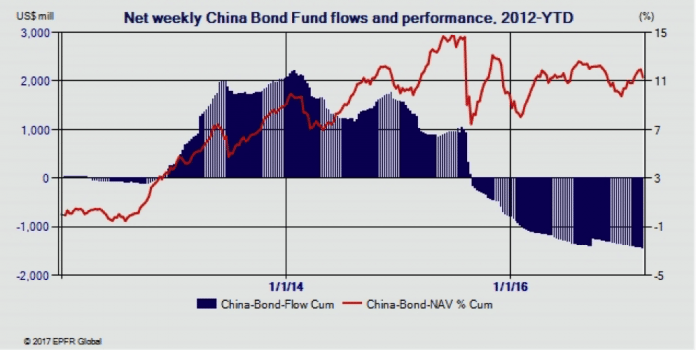 Since the onset of 2016, China bond funds have seen capital outflows

According to EPFR Global Research, China bond funds (DSUM) (KCNY) have been witnessing outflows for more than a year now. The flight of capital from China (FXP) (CHAD) is attributable to a growth slowdown and the slew of reforms that the government together with the regulator have initiated to de-risk the economy’s financial system. China’s latest initiative, the Bond Connect program, is intended as a step towards reversing this trend. 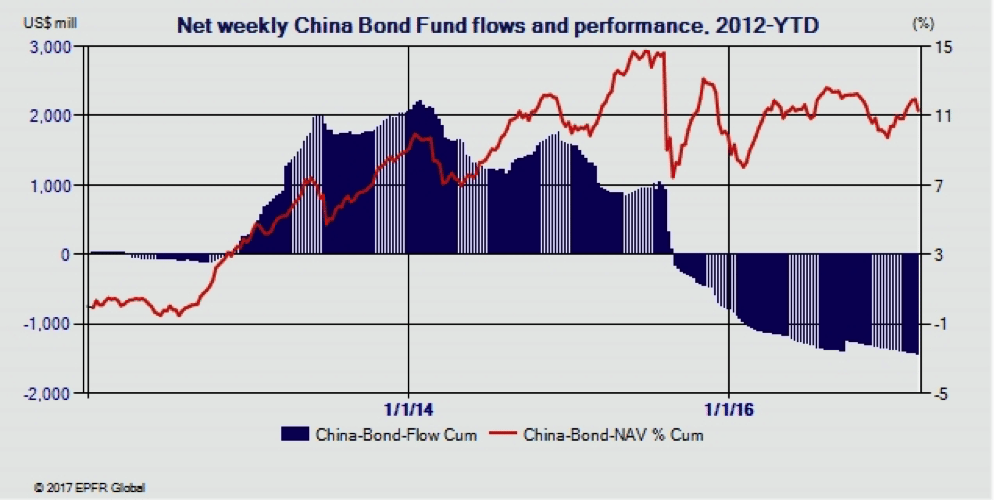 Despite the exodus of capital, China (FXI) (YINN) remains the third largest bond market in the world. An interesting fact about Chinese bonds is that a vast majority of bonds in mainland China are rated as Triple A by the mainland rating agencies because these are state-owned giants, with credit underwritten by the government.

Presently, bonds in China are traded on the China Interbank Bond Market (CIBM) and the domestic stock market, with CIBM capturing the larger share of the market. In February 2016, China opened up the CIBM to foreign investment. This resulted in about 90% of the notes on the CIBM being traded to overseas fund managers. However, there remain a number of fundamental issues that need to be tackled to make the market more attractive to foreign investors.

China has now embarked the launching a bond connect scheme linking China’s $8 trillion bond market with overseas bond investors (BNDX) (VWOB) via Hong Kong (EWH), as announced by the Premier of the State Council, Li Keqiang. Scheduled to be launched this year, the bond-connect program is one step ahead, as it will allow the global institutional investors to bypass onshore mainland licenses and trade via Hong Kong, thereby avoiding the trade settlement procedure.

According to Goldman Sachs (GS), if Chinese bonds were to be included in three key benchmarks, this Asian (AAXJ) (VPL) behemoth should see inflows of about $250 billion, which will help in offshore foreign exchange outflows that to date have been in the range of $10 billion to $20 billion per month.