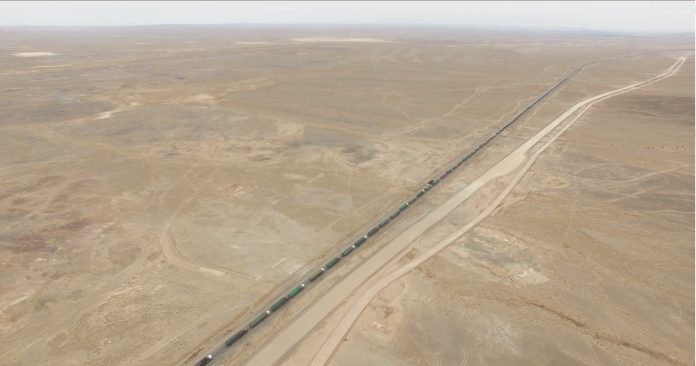 Over 60 kilometers, they line up: truck after truck, after truck. Nearly every one of them is laden with coal.

The world’s longest tailback has been building for months and has varying drivers: first, China’s drought prompted Beijing to slash water-intensive coal production; last, President-elect Donald Trump fanned revival for the least loved of commodities by casting doubt on the world’s commitment to outmode coal.

In the background, a newly installed government in Ulaanbaatar was quietly negotiating its way out of the economic crisis it inherited.

Last week, those negotiations came out into the open. Erdenes Tavan Tolgoi, the state-owned miner of the world’s largest undeveloped coal deposit, announced it had negotiated an 85% price jump in its average selling price to $50 a ton from December, rising to $60 for 2017. Mongolia had been selling its coal at only $32 as part of a settlement for debt owed to the Aluminum Corporation of China, or Chalco. In another part of Tavan Tolgoi, Mongolia Mining Corp. had already struck a deal to sell its premium washed variety of coal at $107.

So what’s the big deal? Right now, Mongolia is pleading poverty. Mounting debt has driven the government into talks with the International Monetary Fund. It’s been whacked with two credit rating downgrades in as many weeks.

Yet, sales of coal – coupled with rising earnings from the country’s other main resources, namely copper, gold and iron ore – appear destined to rescue this nation of 3 million people, with or without foreign handouts.

How much annual revenue will 48.6 million tons of coal exports bring to Mongolia? Based on a mid-price between the $60 and $107 so far achieved at Tavan Tolgoi, the consignment at $83 a ton equates to over $4 billion – just from coal.

In a report published by Frontera News earlier this month, Nick Cousyn, the Chief Operating Officer for BDSec, Mongolia’s largest broker and investment bank, arrives at a similar conclusion, albeit via a different route:

“At an average price of $105 per ton, that would represent more than $4 billion in economic activity for the sector – or an increase of over $3 billion compared with an estimated $960 million for 2016. For Mongolia’s $12 billion economy, this would mean a 25% jump in GDP, returning the economy to the type of dizzying growth rates seen last decade.”