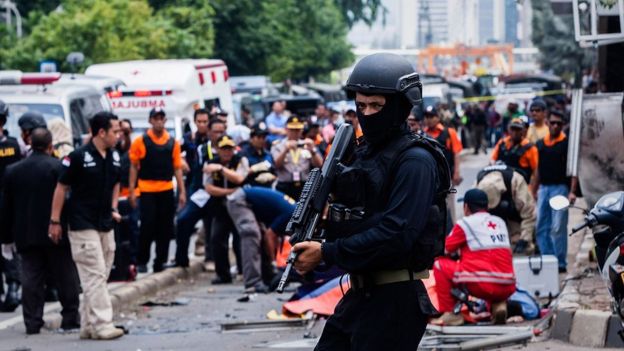 Indonesia’s former President Suharto has much to answer for but he kept religiously motivated violence at bay – in his early years, at least.

The secular authoritarian’s strong-arm tactics left little room for Islamists to foster influence. But as his power base waned, Suharto later appointed politically conservative Muslims to high ranks in the government and military, lending tacit support to Islamic extremists.

This influence has remained entrenched ever since. Despite liberalization, sectarian tensions and corruption have continued to plague government affairs – creating an environment ripe for radical Islam.

In the past decade, local groups such as Jemaah Islamiyah have developed into a serious regional threat by linking with al-Qaeda and subsequently Islamic State. Governments have attempted to keep the issue localized by granting the implementation of Sharia Law within the northern Aceh region, for example. But instead, the Islamist groups are going global.

Take the East Indonesia Mujahadin, or MIT. It’s had strong links into Syria since 2013 and is frequently featured in the international jihadist media. The group’s leader, Abu Wardah al-Syarqi, also known as Santoso, declared allegiance to Islamic State in July 2014.

MIT further affirmed its position earlier this year by carrying out the first major terrorist attack in Indonesia in six years. On Jan. 14, five MIT members attacked at the Sarinah shopping mall in central Jakarta. Although far from “successful,” it had the hallmarks of ISIS: The planting and specific positioning of explosives; the use of a gunman in addition to suicide bombers; the selection of a soft, tourist target to inflict maximum fear. Investigations revealed that the attack was the work of an organized cell supported by ISIS.

The attack was originated, funded and driven by Bahrun Naim, an Indonesian national living in Raqqa, who is the main liaison between MIT and ISIS in the Middle East. He regularly issues high profile messages calling for Indonesians to travel to Syria. Naim is also understood by security forces to have been behind the July 5 suicide bombing of a police station in Solo in Central Java.

President Widodo’s administration committed over 2,500 security personnel – more than half of its elite Densus 88 unit – to capturing Santoso. He was killed in a fire-fight with security forces.

But his death doesn’t expunge MIT’s threat. In the past, a major portion of its revenue has come from local supporters, and the group has been careful to avoid civilian causalities in order not to deter donors. That makes the Jakarta attack all the more alarming. It strongly indicates MIT believes it’s no longer dependent upon local funding sources. It would appear that the income and support now offered from ISIS has allowed MIT to completely evolve its objectives, becoming the most active extremist group in Indonesia in the past few years.

Consequently, MIT poses a grave threat to Indonesia and is a group that must be closely monitored. Here are some of the other key terrorist groups:

Although not the most dangerous at present, Jemaah Islamiyah is undoubtedly the most prominent extremist organization in Indonesia. The group is responsible for the majority of terrorist attacks to occur in the country in the past 15 years.

It was formed as a splinter group in the 1980s following a crackdown by the government against Darul Islam, an indigenous terrorist outfit seeking to create an Islamic State of Indonesia.

After re-establishing headquarters in Indonesia, the group carried out a series of terror attacks, including the car bomb beneath the Jakarta Stock Exchange and Christmas Eve bombings of 2000, the Bali Bombings of 2002 and 2005, and the JW Marriot / Ritz Carlton hotel bombings of 2009. Its attacks were focused against Christians and westerners.

Before the 2002 Bali bombing, Indonesia refused to acknowledge the existence of extreme terror threats within its borders. But with nearly 200 people killed, the government was catapulted into a crack down on Jemaah Islamiyah. By 2003, the security forces had identified and captured Jemaah Islamiyah’s operational chief, Nurjaman Riduan Ismuddin. Over the next few years, an aggressive counter terrorism campaign by the government’s police and security forces resulted in hundreds more members and supporters being arrested and jailed. In 2008, three out of four of the main suspects behind the Bali bombing were executed.

For the past 40 years, the north of the Indonesian island of Sumatra has been plagued by a separatist conflict. The campaign for independence in the region of Aceh began in 1976 when a former Darul Islam member, Hasan di Tiro, established the Free Aceh Movement. By 1999, the group had fostered between 15,000 and 27,000 members. Its fight against security forces cost an estimated 15,000 lives.

In 2005, after long negotiations with the government, a peace agreement put an end to the near 30-year insurgency. Both sides agreed to de-escalate and government forces withdrew from the region. Aceh was granted special autonomy. The provincial government enforced Sharia law – criminalizing alcohol consumption, homosexuality, gambling and adultery. It required boys and girls to be taught separately in school.

In the past two years, an estimated 8,000 Christians have been displaced, driven out by mobs of local Muslims attacking churches and demanding their closure. Rather than punishing such violence, local authorities have demolished more churches. Sharia Law was meant only for Muslims in Aceh, however this year the first non-Muslim – a Christian – was caned 30 times in public for selling alcohol. The region continues to become stricter and more abrasive in terms of enacting its stringent Islamic codes.

As the only region in the country that abides by Sharia law, Aceh has become a focal point for spreading radicalism in Indonesia. It’s already a recognized hotspot for Jihadi training camps for numerous extremist groups operating across Southeast Asia, including Jemaah Islamiyah since 2009, reducing the necessity to send fighters to the Middle East for training.

Tomorrow, the 2nd part of Indonesia’s ISIS Fight, addresses how a jailed ally of Osama Bin Laden can still be preaching.