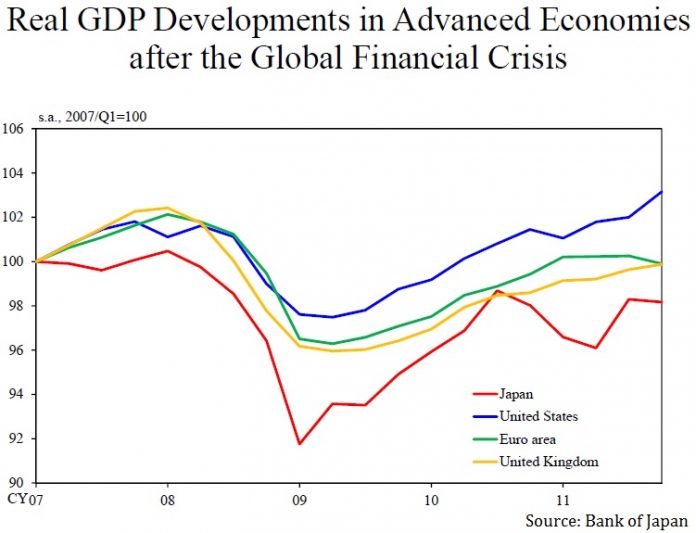 Bank of Japan versus the Great Recession

We had outlined the concept of QE (quantitative easing) in the previous article of this series. Japan can be called the birthplace of QE, given the length of time it has spent in battling deflation.

The Bank of Japan had introduced modern day QE in March 2001 when it began purchasing JGBs (Japanese Government Bonds). In five years, it started seeming that the central bank was winning its fight against deflation.

However, the Great Recession hit approximately two years later and threw the central bank’s QE program in disarray. The Bank had to raise the bar, but there were some constraints.

The Bank of Japan was under pressure due to the sharp decline in manufacturing as well the appreciation in the yen. The domestic currency (FXY) had appreciated in the period following the Great Recession due to its safe-haven status, which led to its demand in testing times.

A rise in the local currency makes goods and services expensive in the international market, thus hurting exports. Further, the central bank was unable to check its rise because it did not have much room to reduce interest rates. A cut in interest rates usually leads to the home currency depreciating.

In his address to the Councillors of Nippon Keidanren (Japan Business Federation) in Tokyo on December 26, Bank of Japan Governor Haruhiko Kuroda said that the decline in the real economy in Japan was much sharper than in the US or Europe, as shown in the graph above.

It soon realized that CME would not be enough either. Then, in April 2013, QQE (quantitative and qualitative monetary easing) was introduced. Its scope was expanded in October 2014 and the Bank introduced negative interest rates in January this year.

Kuroda opined that due to powerful monetary measures, Japan is no longer in deflation, though it is far away from reaching the inflation mandate of 2%. Stock prices have rebounded and the erstwhile appreciation in the yen has corrected.

Corporate profits have registered historic high levels, business spending is getting back on track, and unemployment is at around the 3% mark.

There is something that continues to ail the Japanese economy. Let’s look at that aspect in the next article.