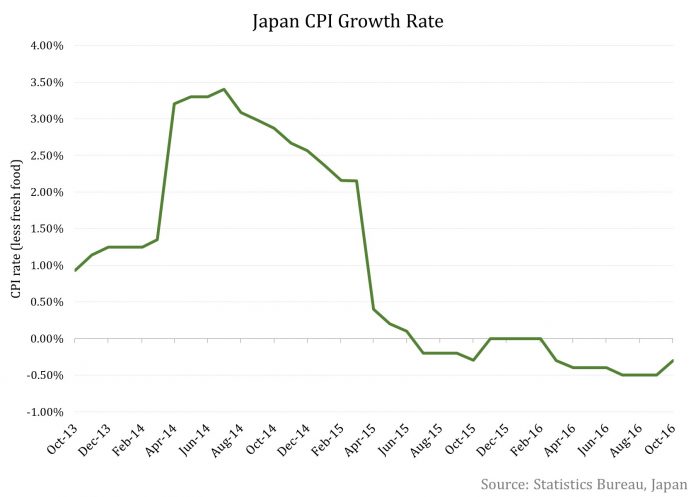 The economic situation in Japan

The Bank of Japan was of the opinion that the country’s economy is on the path to moderate recovery. Exports have benefitted due to an improvement in the economic situation in some countries.

A steady betterment in the employment and income situation has led to a rise in private consumption. Investment in houses has also improved. On the other hand, government spending has not seen any increase.

The December 2016 statement noted that an improvement in domestic and overseas economic conditions, along with progress in inventory adjustment, has led to an increase in Japan’s industrial production.

Bank of Japan’s outlook on the domestic economy

The Bank of Japan expects economic growth to nudge up a bit; this upgrade in its assessment is the first since May 2015. According to the bank, the “highly accommodative financial conditions,” put in place due to monetary stimulus measures, coupled with government spending, should help in keeping domestic demand up, with higher incomes resulting into increased spending by both households and corporations. On the external front, an improvement in overseas economies will be helpful to exports.

However, the Bank projected that consumer inflation will remain in the negative territory or flat “for the time-being.” Without reference to any particular duration, it said that as energy prices recover, output-gap improves, and medium to long-term inflation expectations rise, consumer prices will rise toward their mandate pace of 2% annually.

Price rise would not only please monetary policymakers, it could help Japanese equities (DXJ) (DBJP) as well, which had done excellently in 2015.

In the next article, let’s look at how developments in the US have pleased Japanese policymakers in recent times.