Russian equities had ended 2016 exceptionally well with the MSCI Russia Index up nearly 49% for the year. Only indices for Peru and Brazil had done better than that for the year (ERUS).

It had also begun 2017 with a lot of hope. Crude oil prices (USO) (BNO) were up, boding well for a country with one third of its budget revenue driven by oil and gas. However, that hope did not translate into equity returns in January as the MSCI Russia index was down 0.3% for the month.

But the minor decline in January was nothing compared to February when the MSCI index fell 6.4%. Russia’s benchmark equity index, the Micex, fell 8.2% for the month – the poorest showing since December 2014. 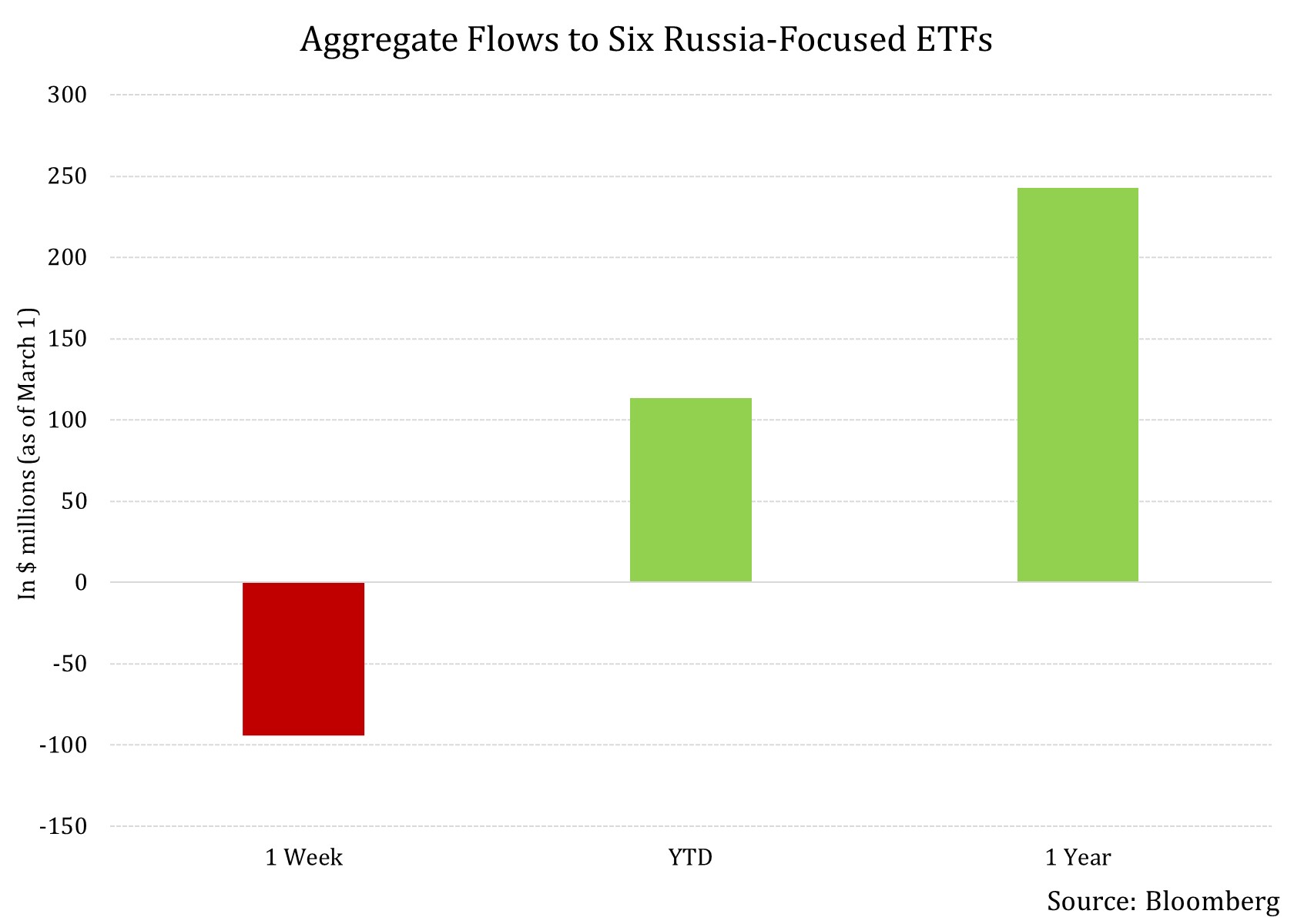 One reason behind the decline

One of the reasons why Russian equities had done well late in 2016 was the election of U.S. President Donald Trump. Russian President Vladimir Putin had voiced support for Trump when the latter was campaigning for the presidency. Markets initially believed that there was a chance U.S. economic sanctions against Russia could be dropped after having been in place since 2014 following its annexation of Crimea.

However, that buying sentiment seems to have run its course.

Reflective of investors’ mood is the fact that the VanEck Vectors Russia ETF (RSX) – the largest and most traded ETF investing in Russian equities available to US investors – has seen sizable outflows towards the end of February.

According to Bloomberg data, the $2.6 billion ETF saw outflows amounting to $34.6 million on February 28, marking the third successive day when investors took out money from the fund. The firm also informed that since February 21, RSX has lost $111 million, or 4.3% of its current market cap.

The fall in Russian stocks, along with outflows from the RSX, have to be considered in light of the superlative showing in the past year. Given the sharp uptick, some correction was to be expected, especially in light of the political situation and the way it has evolved. Further, given that RSX attracts the highest trade volume among ETFs investing in Russian equities, it should not have been a big surprise that it would see outflows.

But this does not mean that this outflow, or the poor performance of Russia stocks in February, is necessarily indicative of a downward trend going forward.

According to Bloomberg data, except for the Direxion Daily Russia Bull 3x Shares (RUSL) which is a leveraged ETF, five other Russia-focused ETFs have attracted inflows in the past one year. Further, even in 2017 so far, expect for the RUSL and its bear version – the RUSS – and four other Russia ETFs have seen inflows, led by the RSX.

Some asset managers continue to be bullish of Russian equities. Gerardo Rodriguez, a Portfolio Manager for the Emerging Markets group at BlackRock, cites the improvement in the macroeconomic picture of Russia as one of the reasons that he’s overweight Russian stocks.

This decline may not be much more than an unwinding of a speculative realignment between the US and Russia that has yet to come about. Investors should focus of Russia’s macroeconomic fundamentals and keep an eye on Brent crude before rebalancing their allocation to the nation’s stocks.