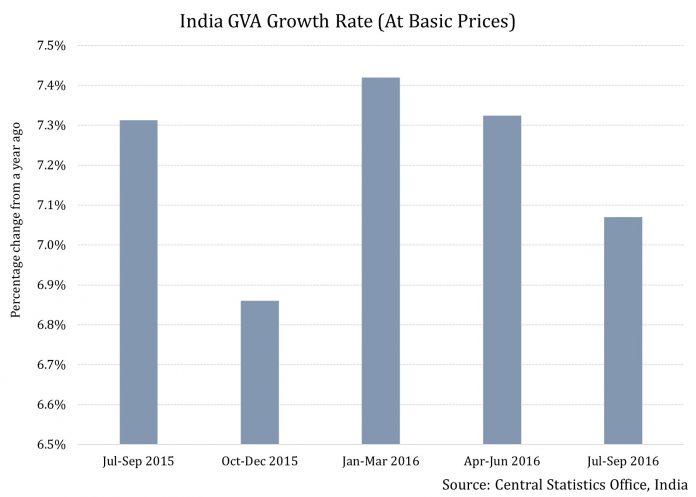 Importantly, the CSO has not talked about the impact of demonetization at all. The primary reason it has cited for the deceleration is the slowdown in the industrial sector. CSO expects the manufacturing sectors to slow to 7.4% in the current year, compared to 9.3% in the previous year. Meanwhile, it expects mining and quarrying to contract by 1.8% compared to the 7.4% growth posted last year.

India’s chief statistician T.C.A. Anant informed that bank deposits and credit data for November had not been included in calculations for GDP growth because the ongoing demonetization imitative had led to high volatility in those numbers. He opined that even after factoring in this information, the final GDP growth rate should not be significantly different.

Are the figures upwardly biased?

A growth pace of 7.1% in the current global economic environment is extremely healthy. However, it seems that there is some degree of overestimation in the numbers.

The impact of demonetization has not been factored in at all. Apart from impacting the “financial, real estate & professional services” sector, it will hurt other sectors of the Indian economy as well as seen in the previous article.

Though some negative impact on manufacturing may have already been considered, more time is needed to understand the effects on consumption.

It may not be all that bad

Demonetization has led to a decline in inflation as seen in the previous article. This has provided room for the RBI (Reserve Bank of India) to cut its repo rate further. If the benefit of this rate cut – when and if it comes – is passed on to consumers, it will lead to increased consumer spending.

Further, tax collections by the government have seen a surge post demonetization as individuals were allowed to use defunct currency notes to pay their outstanding dues. These factors will help support the economy.

Foreign investors who have redirected their investments from Indian equities (EPI) (INDA), may need to reconsider their position. The Indian economy will see some slowdown due to demonetization, but there is not much that has fundamentally changed in India. It has the opportunity to emerge stronger from demonetization, and give foreign investors an added alpha to their investment portfolio.