In China, a wholly foreign-owned enterprise (WFOE) is a limited liability company (LLC) formed solely by one or more foreign investor(s) with no mandatory requirements to have a domestic partner.

The flexibility afforded to a WFOE through Chinese policies makes it a popular form of foreign investment in China.

Foreign investors increasingly believe that China’s economic and legal development make it unnecessary to over-rely on guidance from a local partner.

Many factors make the establishment of WFOEs attractive in China, especially for businesses engaged in manufacturing or trade.

Under Indian law, foreign investors are able to establish wholly-owned subsidiary companies (WOS) in the form of private limited companies if they operate in sectors that permit 100 percent foreign direct investment (FDI).

In India, both 100 percent foreign-owned private limited companies and joint venture companies are governed by the same regulations. The Companies Act, 2013, regulates joint ventures (JVs) and wholly-owned subsidiaries in India.

In China, too, JVs and WFOEs are subject to the same general laws, such as the Company Law, 2013 and the Measures of Record-Filing for Establishment and Change of FIEs. However, there are other specific measures regulating each type of legal entity as well.

Different types of WFOEs have different registration criteria depending on their area of operation and category of industry. Some entities need pre-approval before setting up, trading WFOEs need to register with the customs department, manufacturing WFOEs need to pass an environmental impact report, among others. This is similar to the regulatory landscape in India.

The specifications for establishing joint ventures in India are discussed here.

Securing approvals for FDI in India

Foreign investment in India is regulated under the Foreign Exchange Management Act (FEMA), and is allowed under two different routes – the automatic and the government approval routes. (See the Consolidated FDI Policy published in August 2017 here. This has been amended in January 2018, which can be seen here.)

In both India and China, the scope of the business – the company’s intended activities – dictate the need to establish either a 100 percent foreign ownership or the requirement of additional national investors.

For example, any sector in India that attracts an equity cap or falls under the 49 percent government approval route for FDI needs an Indian investor to be involved within the business.

A business eligible for 100 percent automatic FDI requires no prior approval.

Setting up in India versus China

Setting up a private limited company / wholly-owned subsidiary in India differs substantially from the WFOE set-up in China.

The standard setting up process in India is known as the ‘automatic route’, which involves a comparatively easy establishment process.

Under this route, 100 percent investment is allowed in certain sectors, as per the Master Directions issued by the Reserve Bank of India (RBI).

For these sectors, no specific approval is required prior to setting up the entity, making the establishment process quite simple.

The investors are only required to notify the RBI within 30 days of the receipt of inward remittances and file the required documents with that office within 60 days of the issuance of shares to foreign investors.

For sectors that fall under the approval route, sectoral investment caps are defined, and investment requires government approval.

In this case, there is a separate set of procedures to be followed.

Among other things, the company must obtain approval for investment from respective ministries or administrative departments through the Department of Industrial Policy and Promotion (DIPP).

To improve the ease of doing business in India, the Indian government now allows 100 percent automatic FDI in most sectors.

In China, more industries are being opened up to FDI, such as the automotive and insurance sectors. The country released its latest Negative List in July 2018 reducing the restrictive measures from 63 to 48, and for a Negative List for Free Trade Zones, where restrictions were brought down from 95 to 45.

Major industries that are highly restricted because of FDI caps or other laws or practices in China include finance, telecommunications, education, healthcare, internet businesses, and any industry engaged in the extraction or processing of natural resources.

In India, the FDI regime is more liberal.

In its foreign investment policy released in January 2018, the government allowed 100 percent FDI under the automatic route for single brand retail trading and construction development sectors besides introducing relaxations for investing in power exchanges and the medical devices sector.

As mentioned earlier, most sectors in India allow 100 percent foreign investment without the need for specific government approval.

Industries were FDI restrictions apply include mining, defence, petroleum refining, broadcasting services, print media, and air transport services. However, even in these sectors, investments beyond regulated caps can be made after securing government approval.

Foreign investors interested in setting up a WFOE in China or a WOS in India must follow the government’s organization structure guidelines. However, distinctions exist here as well.

A WFOE set-up requires an executive director or board of directors, at least one supervisor, and a general manager.

The Indian WOS, on the other hand, must have a minimum of two directors and between two and 200 shareholders. A shareholder can be another legal entity, such as a Hindu Undivided Family (HUF), whereas directorship is held only by individuals.

As in the case of China, the amount of paid-up capital required should be a financial exercise to determine the business’ start-up and cash flow needs. For a WOS in India, there is a minimum share capital requirement of INR 100,000 (approximately US$1,500). This has been relaxed under the Companies (Amendment) Act, 2015.

Taxation of WFOE versus WOS

India does not charge a tax on profit repatriation whereas China levies a 10 percent tax on the value of repatriated funds. Additionally, China’s labour welfare costs are higher.

However, it is also important to note that domestic companies in India are liable to pay dividend distribution tax, levied at 16.995 percent of dividend payout, which is deducted from their reserve or surplus.

Foreign investors whose countries have double tax avoidance agreements (DTAAs) with India will need to calculate their respective tax liability according to the terms of the respective DTAA. 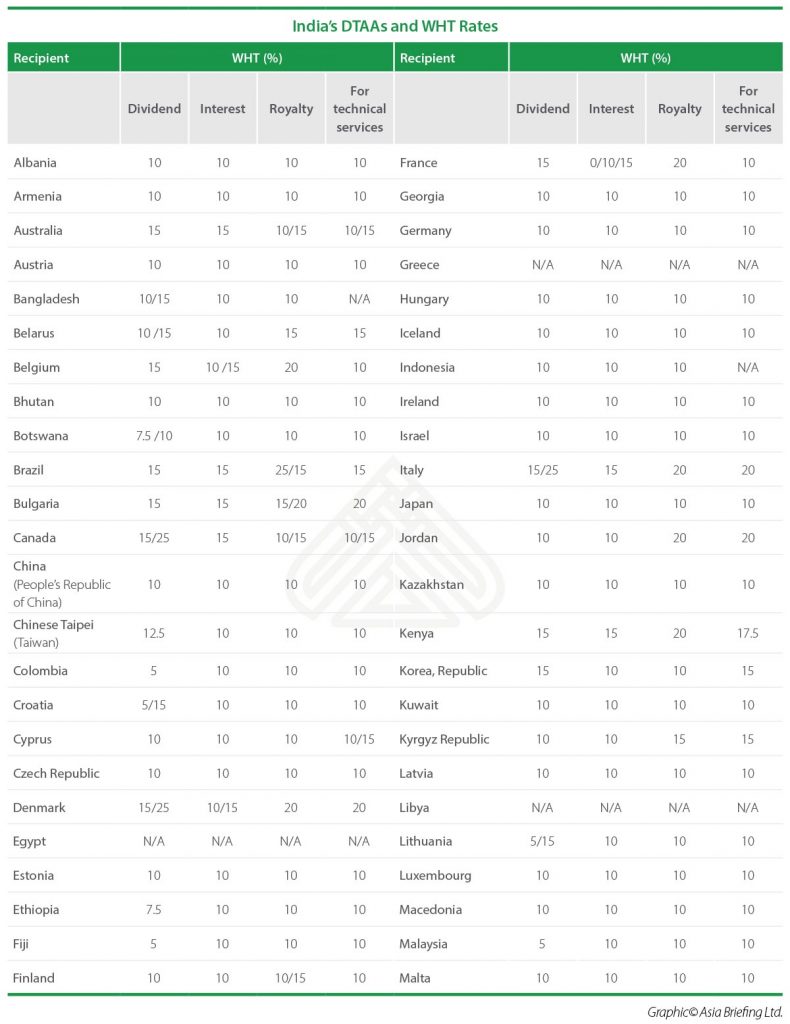 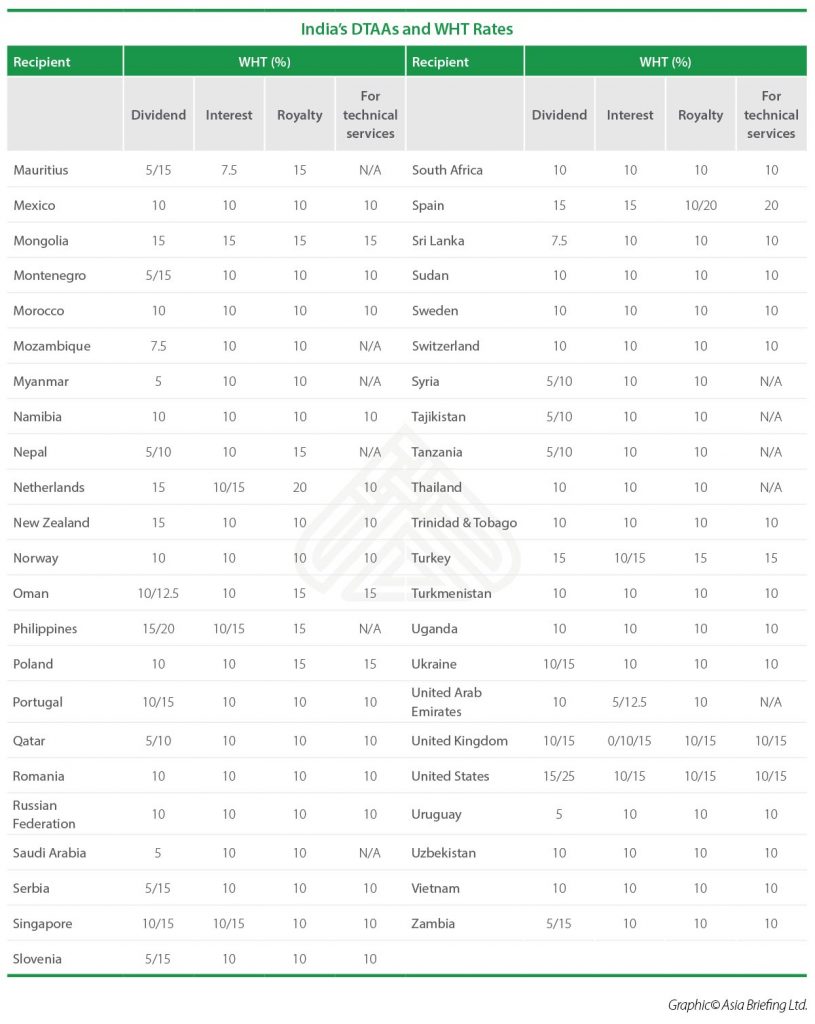