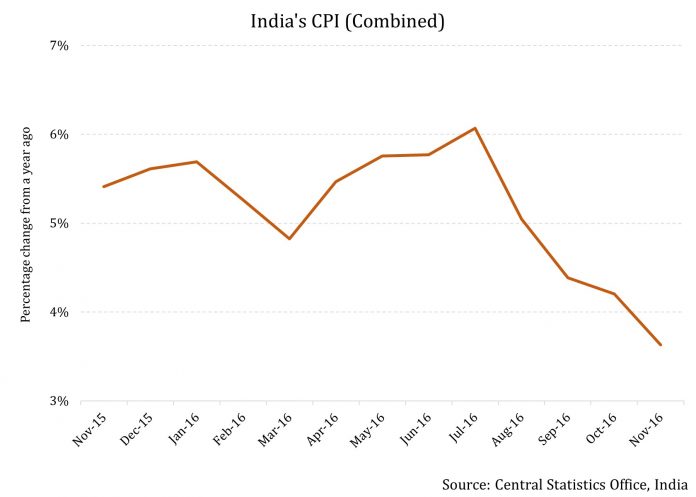 Economic growth has been robust

According to data from the CSO (Central Statistics Office), India’s GDP (gross domestic product) in Q2 2016-17, or the July-September period, rose 7.3% year-on-year. In India, a financial year begins in April and ends in March of the following year, thus making the aforementioned period the second quarter of the financial year.

In the same period, the GVA (gross value added) rose 7.1%. The relationship between the GDP and GVA is:

A downshift for the Indian economy

The most visible impact of demonetization has been on India’s services sector as the move brought domestic consumption to a near standstill. Except for essentials, consumers shut down all purchases. Discretionary and luxury purchases like real estate, autos (TTM), and durables were put on hold.

Given the major role that domestic consumption plays in the pace of economic growth in India, some downshift seems inevitable.

Other aspects which have been impacted

Due to the decline in consumer spending – except for consumer staples, healthcare, and energy sectors – inflation is also expected to slow down.

Food prices have fallen as well. The Consumer Food Price Index has a large impact on the overall CPI (consumer price index) as it forms 47.3% of the overall index. This has had a dampening impact on inflation.

In its latest reading, overall inflation rose by just 3.6% – the lowest in two years as the food index had declined to 2.1%, also a two year low.

Apart from inflation, industrial production activity has been hampered as well.

Indian equities (PIN) have been adversely affected post-demonetization as well with foreign investors taking money out of Indian equities as witnessed by the wide range of projections given by various research desks. However, the move may be beneficial to the Indian economy as well as equities in the long-run as consumers and investors gain confidence in the economy in general and the intention of the government in particular.

Recently, India’s statistics agency came out with estimates for economic growth which has this side of the debate raging again. Let’s look at the details of the agency’s assessment and the related discussion in the next article.