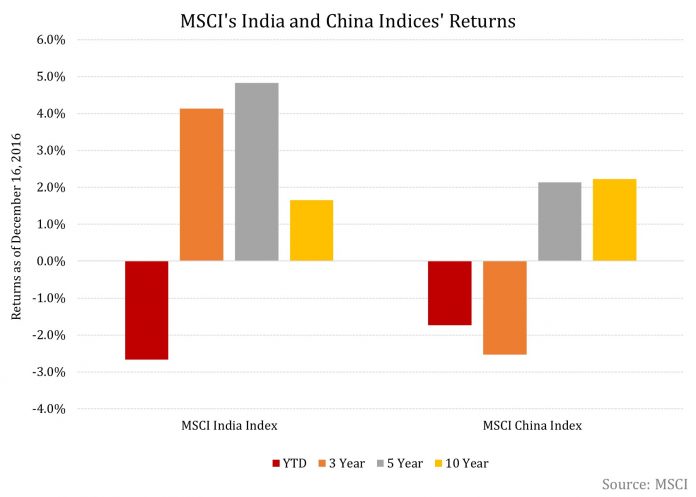 The impact of rate hike on India

If you were to believe the words of India’s Chief Economic Advisor Arvind Subramanian, India’s economy is “very well cushioned” against the negative impacts of a rate hike in the US. As reported by the Hindu Business Line, Subramanian was quoted as saying that “Ever since the US elections, there has been a big flow of funds from emerging markets. Given that we are a bright spot, the impact on us will be much less.”

Indian equities (EPI) (PIN) have fared poorly in 2016, with the MSCI India Index having declined by 2.7% in YTD 2016 until December 16. The recently announced demonetization is expected to negative impact the economy and equities. However, a position of relative macroeconomic strength among BRIC nations placed India in a better position to absorb future rate hikes compared to its peers.

Companies from the information technology sector (INFY) (WIT) can be positively impacted due to the stronger US dollar as it means more revenue for them in rupee terms.

The impact of rate hike on China

Alike Brazil, China (FXI) can be expected to be impacted negatively from the rate hike in the US, though the reasons are different. Unlike their Brazilian counterparts, Chinese equities (MCHI) have not had a good 2016. For a nation whose economy continues to slow down, even this expected rate hike of 25 basis points can result into capital outflows.

The depreciation in the Chinese yuan would increase the debt burden of Chinese companies, several of which are already reeling under the pressure of capital control put in place in order to check outflows from the country. With Donald Trump continuing to be overly critical of the Asian dragon’s trade policies, a rate hike just adds to a list of growing woes.