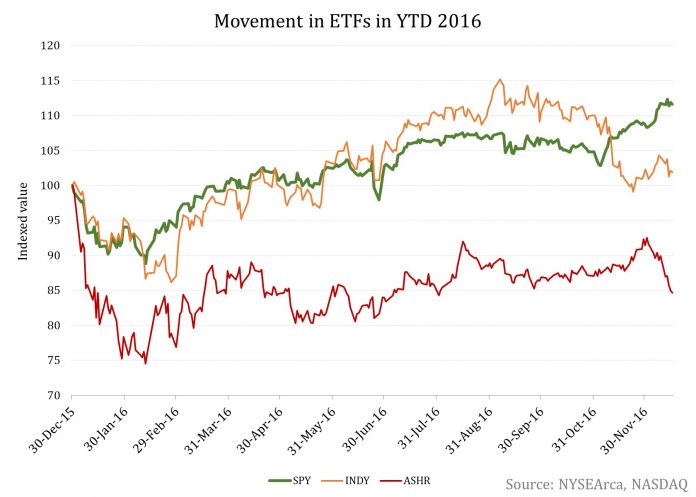 Developed Markets have done better in 2016

Ian Hui, Global Market Strategist at JP Morgan Asset Management, is of the opinion that emerging markets would not feel the pinch of rising interest rates in the US to the same degree as in the past. On the other hand, they may not be as benefitted by improvement in developed markets as in the past either. We had seen this argument in detail in the previous article of this series. Hui was interviewed on CNBC-TV18 by Latha Venkatesh, Sonia Shenoy, and Anuj Singhal.

Anuj drew his attention to the sharp difference between the performance of developed and emerging markets in 2016. As of the date of interview, Anuj informed that the Dow Jones industrial Average (DIA) is up 14%, Indian equities (INDY) are flat, while Chinese equities (ASHR) are down 12%. For the graph below, we have replaced DIA with SPDR S&P 500 ETF (SPY) to remain consistent with broad-based equity indices of respective countries.

The graph corroborates Anuj’s observation: the SPY has posted double-digit gains in YTD 2016, the INDY has been nearly unchanged from a year ago, while the ASHR has fallen in double-digits.

Not all dull for emerging markets

However, Hui continued to believe that it’s not all bad news for emerging market equities (VWO). He observed that commodity markets are improving, which is good news for commodity exporters like Brazil. Similarly, oil prices have improved as well, benefitting countries like Russia. Further, China seems to be stabilizing as well.