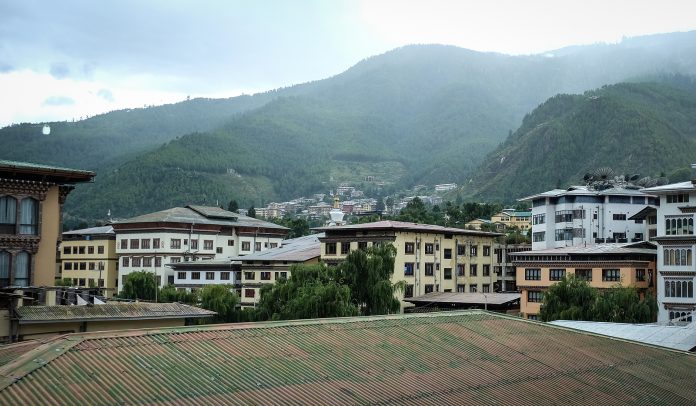 As China and India continue to face off over a tiny patch of Himalayan highland, Bhutan is caught in the middle with the dispute as much about Bhutan’s foreign policy as it is about territory.

Beijing and New Delhi have been facing off over the 34 square kilometres that constitute the Doklam (called Donglang in China) region close to the tiny Himalayan kingdom of Bhutan. China and India have a difficult legacy of border disputes and the standoff over Doklam adds another to this list. Interestingly, the two chief actors in this saga are Bhutan and China, not India. Indeed, India has not expressed a claim on the region, but rather has acted on behalf of Bhutan (according to New Delhi) and intervened in protest to what it considers Chinese expansionism. Conversely, China claims that Bhutan informed Beijing that it did not know about Indian troop movements in the region, nor had it asked India into intervene on its behalf.

Status of Doklam a historical oversight

The spark for this entire confrontation was the entry of Chinese road workers and troops into the Doklam region on June 16th, which is claimed by both Bhutan and China. India saw these movements as a threat to both Bhutanese sovereignty and Indian security interests, sending military forces across the border to occupy the region in response. With regards to security, India is concerned about an increased Chinese presence in, and access to, the Doklam region, as it is near the strategically vulnerable Siliguri Corridor connecting India’s northeastern regions with the rest of the country. A Chinese military advance of some 130 kilometres would cut off the north east of India (and some 50 million people) from the rest of the country: such an eventuality took place during the 1962 Sino-Indian War.

Along with allegations that India is demolishing the aforementioned road, Beijing was angered by Indian military forces crossing an established border (namely the Indian-Chinese border) to intervene in the affairs of a third country. In response, India claims that China’s road building efforts on contested land are illegal. It has since emerged that the road in question has been there for over a decade, and that China was likely widening it. India’s involvement is also predicated on one interpretation of 1890 Convention of Calcutta which delineated the border between British Raj and Qing dynasty China in Sikkim and Tibet. According to Article 1 of the Convention, the border begins at Mount Gipmochi, with the same article going on to state that the border will follow the watershed. The problem is that Mt. Gipmochi does not lie on the watershed. Accordingly, the border ought to start six kilometres north of said mountain at Batang La. This was reinforced by a British map from between 1907-1913 that showed the border starting at Batang La.

What this all means is that “if Mt.Gipmochi is the starting point, Doklam is in China, but if Batang La is the real starting point, then Doklam is in Bhutan and China has no right to build a road there.” Unsurprisingly, China and India cite the two opposing interpretationsas justifications for their actions. Nevertheless, even if India’s preferred interpretation is the correct one, this does not sanction its intervention into Bhutan’s affairs.

What is interesting is that both India and China are clinging to a treaty signed by two defunct predecessor states (British India and imperial China). It also interesting to note China’s adherence to a treaty signed during the country’s ‘Century of Humiliation’ – a perennial sore spot for China’s politicians and public. Intriguingly, on June 30th, the same day that China emphasized the 1890 treaty it also stated that the 1984 Hong Kong treaty signed with the UK regarding the territory’s fate out to 2047 was a “historical document that no longer has any realistic meaning.”

The problem facing both India and China is that the longer the standoff persists the less appealing any unilateral draw down becomes for either side. Chinese rhetoric is ratcheting up in the run-up to the 19th National Congress of the Chinese Communist Party, scheduled for this fall. This uptick in rhetoric before a major gathering is a familiar trend, but it does mean that the issue is likely to remain unsolved until after the Congress, when Xi Jinping no longer needs to rally party cadres to action.

Indeed, this is one of the plans tendered by India: wait out the fall and winter, as weather concerns will limit any activity in the region, and seek a quick diplomatic solution in 2018. Another option is to replace Indian troops in the area with Bhutanese ones, de-escalating the standoff that way and drawing down troops levels. This provides China with a face-saving measure, as it would have stood its ground against India, while working with non-threatening Bhutan to resolve the issue according to China’s own ‘Good Neighbour’ framework.

Interestingly, Bhutan is China’s only neighbour that does not have diplomatic relations with Beijing. Indeed, Bhutan does not have diplomatic relations with any of the UNSC’s P5 members. It is one thing to try and forge a limited diplomatic path free of great power intrigue, but quite another when you happen to be surrounded by them. Bhutan’s close ties to India but minimal, semi-formal ones with China are a legacy of its close orbit around New Delhi, yet one which does not make full use of the potentially productive relationships landlocked Bhutan could cultivate.

Sandwiched between the world’s two largest nations, Bhutan’s efforts to engage China complicate its longstanding ties with India. India has long viewed Bhutan as firmly within its orbit; a veritable protectorate. Having inherited Britain’s paternalist legacy regarding the various Himalayan nations, India maintained a cooperation agreement with Bhutan which saw New Delhi exercise considerable power over the former’s security and foreign policies from 1949 to 2007.

When Bhutan reportedly made unilateral concessions to China in 2005 (then still obliged to consult with India on foreign affairs) India was aghast and scrambled to undo the ‘damage’. Said damage likely entailed China settling for a small concession in Doklam in exchange for larger Bhutanese gains in the north and east. Two years later, India reneged on its role in Bhutan’s affairs, as the country transitioned towards constitutional monarchy. India also expressed great displeasure in 2013 after Bhutan announced its intentions to pursue a “balanced foreign policy” including establishing relations with China; a seemingly commonsense aspiration to outside viewers, but anathema to New Delhi’s interests. The Bhutanese military in its modern incarnation was brought about with substantial Indian support in 1951 following China’s absorption of Tibet. While Bhutan stood by India during the 1962 war, and was one of the first nations to support Bangladesh’s independence, New Delhi’s loss to China and the inconclusive result of the 1965 Indo-Pakistani War called into question India’s pledge to protect Bhutan. Moreover, Indian arguments pointing to China’s annexation of Tibet as a threat to Bhutan were drastically undermined after India’s incorporation of Sikkim in 1975.

Ironically, India has been the largest supporter of and also largest threat to Bhutan’s democracy since the transition from absolute monarchy in the mid 2000s. Alongside the structural problems facing Bhutan from decades of dependence on India, New Delhi continues to meddle in Bhutan’s politics. Specifically, the upcoming 2018 election will see New Delhi rooting for Bhutan’s pro-India prime minister Tshering Tobgay as he seeks re-election. Tshering ousted pro-China Jigme Thinley in 2013, thanks in part to (alleged) Indian support.

Despite being one of the biggest proponents of the country’s transition to democracy, India was quickly accused of back-seat politicking. Specifically, India abruptly cut gas and kerosene subsidies (along with a host of other harsh measures) just days before the 2013 election, throwing Bhutan’s economy in turmoil. Jigme went on to lose the election, and many doubt claims that the cuts were a mere coincidence.

Having been accustomed to decades of overarching influence, India has often neglected relations with Bhutan: a similar failing has estranged Nepal and pushed that country closer to China. India’s “colonial-style approach of buying loyalty through economic aid may no longer work,” notes former Indian ambassador P. Stobden.

60% of Bhutan’s government expenditure is spent on Indian imports, with 75% of all imports stemming from India, as well as 95% of Bhutan’s own exports destined for India. India’s economic shadow looms large over Bhutan, as witnessed by the rupee devaluation, which sent Bhutan’s economy into shock as an unintended (and perhaps overlooked) consequence of New Delhi’s surprise monetary decision.

Bhutan is also facing a growing debt crisis as government borrowing has seen the country’s debt to GDP ratio climb to 118%. Lopsided trade relations (mainly with India) and extensive hydro-power expansion (accounting for 77% of debt to GDP) both highlight India’s ongoing influence. Firstly, “90 to 95% of what Bhutan borrows from India goes back to India,” with Bhutan’s main export – hydro power – chiefly benefitting India. Add to this the fact that India is Bhutan’s largest creditor – responsible for 64% of Bhutan debt – and the situation is clear: India effectively controls both ends of Bhutan’s economic cycle. With a hydro-power potential of some 30,000MW (of which only 5% is developed) and less than a million people, Bhutan stands to greatly benefit from its energy wealth: Bhutan’s projected GDP growth rate for 2017-19 is a staggering 11.1%. Specifically, hydro-power accounted for 32.4% of Bhutan’s exports and 8% of GDP in 2016. With plans to develop 10,000MW by 2020, Bhutan stands to gain from feeding China and India’s energy needs. India’s influence in the country means that it is wary of Bhutan becoming closer to Beijing, and it’s One Belt, One Road (OBOR) framework.

In another ironic twist, India has been whispering to Bhutan for years that OBOR is a debt trap, even as it continues to hold the majority of Bhutan’s debt. Meanwhile Bhutan is viewing OBOR as a means to diversify investment and move away from its reliance on Indian funding. China for its part would be more than willing to supplant India and acquire access to additional renewable energy sources.

In this context, the 24 rounds of border negotiations between Bhutan and China, as well as rumours of closed door territory swaps make India very nervous. Despite not having official diplomatic ties with Beijing, Bhutan has nevertheless made recent overtures to court China and send India a message. Chief among these has been the visit by Bhutan’s ambassador to India to the Chinese embassy to attend the People’s Liberation Army’s (PLA) 90th anniversary. Given the military tensions in Doklam and the fact that it is very rare for an ambassador to attend a foreign country’s armed forces day, this sends a clear signal to New Delhi.