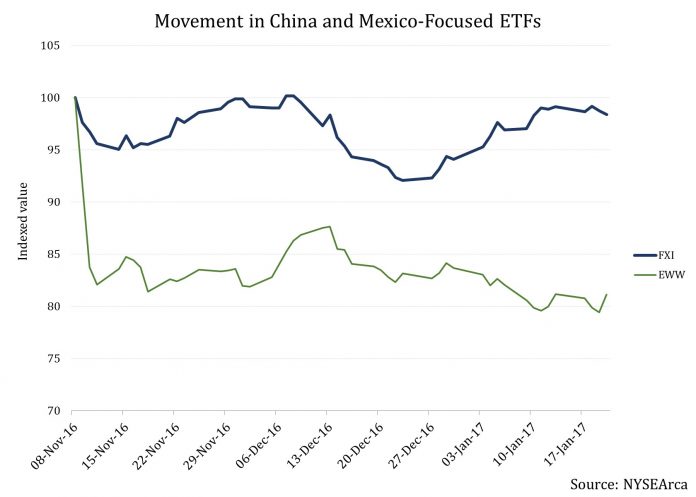 Changes on the way

In addition to the more notable changes in store for the US economy under the new Trump administration such as the potential scrapping of Obamacare and a potential boost for fossil fuel firms, the administration is also expected to have a distinct impact on emerging economies. Below we look at two markets that could face substantial risk given Trump’s campaign rhetoric.

The relationship between Trump and China can be said to be rocky at best. The Asian nation’s control over the yuan-dollar exchange rate and its trade surplus with the US have been targets of attack by Trump.

He has stated that once in office, the Trump administration will label China as a currency manipulator and will take measures to improve the U.S. trade situation with the country.

China has taken steps to look inward for growth in a slow growing global economy. However, it continues to be plagued by capital outflows and high debt levels due to deliberate availability of cheap credit in the nation (FXI).

Apart from China, Mexico (EWW) has been surfacing in the Trump administration’s comments for similar reasons. Trump has expressed his displeasure with the US auto industry importing equipment and vehicles from Mexico. The auto industry has responded by cancelling some of its import business and shifting it to the US, and also announcing various greenfield projects which coincided with Trump’s comments.

80% of Mexico’s exports are shipped to the US and this export dependence could stand to haunt the country in 2017. The Mexican peso is already bearing the brunt of the negative rhetoric.

Further, the government’s decision to hike gasoline prices by up to 20% at the beginning of the year has led to widespread protests which seemingly refuse to die down.

While Brazil looks for revival in 2017, for Mexico, it is all about survival. The country is bracing for the initial storm, and hoping that any type of wall, if built, does not halt its business and trade relationship.

In the final article, let’s look at two other notable emerging countries which will be impacted by Trump.