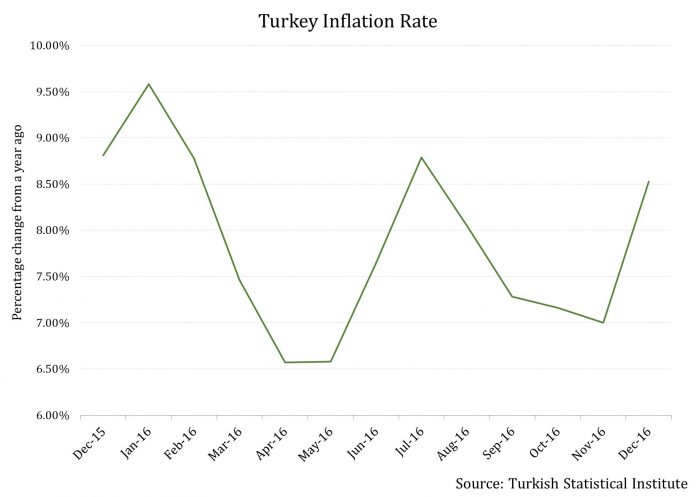 This is post 2 of 4 in the series “Bank Profitability, Exhausted Credit Guarantee Fund and Turkish Bonds and Equities”

Macro-economically speaking, Turkey was in bad shape last year, with economic growth contracting, as shown by the graph below, and inflation also on the rise. Meanwhile, the worsening of public finances had led to the country losing its investment-grade credit rating in 2016.

In order to resuscitate the economy, the government looked to get consumer spending back on track, which led to their encouragement to give out cheap loans. In order to do so, it had introduced tax breaks, like the temporary removal of the 6.7% consumption tax.

Further, even in face of rising inflation, as shown by the graph below, the government wanted the central bank to keep interest rates low so that cheap credit would remain available. Whenever the central bank had raised rates in the past, it had drawn the ire of the government, particularly President Recep Tayyip Erdoğan, who has publicly expressed his dislike for rate hikes due to their negative impact on economic growth.

The push for cheaper credit has had some positive effect on the economy, as shown by gross domestic product growth shooting up in Q1 2017.

In a recent report, J.P. Morgan raised its estimate on Turkey’s economic growth for 2017 from 3.8% to 4.6%, primarily on the back of an even quicker pace of growth in Q2 as compared to the first quarter.

The firm highlighted a sharp bounce back in tourism, rising exports to Europe, the relative stability in the lira, and government decisions to effect tax cuts and the credit guarantee mechanism, as the main reasons for the surge in economic activity.

However, there may be several reasons which may slow down the strong comeback.

J.P. Morgan noted that one of the reasons for the expected slowdown in the economy is that some of the government’s support measures will expire in the second half of the year.

The firm outlined that tax cuts applicable to white goods and furniture – a measure to increase household spending – will end in September. Further, corporations will begin paying social security premiums which were deferred in the first quarter.

This is post 2 of 4 in the series “Bank Profitability, Exhausted Credit Guarantee Fund and Turkish Bonds and Equities”