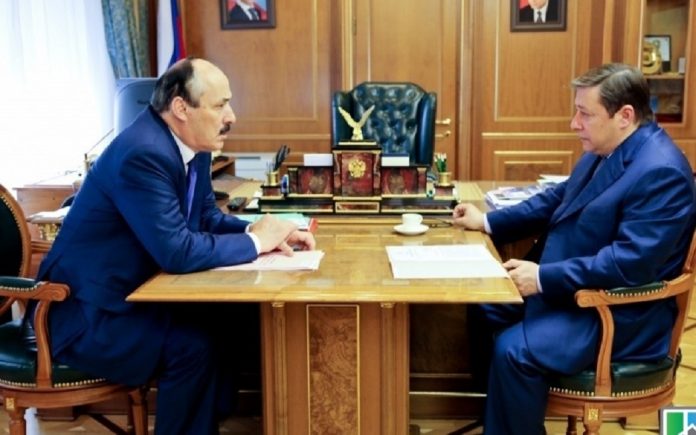 Ramazan Abdulatipov seems ready to close a sale of Dagestan’s state-owned port of Makhachkala to an Iranian-led group. The sale exposes the difficult balancing act elites are playing in the region.

Everybody’s fighting over a spoonful

The port of Makhachkala, the capital of the North Caucasian Republic of Dagestan, is home to Russia’s only ice-free Caspian port. As of 2014, the physical turnover of the port’s transshipments of oil and gas products, bulk cargos, car ferry service, and small grain shipments was optimistically expected to more than double to 15 million tons a year in a few years. This was welcome news to oligarchs interested in the region’s trade flows. Makhachkala’s facilities, Russia’s last state-owned commercial port, have been an ongoing prize for privatization as Makhachkala is Russia’s closest port to Iran and the two countries are set to deepen trade ties. As is normally the case in Russia, privatization is a smokescreen for personal and state-driven motives.

Dagestan is one of the poorest regions in Russia, struggling with endemic corruption, an Islamist insurgency, a large and untaxed shadow economy, and a long legacy of state-mandated economic underdevelopment. The region possesses considerable oil and gas reserves but is stuck paying Gazprom for natural gas from elsewhere, racking up non-payment fines for which Gazprom had the former CEO of local gas firm Dagestanregiongaz Magomedgusen Nasrutdinov imprisoned, and suspended further investment in gas infrastructure in the North Caucasus republics.

Lacking access to oil and gas rents, small-scale initiatives to increase trade contacts with Azerbaijan and Iran have been key to Dagestani leaders’ hunt for trade and growth. The current rush of infrastructure investment into Trans-Eurasian trade routes has opened up a new challenge for the Kremlin as it has long relied on economic isolation to keep Dagestani elites dependent on rents and budgets distributed from Moscow.

Dagestan’s location is vital to the growth of the North-South Transport Corridor between Russia and India as well as Russia’s ability to extract, export, or else transship Caspian oil supplies. Iran is front and center in this unfolding shift as it attempts to seize a greater share of Caspian trade and prevent Azerbaijan from dominating East-West transit of goods through the Caucasus and on towards Europe.

The Kremlin tapped Ramazan Abdulatipov, former representative from Dagestan for United Russia and ambassador to Tajikistan, to replace Magomedsalam Magomedov in early 2013. Abdulatipov vowed to bring counter insurgents, lower unemployment, and restore confidence in government. But Putin’s personal intervention and decision to place Abdulatipov in power was a fundamental political threat to the new acting head of Dagestan, who has since sought to establish his own vertical power networks within Dagestan to insulate him from Moscow’s interference. Putin most likely appointed him to calm infighting between the region’s oligarchs and interest groups. Abdulatipov came to power in the shadow of Makhachkala’s commercial port.

Abdulatipov’s appointment was linked to Dagestani oligarch Suleiman Kerimov, a Dagestani representative on Russia’s Federation Council and billionaire who sought ownership of Makhachkala’s airport and seaport from Abdulatipov’s predecessor. Kerimov, who successfully acquired the airport, has courted Chechnya’s strongman Ramzan Kadyrov as an ally. Kadyrov is seeking means of playing a role in Russia’s Caspian trade to further Chechnya’s contacts, exposure, and linkages with international actors in an ongoing attempt to improve his power base in order to gain more leverage with Putin and the elites in Moscow.

Most recently, he agreed to send battalions of elite Chechen troops loyal to him to Syria in his campaign to model Chechnya as a state within a state exempt from Russia’s governing structures.

Opposing Kerimov and Kadyrov within Dagestan is Ziyavudin Magomedov, the main owner of the investment firm Summa Group. Magomedov has sought buy-ins into logistical infrastructure across Russia and is most famous in the west for his vocal support of Elon Musk’s Hyperloop project. Much of last year’s drama revolved around who sat as the port’s CEO. A Kerimov-friendly appointee was replaced at the behest of Magomedov by his protégé Andrei Gormakh. In a rather pathetic slight, Kerimov denied Gormakh’s plane the right to land in Makhachkala in early June as several hundred armed seaport workers and supporters of both men faced off.

Despite the threat of violence and high tensions, Abdulatipov seems to have thread the needle, as reports surfaced at the end of December that Iran had beaten out interests from China, Azerbaijan, Vietnam, as well as rival oligarchs for potential majority control of the port.

Between Iran and a hard place

Abdulatipov’s choice of suitor is, light of trade interests, Caspian oil politics, and the increasingly untenable status quo of economic underdevelopment, quite telling. China was an unlikely partner and has played an outsized role in funding Azerbaijani projects, most recently approving a $600 million provisional loan for the Trans-Anatolian Pipeline. Vietnam was an intriguing partner: PetroVietnam has partnered with Rosneft for offshore production off its own coast in the South China Sea and Rosneft owns both local energy ‘minors’ Dagneft and Dagneftegaz.

Rosneft is not in a position to exploit Caspian reserves and has lost influence in the North Caucasus, as proven by Putin’s decision to hand Kadyrov land, oil infrastructure, and a refinery project originally promised to Rosneft in late 2015. Now Rosneft has to negotiate with the Republic’s authorities. As a result, PetroVietnam’s offers of up to $300 million for exploration will likely never be actioned.

While geographically ideal, Azerbaijan was an awkward partner due to growing fears that Azerbaijani investment into the Dagestani city Derbent would undermine Russian sovereignty. One-third of the city’s population is Azeri; ethnic Avars and Lezgins in Dagestan resent Azerbaijan’s assimilationist policies, and Azerbaijan’s ongoing expansion of its seaport in Baku would give it too much control over the East-West flow of oil into the Baku-Tbilisi-Ceyhan pipeline or Russia’s infrastructure. In other words, its proximity worked against it.

Iran was the ideal sweet spot. Both rhetorically and functionally, Russia and Iran have done much to lay the groundwork for greater trade over the last six months, signing energy and banking agreements as well as pursuing work on the North-South Transport Corridor. But while Russian Railways has moved to improve rail connectivity between the Caspian port of Astrakhan and Black Sea oil port of Novorossisk, Astrakhan’s port lacks sufficient capacity move bulk cargos, is not a key energy port for Black Sea-oriented pipelines, and has already been ‘privatized’. In the last two years, Iran has begun a Caspian shipping line, aiming to control half of the market for trans-Caspian shipping, making Makhachkala a key strategic acquisition in light of Russian-Iranian economic cooperation.

Whereas oil theft has dogged Russian operator Transneft in Dagestan for years, Kazakhstan in particular has used the port for oil shipments in the past. Iran is increasing its leverage over Central Asian exporters, particularly in the wake of Turkmenistan’s abrupt gas cutoff that will likely put a sizeable dent in any plans to sell natural gas to and through Iran.

Foreign investors are certainly being used by Abdulatipov to prevent any one group of local elites from emerging victorious. A third-party diffuses tension over local power networks losing out between the Avars and Lezgins — represented respectively by Abdulatipov and Magomedov on the one hand and Kerimov and those closest to him on the other. Iran also has civilizational ties to Dagestan as well as a sizeable Azeri community, which extends Tehran’s commercial and cultural soft power northwards into Southern Russia due to the region’s continued cultural and trade linkages.

However, the companies involved must be scrutinized. For now, there’s no public mention of which Iranian firms are bidding on the port but if the Islamic Republic of Iran Shipping Lines (IRISL Group) comes out ahead, it will be huge news. The state-owned company was sanctioned for its role in the Iranian nuclear and ballistics programs and has state links to the Iranian Revolutionary Guards (IRG). It may well prove true that elites in Dagestan and Chechnya have willing partners, as the IRG plays a leading role in Iran’s smuggling sector. Illicit flows of drugs, stolen oil, stolen goods, and sex slaves all feed into the IRG’s coffers, which may expand into Dagestan through front companies and partnerships with locals through the port.

It remains a long shot that Lukoil — Russia’s leading firm in Iran and the Caspian — will develop offshore oil and gas in Dagestan. Azerbaijan’s SOCAR can siphon off oil and gas by horizontally drilling, the region’s political gamesmanship would take a heavy toll on Lukoil’s goodwill, and it would likely elicit a negative counter-response from Rosneft. Without energy rents, Dagestan’s elites will be tethered to agriculture, bringing in Iranian investment, and divvying up new and potentially illicit sources of rents if they want to alleviate the region’s economic struggles.

With Iran winning the port, Kadyrov will have to change tactics to access the Caspian or pressure Moscow, such as engineering ever-greater pipeline thefts to deter Transneft from being able to transit any oil through Makhachkala. Unfortunately for Abdulatipov, third parties bring their own interests to the table; as a result he has likely been stuck with the least bad option available.

As kleptocratic and autocratic networks in Dagestan adjust to an increased Iranian presence, expect greater volatility in oil transit and intra-elite competition. No one will be happy to see a state-asset fall into foreign hands. Iran will soon gain influence over the direction of 5 to 7 million tons of oil exports, a port that allows Iran to ship Central Asian goods through Russia instead of the South Caucasus, access to an economically vulnerable region that needs foreign patronage, and a more pronounced role in the North Caucasus at large that may prove to have security implications given Russian-Iranian cooperation in the Middle East. Moscow and Tehran’s economic futures are increasingly woven together but pressure points like Dagestan may become flashpoints for competition as Moscow continues its eternal struggle with Caucasian elites for authority over the troubled region.