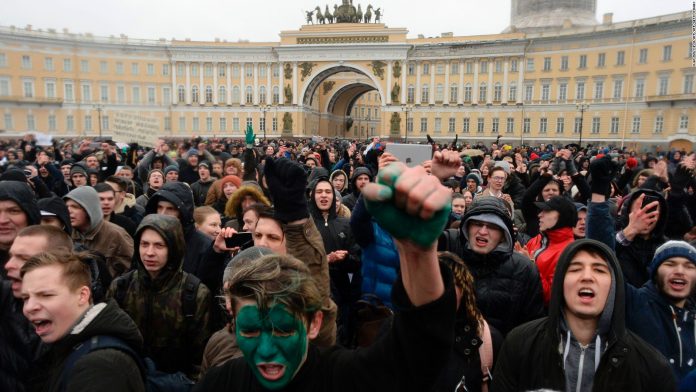 Russia is quietly staring into a future defined by political upheaval. The recent national protests, on June 13th and March 30th, are the harbinger of a very real challenge for the Russian government.

Across the country, Russians are becoming increasingly disillusioned with the endemic government corruption that permeates all levels of the Russian state. When combined with the ongoing recession, more Russians are willing to seek a new way.

Not since the failed Snow Revolution has Russia seen this level of organised protest and mobilisation occurring across the nation. While these protests may have been initiated by Alexei Navalny’s Anti-Corruption Federation, the fire was already ablaze within a significant segment of Russia’s population.

An old problem with no new answers

The brewing tension and antagonism has been on the Russian government’s radar since 2008, when Vladimir Putin’s acolyte, Dimtri Mevedev, promised to deal with the problem during his term as President. At the time, government officials claimed that corruption was appropriating an estimated one third of the government’s annual budget.

Yet the creation of an inter-governmental task force to tackle corruption did little to address the issue. And as of 2011, Vladimir Putin has continued the anti-corruption legislation and rhetoric during his presidential campaign and current term.

The problem is that these measures were too rudimentary. Thanks to the failures of communism in the Soviet Union, the population of the USSR was often forced to create a set of secondary channels through which they could obtain essential goods and services.

These so called ‘blat’ or patronage networks did not fade after the implosion of the USSR. Instead, during the upheaval they became entrenched into every level of the new state apparatus and has a disproportionately sway over the lives of its people, businesses and economy.

For everyday Russians, the impact of corruption can be vast, such as from obtaining a driver’s license to gaining electricity from a local provider or getting basic medical treatment. Bribes are even factored into the retail price of groceries and other goods and services. For example truck drivers often pay bribes of 50,000 ($926) to 70,000 rubles ($1,300) to policemen along their route and as a result, the prices of their goods then rises to cover these hidden payments by the transport firms.

As Lyubov Sobol, a member of the Anti-Corruption Federation investigating Moscow’s corruption, stated, “Everyone who lives in Moscow does not receive the services they are entitled to since a significant percentage (of the budget) gets eaten because the government pays higher prices for goods and services because of corruption and kickbacks.”

It is worse if you are a foreign firm trying to establish yourself in Russia. Ikea for example recently had 9.3 billion rubles in its Russian subsidiary accounts frozen and had to rely on Boris Titov, the Presidential Commissioner for Entrepreneurs’ Rights, to rectify the situation. Since 2007, Ikea has been bogged down in Russian corruption with ongoing litigation thanks to a well-connected generator supplier, Konstantin Ponomarev.

The extensive nature of Russia’s state corruption has disenchanted Russians across the country, thus encouraging the youth to become politically active. Via social media platforms, towns and regions across Russia are now home to mobilised groups who have created civil organisations to rally against state based corruption.

The website Beautiful Petersburg, established in 2015, provides Russians with an outlet to address corruption of local authorities who are not looking after their towns, cities or regions. It has grown to spread throughout Russia and now provides ground support to local groups fighting misappropriation funding and park closures around the country.

This surging opposition to the local and state authorities is not surprising, argues civil rights activist and editor of Russian language magazine The Insider, Roman Dobrokhotov, given how out of touch the Kremlin is with the needs and wants of the young generation. For the so called Putin Generation, the rampant corruption has forced them below the poverty line, while those in power enrich themselves and their families. As one protester stated, “We are against the corruption that is costing the future of our young people.”

No longer trusting the legitimacy of regional and state authorities, this saga of Russian society now wants an answer to this country-wide problem and they are looking directly at Vladimir Putin.

A risk to Putin?

According to a recent survey two thirds of Russians blame the Russian President for the endemic corruption and 79% percent believe corruption has “completely infected” or “significantly infected” Russia’s organs of state power. While many may call for Putin’s removal in the 2018 elections, it is very unlikely.

Putin has had numerous years in power to build his vast patronage network and ubiquitously place his clients throughout the state apparatus. From appointing regional governors to city mayors, Putin has had a hand in most political, military and economic appointments. As a result, his control over the state government is absolute.

Putin’s only real challenger, Navalny, will most likely be precluded from entering the 2018 electoral race due to a controversial embezzlement conviction that excludes him from challenging Mr. Putin. However, Putin should be aware that Mr. Navalny is winning the long game and that if the Kremlin does not address corruption nationwide, then protests will continue to escalate and become a constant thorn in Putin’s side.

As demonstrated in the Arab Spring, a politicized and disenchanted youth, during times of economic hardship, have nothing to lose and everything to gain. Many affected by the corruption appear to still quietly hope that Putin will step up and dismantle the corrupt networks. Given Putin’s need for the patronage apparatus to maintain his hold on power, this is unlikely.

Surviving this loss of legitimacy as the economy continues to weaken will be a tough ask for the President and the Russian state. The way forward for authoritarian leaders is to fall heavily on the use of aggressive and belligerent tactics against the opposition.

Putin’s greatest strength may be his patronage networks but it is also his Achilles heel. In attacking Putin’s cronies, Navalny has brought Putin’s right to rule into question. To maintain his position, Putin will be forced to remove some of his closest allies in an attempt to isolate himself from these charges. To do so in the current system will create large scale instability within the state and Putin will risk losing his network’s support and his position as President.

Dr. Victoria Kelly-Clark is an Analyst at GRI, who focuses on Central Asia and Russia. Article as appears on Global Risk Insights: http://globalriskinsights.com/2017/06/putins-failure-will-navalnys-gain/