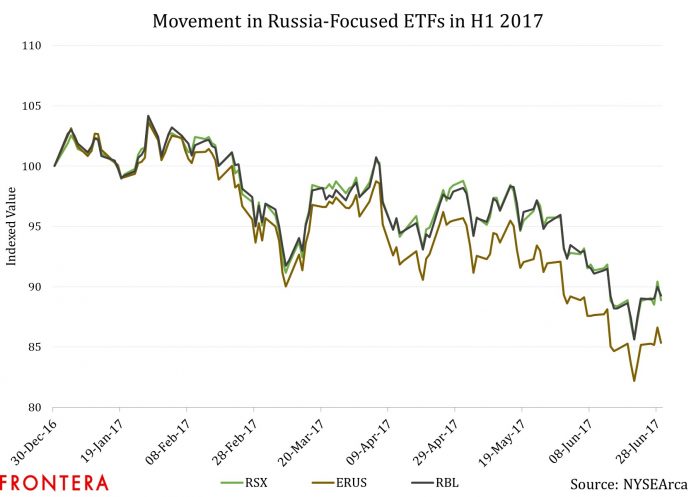 While most of the emerging market universe has been busy taking leaps and bounds upward this year, there are two which have fallen deep into negative territory. The more impacted of the two is Russia.

The MSCI Russia Index has nosedived 15.4% in H1 2017 while the MSCI Russia ADR/GDR Index has fallen 15.5%. Even after strong performances by other emerging Europe markets including Poland (32.8%), Turkey (29%), and Greece (28%), the MSCI EM Europe Index is up by only 2.25% as Russian equities command half of the Index.

The MSCI EM Eastern Europe Index, 63.8% of whose holdings are Russian equities, is down 2.6% for the year due to their poor performance. On the other hand, the ex-Russia version of this Index is up 29% in H1 2017. 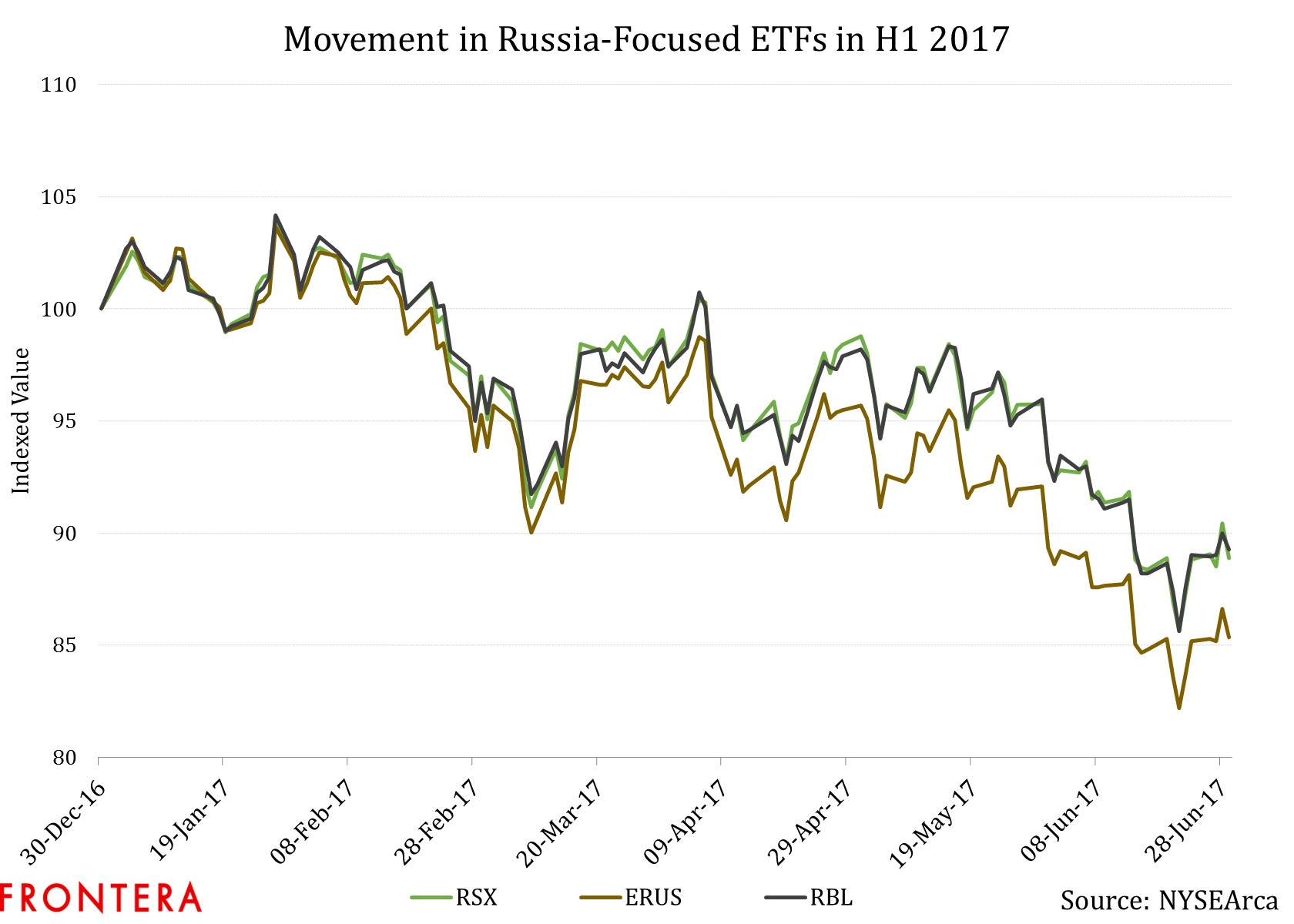 In order to study the performance of Russian equities, we have chosen the following three ETFs investing in them and traded on US exchanges:

Among the three, the ERUS has emerged as the worst performer in H1 2017, down 14.6% for the period. The other two funds have quite similar performance. In fact, for the first half of this year, the daily returns of the two funds have had a correlation of 94.5%.

The energy sector – the key to Russia’s national finances – has been the biggest dampener to Russian equities and instruments investing in them. Apart from that, financials, consumer staples, and telecom services have been other common pain points for these funds. 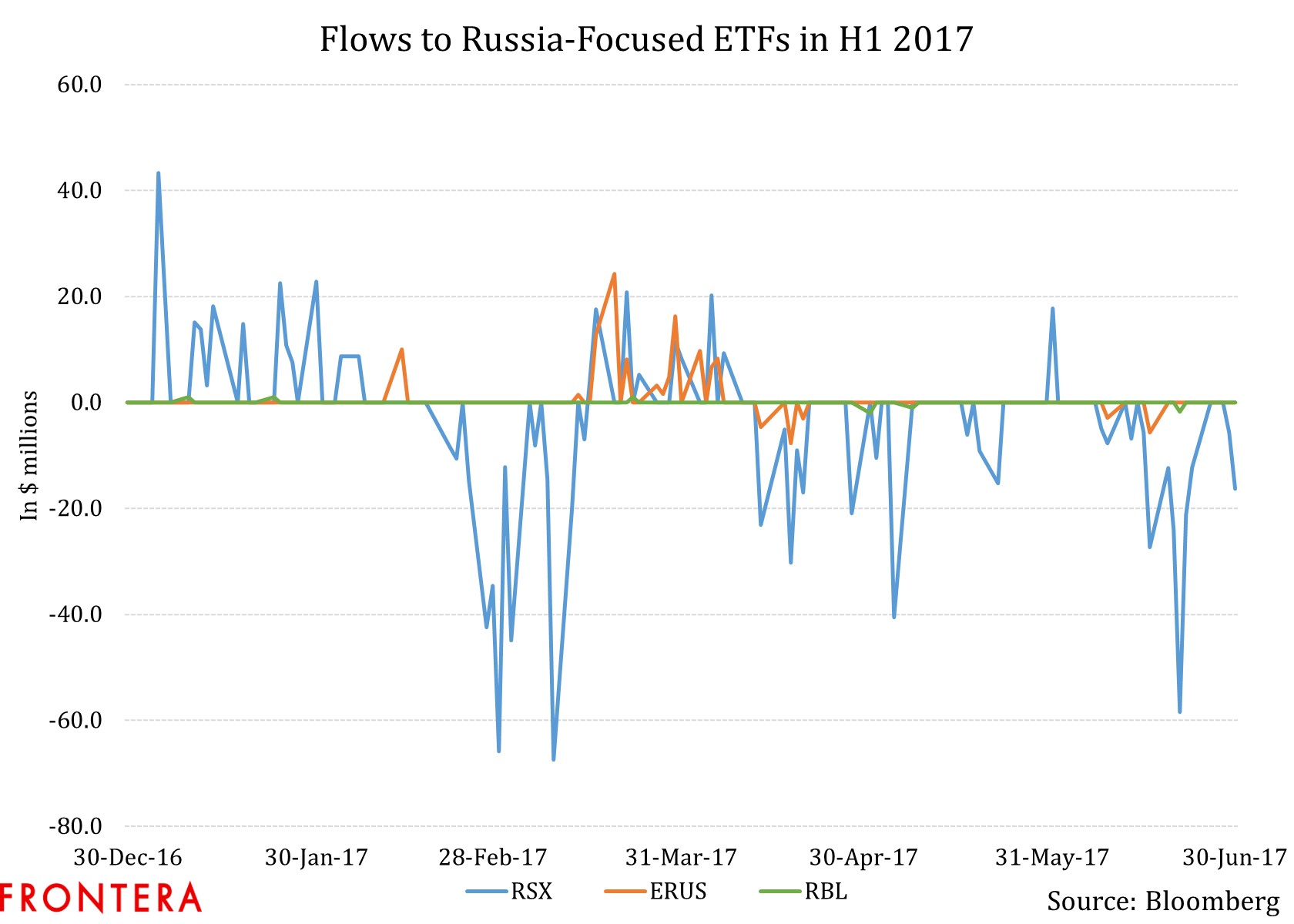 Investors have a number of choices when investing in Russian ETFs. However, a look at the fund flow data shows that timing may not be appropriate given the equity drivers this year.

Russia-focused ETFs have witnessed net outflows to the tune of $370 million in YTD 2017, according to Bloomberg data. The graph above shows the flows to the aforementioned three funds in 2017.

At the beginning of 2017, the RSX – the biggest of the three in terms of asset size – had witnessed strong inflows on hope that crude oil prices will rise as the OPEC-led supply cuts came into effect. However, from late February, the fund started seeing outflows, which, for YTD 2017, stand at $414 million.

The ERUS has been the only fund among the three which has seen inflows this year; they amount to $83 million in the period.

However, given that among the three, the ERUS has the highest exposure to the energy sector, these investors may see further turbulence ahead barring a substantial rebound in crude prices.

At this juncture, those investors who have completely liquidated their positions in Russian equities via these ETFs may be better off waiting on the sidelines for either the political or the energy sector situation to improve before reinstating positions.