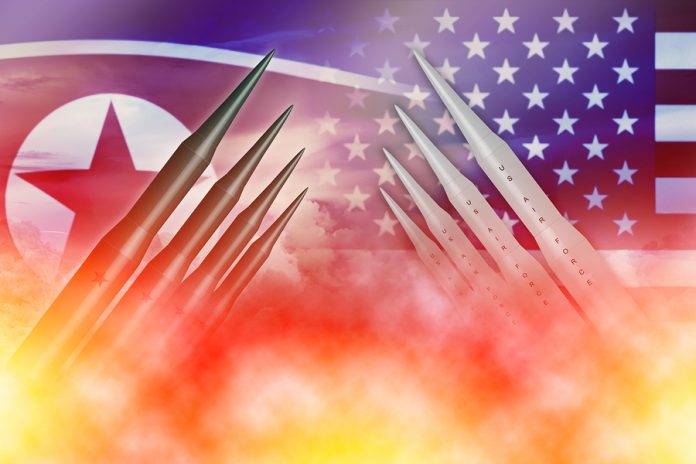 Tensions between the US and North Korea ramped higher last week for the second time this year. The verbal spat saw the rhetoric of flamboyant US President Donald Trump almost match the dazzlingly piquant oratory of his North Korean nemesis, Kim Jong-un. The market is left asking: are we in for genuine “fire and fury” or just another bout of geopolitical flatulence? The answer will determine if this is a time to sell or a buying opportunity.

Our view is that the current posturing of these two fearless leaders will amount to nothing other than a release of geopolitical gas made pungent by the stagnant air in the summer lull. We do not expect a nuclear conflagration to materialise. Repricing of global asset prices is therefore not justified. It is a good time to pick up assets at a discount. If we are wrong, of course, the repricing of global assets will be far greater. In other words, the current pullback offers no real protection anyway.

Why do we think US and North Korea will not go to war? First, a lot of people would suffer, mostly North Koreans. This has not prevented wars in the past, of course, but there would also be Western casualties and potentially many casualties in South Korea. A senior Korean presidential advisor, Moon Chung-in, publicly criticised Donald Trump’s threats over the weekend as “very worrisome”. Besides, appetite in the West for large scale casualties in foreign wars has been declining steadily in recent years on account of the many misadventures in the Middle East. Peaceniks would strongly object and we believe it would be very difficult to get broad political support for the boots on the ground which would be required to effect genuine regime change in North Korea.

Second, Kim Jong-un is notoriously unpredictable. To some he is a comical imp with a funny quiff and an inflated ego, but to others, he is also highly temperamental and quite ruthless. And he has dangerous toys. North Korean society is heavily militarised. He could try to invade South Korea, even seek to explode a dirty bomb in Seoul or maybe strike Japan.

Third, it is important never to forget that the stand-off on the Korean peninsula is a proxy conflict for a much larger and more important head-to-head between the US and China over influence in north-east Asia. While Kim Jong-un would run a big risk if he unilaterally launched an attack on, say, Guam or South Korea, since China has stated clearly that it will remain neutral if Kim Jong-un is the aggressor, a US first strike would be a different matter altogether. If the US draws first blood it could force China’s hand. Kim Jong-un would respond by launching, say, an attack on South Korea and China would enter on the side of North Korea in order to prevent a massive realignment of the balance of power on the Korean Peninsula. In short, the US could find itself in a direct confrontation with China.

Still, Trump’s motivation for getting hot under the collar over North Korea may ultimately be domestically motivated. The US President is not doing very well in the polls and he recently suffered a stinging defeat over the non-repeal of Obamacare. The weekend’s events in Charlotteville have not boosted his popularity. He will be aware that his approval ratings picked up, albeit briefly, after he MOABed Afghanistan and missiled Syria. Hence, the hawkish rhetoric against North Korea.

However, the truth is that this conflict can easily be de-escalated. All it takes is an almost imperceptible concession on one side or the other. This may already be taking place. Secretary of State Rex Tillerson stepped in last week to try to calm the waters. We also believe that China’s statement about remaining neutral in the event of a North Korean-led strike is an invitation to de-escalate. We therefore like the Trump-Kim Jong-un dip. Ultimately, we believe the two fearless leaders in this conflict will not follow through.