China-Pakistan Economic Corridor “CPEC” would be a major game changer

Frontera recently interviewed Thomas Hugger, chief executive officer and founder of Hong Kong-based Asia Frontier Capital (AFC). The firm currently has $50 million worth of assets under management, with about 60% of it ($30 million) invested in its AFC Vietnam Fund. AFC’s funds are typically heavy on the consumer and consumer related industries as Hugger reasons that these sectors tend to benefit the most when an economy grows and are safer when an economy slows. 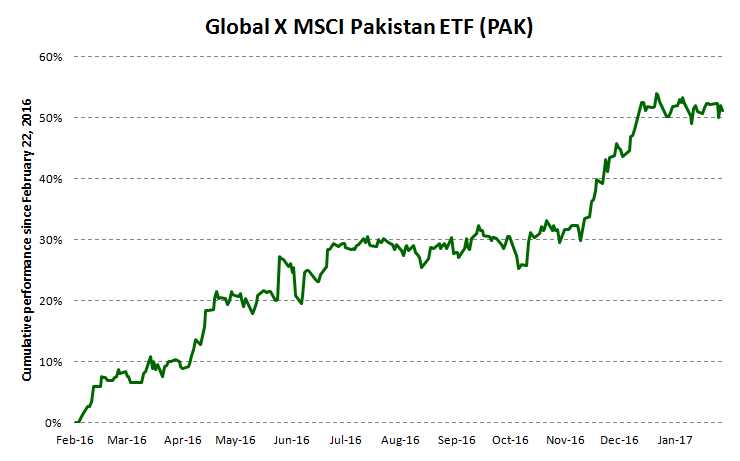 Asked which emerging (EEM) (VWO) or frontier (FRN) (FM) markets hold the biggest promise for 2017, Hugger told Frontera, “in terms of returns, we’re very positive on Pakistan.” Hugger believes that the China (FXI)-Pakistan economic corridor (CPEC) would be a major game changer for the country. This should, in effect, translate to higher returns at the Pakistani stock market (PAK).  The Pakistani equity tracking KSE 100 Index has returned 57.46% over the past year (as of February 16). The index trades at a relatively cheap P/E ratio of around 12.8.

Read, Five Projects That Will Define the Success of the China-Pakistan Economic Corridor for more insight into the topic.

What sectors should investors focus on within Pakistan?

Within Pakistan, “we like the consumer and consumer-related sector,” Hugger told Frontera. Hugger stated that he also likes pharmaceuticals and the infrastructure, including everything that benefits from infrastructure. Cement and construction companies typically benefit whenever infrastructure spending in an economy rises.

ICI Pakistan Ltd. which is into polyester and pharmaceuticals, among other businesses, is up 137% over the past 6 months. Footwear and tires & tubes manufacturer, Service Industries Ltd, had gained 74% over the 6 months ending Feb 6, 2017, while Philip Morris Pakistan Ltd was up 69%.

Hugger also expects the automobile sector in Pakistan to perform well in 2017. Automobile companies in Pakistan such as Honda Atlas Cars Pakistan Ltd and Millat Tractors Ltd have done very well over the past 6 months with returns over 100%.

Among infrastructure plays, International Steels Ltd. and SUI Northern Gas Pipeline have been notable performers over the past six months.

In which markets is AFC currently cautious towards?

AFC isn’t fond of bank stocks in most frontier and the emerging markets, as they believe that most are not exceptionally well managed. With banks it is always the “boom or bust” situation, Hugger told Frontera. Overall, markets that AFC is cautious on right now include Laos, Papua New Guinea and Sri Lanka.