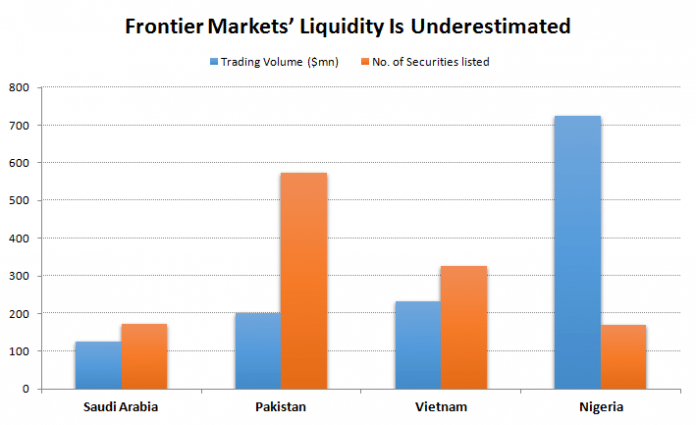 This is post 7 of 7 in the series “Franklin Templeton Is Re-Opening Its Frontier Markets Fund, Lured By Immense Undervaluation”

Another interesting point that Carlos Hardenberg, director of frontier markets at Franklin Templeton Emerging Markets Group, made during his recent interview with Citywire Selector was concerning liquidity in frontier markets. These markets, often considered in isolation, seem illiquid compared to their emerging market (EEM) (VWO) peers. However, “if you truly have a global approach and you include all of the frontier markets in your universe, they would look much better than what many people actually think,” said Hardenberg. Currently, daily turnover for the frontier (FRN) (FM) space is $2.2 billion, and the asset class boasts a market cap of $1.6 trillion, noted Hardenberg. 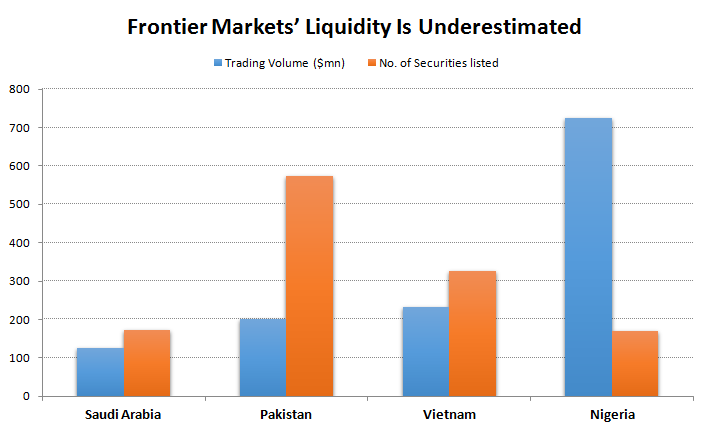 Within the frontier space, markets such as Saudi Arabia (KSA), Pakistan (PAK), Vietnam (VNM), and Nigeria (NGE) offer substantial liquidity (as charted above).

Pakistan is another (former) frontier market with decent liquidity. The economy’s capital market also has compelling valuations with room for investment. The economy was recently upgraded to emerging market status by the MSCI.

This is post 7 of 7 in the series “Franklin Templeton Is Re-Opening Its Frontier Markets Fund, Lured By Immense Undervaluation”