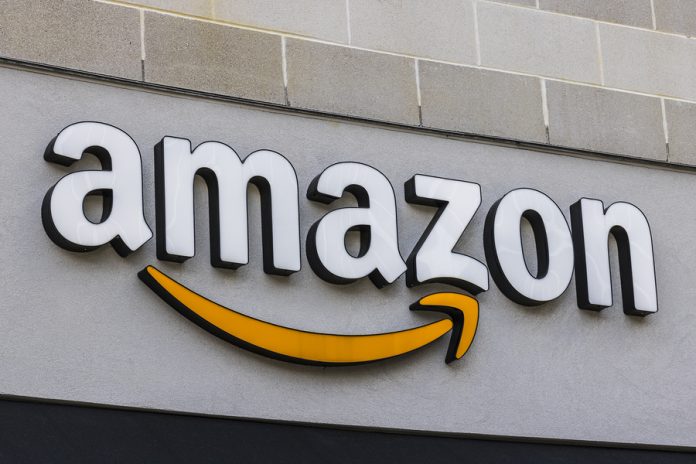 Global e-commerce retailer Amazon (AMZN) is buying a 5% stake in India (INDA)(NSEI) listed retailer Shoppers Stop, as part of a broader effort to establish a lasting foothold in the country. Shoppers Stop will issue 4.4 million shares to Amazon for 407.78 rupees each, equating to a deal value of approximately $27 million. As part of the agreement, Amazon experience centres will be set up at each of Shoppers Stop’s 80 stores across the country. Shoppers Stop, which sells cosmetics, clothing and home appliances at its outlets, will have an exclusive flagship store on Amazon India’s site where it will retail its entire 400 brand portfolio. This deal would aid Shoppers Stop to boost revenues and add 25% stores to its existing network. 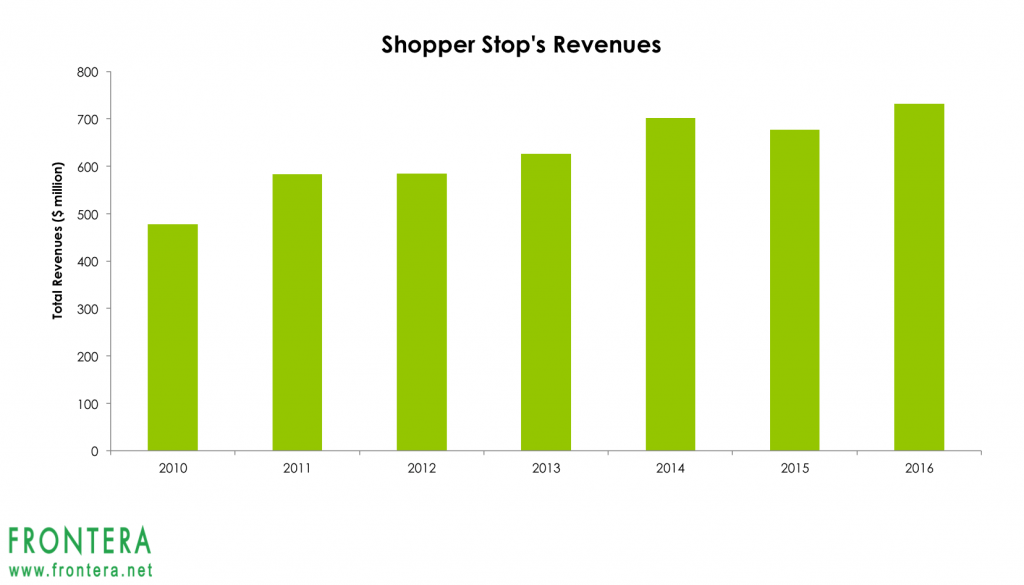 This move is Amazon’s first investment in a publicly traded retailer in India and follows Jeff Bezos’ announcement of a $5 billion investment in India. The major allocation to India was earmarked as Amazon seeks to gain an edge over local rivals in the fast growing consumer market. This deal would provide Amazon strategic access to smaller second and third-tier cities in India where Shoppers Stop already has an established store network. Amazon is said to be playing it safe in India, after getting washed out from China (MCHI)(FXI) by Alibaba (BABA) and other local players. 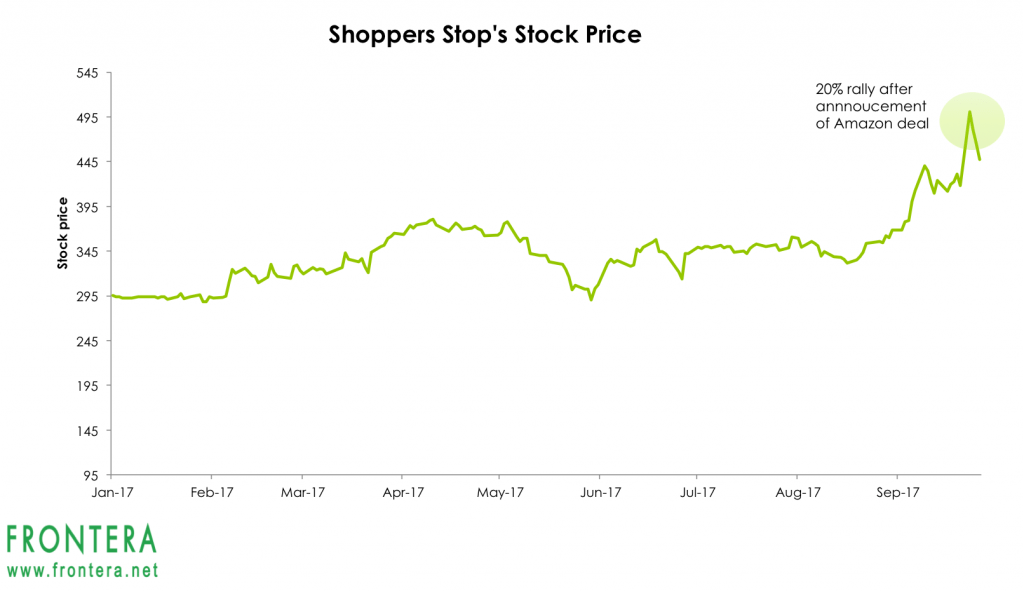 Shares of Shoppers Stop surged nearly 20% after the deal was made public, its highest intraday gain since 2009. Shares of the retailer have gained 55% this year, outperforming broad-based benchmark indices. Comparatively, Amazon’s shares are up 27% in 2017 to date. 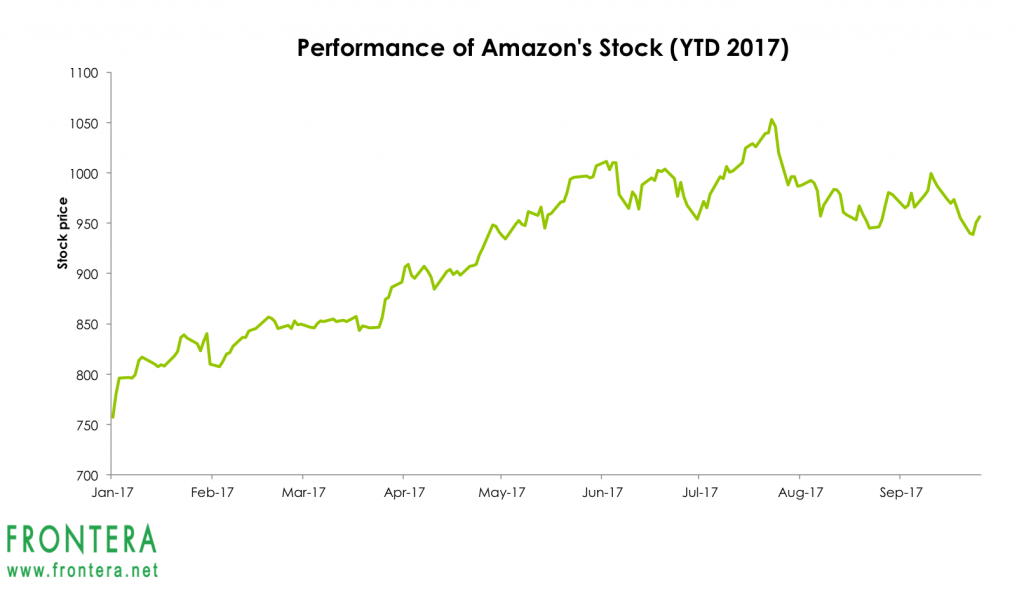 Deepening Internet penetration and widespread adoption of smartphones has brought exponential growth to e-commerce retail in BRICS countries. BRICS nations provide online retailers a huge opportunity for inorganic growth through strategic acquisitions. Alibaba research estimates online shoppers in these countries to grow to 1.35 billion by 2022, which would then constitute 61% of global online shoppers. In 2016, BRICS nations accounted for 47% of global online retail sales, a number which is expected to grow to 59% by 2022.

BRICS economies boast of many large retailers that could become strategic acquisition targets for Amazon and other global e-commerce giants. In Indonesia, one of the most populous countries in the world, e-commerce is largely dominated by Alibaba-owned Lazada. This may result in Amazon focusing on other ASEAN countries at first to gain regional market share. 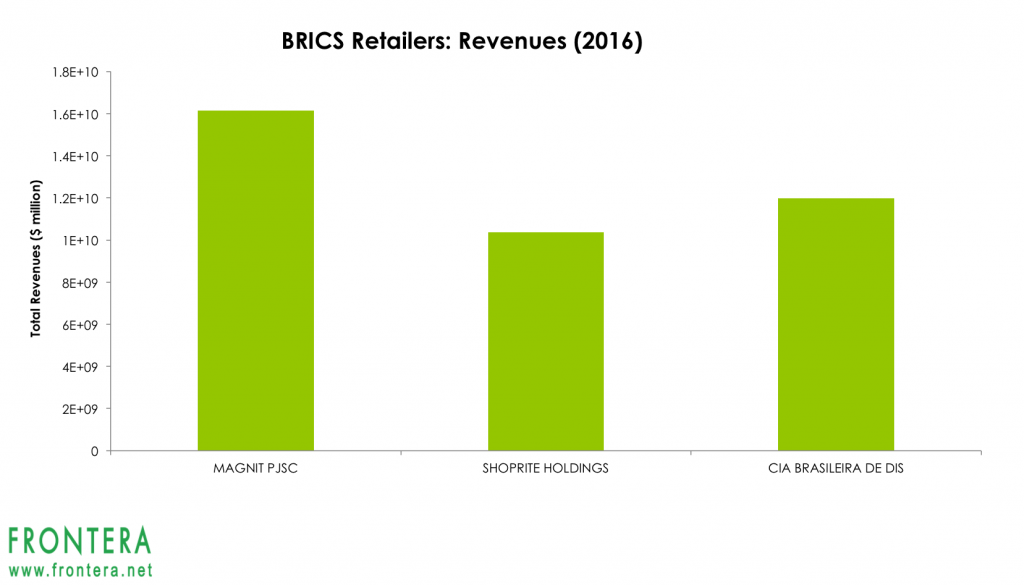 Magnit is Russia’s largest retailer with 14,059 stores as of December 2016, which includes 10, 521 convenience stores, 237 hypermarkets, 194 “Magnit Family” stores and 3,107 “Magnit” Cosmetic stores. Magnit operates in 2,495 locations in Russia and is among the world’s largest retailers by market capitalization. The company has market cap of $16 billion, comparable to market cap of large retailers like Carrefour and Kroger.

Shares of the company are publicly listed on the London and Russian Stock Exchanges with tickers MGNT.IL and MGNT.ME respectively. The company’s Russia listed shares have declined 8% in value in 2017 so far. 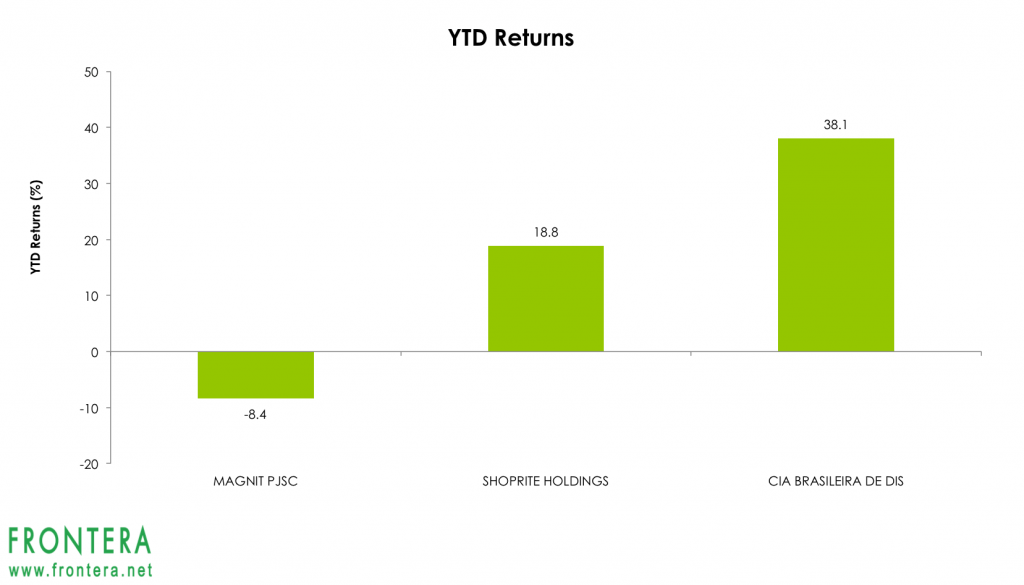 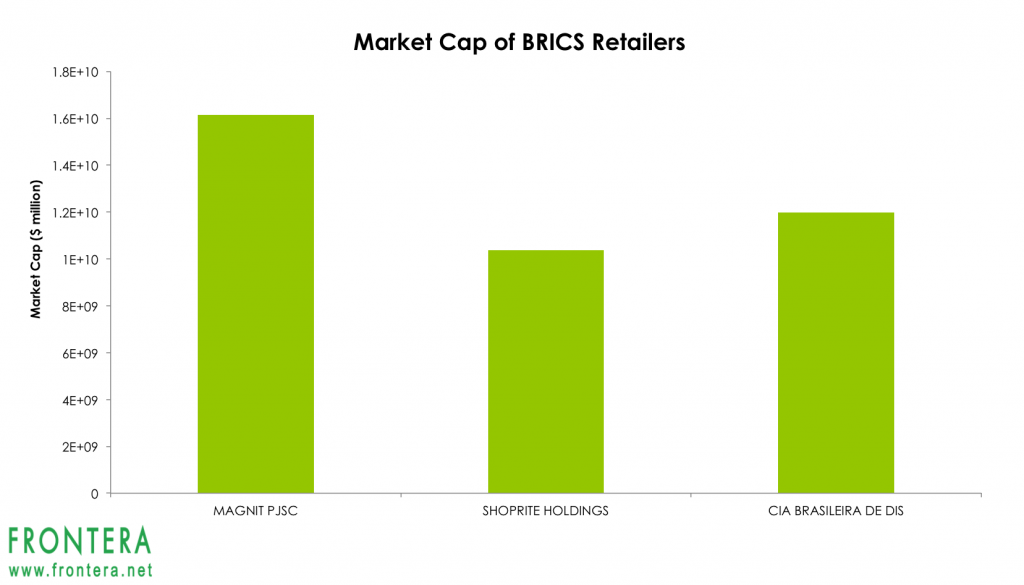 In 2016, the company reported revenues of $10.4 billion. Currently, it has a market cap of $8.9 billion, and is among the largest stocks on the Johannesburg Stock Exchange. The company also has secondary listings on the Stuttgart (HY7.SG) and Frankfurt Stock Exchanges (HY7.F) and OTC Markets (SRGHY). The company’s Johannesburg listed shares have gained 18.8% in value to date in 2017.

It is currently the largest Latin American retailer by revenue and the second largest online-retailer in Brazil. In 2016, the company generated revenues of $11.9 billion and operating margins of 4.4%. The company operates its e-commerce portal through Cnova Brasil. Grupo Exito, Brazil’s largest food retailer, owned 18.7% of the company while French retailer Grupo Casino owned 22.8%.

Currently, the company has a market cap of $6.3 billion. It has secondary listings on the New York Stock Exchange with ticker CBD. The company’s Johannesburg listed shares (PCAR4.SA) have gained 38% in value to date in 2017.