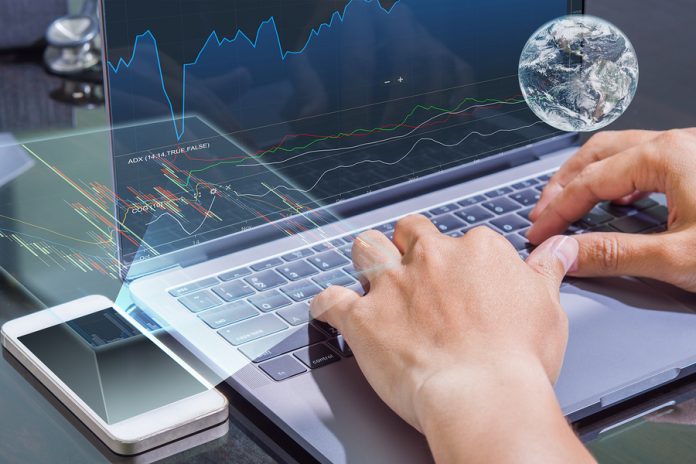 This is post 4 of 5 in the series “Emerging Market Bond ETFs: Worriers over Credit Quality Outweighing Strong Performance?”

Emerging market bonds have provided healthy returns this year as we have seen in previous articles of this series. However, apart from questions on the longevity of the rally, market participants have started worrying about the elevated risks that come along with investing in these securities and the instruments tracking them.

We’ll look at these concerns from the perspective of an investor in exchange-traded funds offering exposure to emerging market bonds. Given that most of the investments made by these funds are in sovereign bonds, let’s look at one of the key inputs in assessing the risk associated with bonds issued by a country – credit rating. 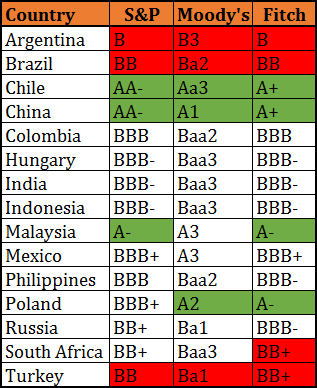 Bonds of the 15 countries appearing in the table above find a place among the top 10 markets invested in by most of the funds tracking the asset class.

A general consensus can be drawn from the table above: the credits of Chile, China, Malaysia, and Poland are among top ranked notes, while those from Argentina, Brazil, and Turkey are highly speculative with impaired repayment ability.

Now let’s take this broad assessment and study it along with the credit quality profile of the following four funds: 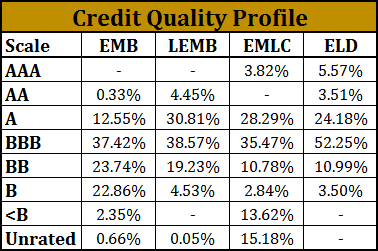 From the table above, purely from a ratings perspective, the ELD looks to be among the safest, while the EMLC seems to be taking the most risk given its relatively high exposure to bonds rated below B (including unrated papers).

Among these funds, the EMB comes out to be quite risky considering that a shade less than half of its assets are invested in papers rated below BBB. Bloomberg noted a change in the credit quality profile of the fund saying, “The proportion of this fund’s holdings rated in the BB tier and below (or unrated) by Moody’s Investors Service has increased to 48.1 percent from 44.7 percent in June 2015.”

As far as country-level rating changes are concerned, an upgrade or downgrade is mostly priced-in to market prices before it takes place. Hence, investors should watch geopolitical and economic developments closely in order to see how it may impact allocations.

For instance, though Argentina remains poorly rated, it had received an upgrade from S&P in April this year. This means that there may be interesting opportunities emerging in the country which may turn quite profitable if the nation continues to improve its finances.

On the other hand, though South Africa remains several notches higher than Argentina, it was recently downgraded to junk category and further untoward developments could hurt its assets even more.

In the next article, we’ll analyze how the various components discussed in this series bode for ETFs.

This is post 4 of 5 in the series “Emerging Market Bond ETFs: Worriers over Credit Quality Outweighing Strong Performance?”