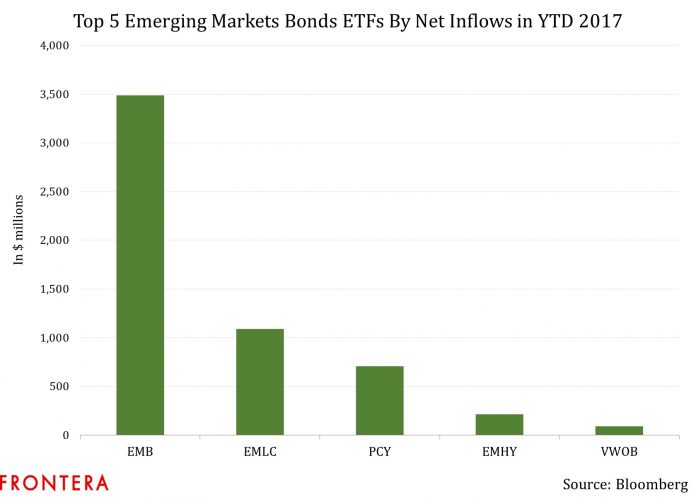 This is post 2 of 4 in the series “Is It Time To Head Back To The Safety Of Developed Market Bonds?”

The iShares J.P. Morgan USD Emerging Markets Bond ETF (EMB) is by far the biggest ETF investing in emerging markets bonds. With $11.6 billion in assets, it towers over its closest peer – the PowerShares Emerging Markets Sovereign Debt Portfolio (PCY) which has $4.6 billion under management.

Due to its popularity, the EMB was the recipient of the highest amount of net inflows among US-listed emerging markets bond ETFs in YTD 2017 as can be seen from the graph below. 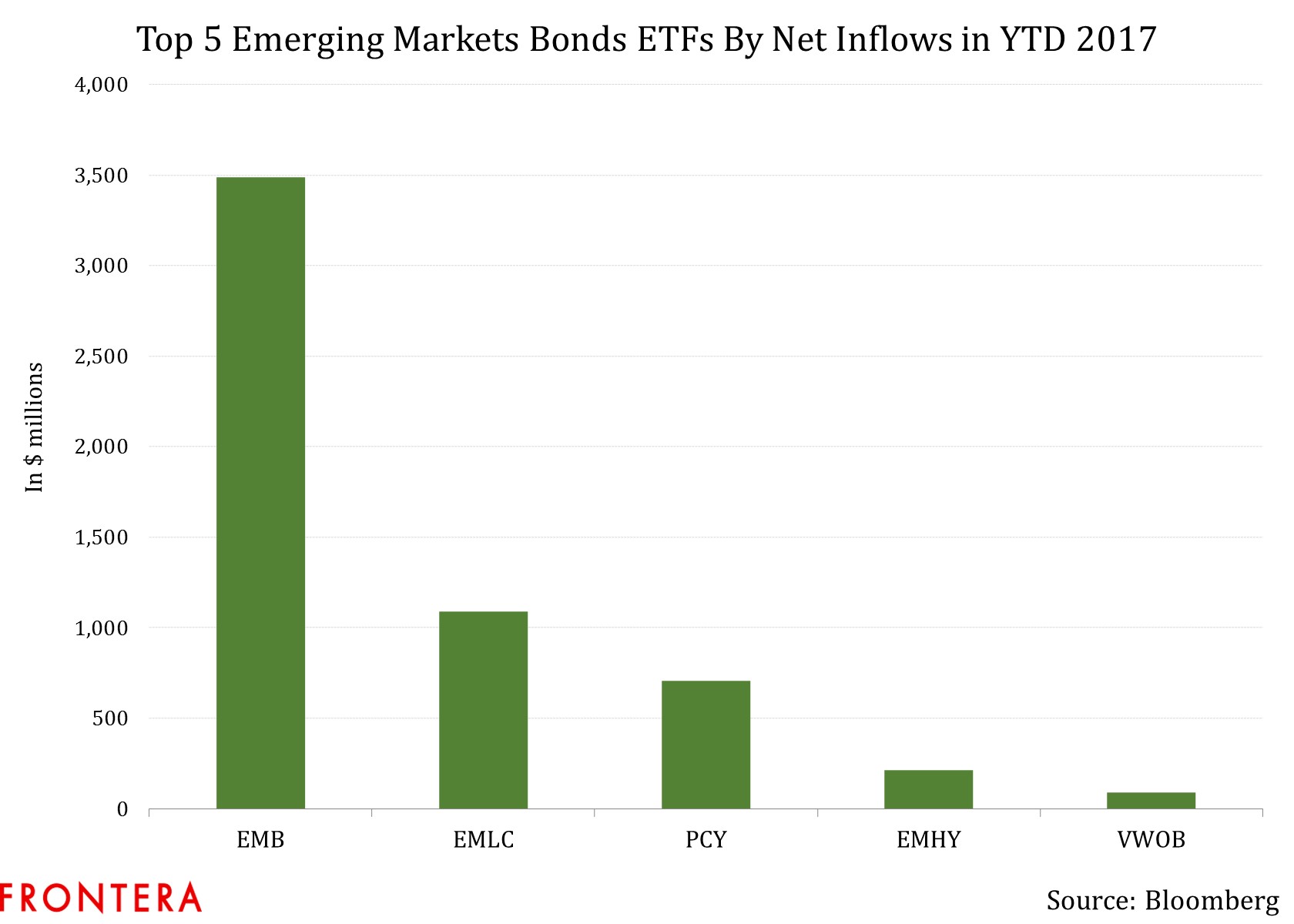 According to Bloomberg data, in the week to July 7, the EMB had an unflattering performance as it saw net outflows worth $826.8 million. This was the biggest weekly outflow in the fund’s history.

To many observers, this was indicative of the asset class losing its preferred status in the investment community. If this is the case, then the EMB bearing the brunt of the selling is understandable given its asset size and trading volume.

But before dismissing the case for emerging market bonds, a closer look is required.

For a market segment that traditionally gives mainstream investors the jitters, US investors have been somewhat experimental in their chase for yield in 2017. This is shown by the high inflows to the EMHY. Though in gross terms, they may be a pittance compared to net inflows seen by the EMB and EMLC, when looking at flows as a percentage of its asset size, the ETF has left all its peers far behind. 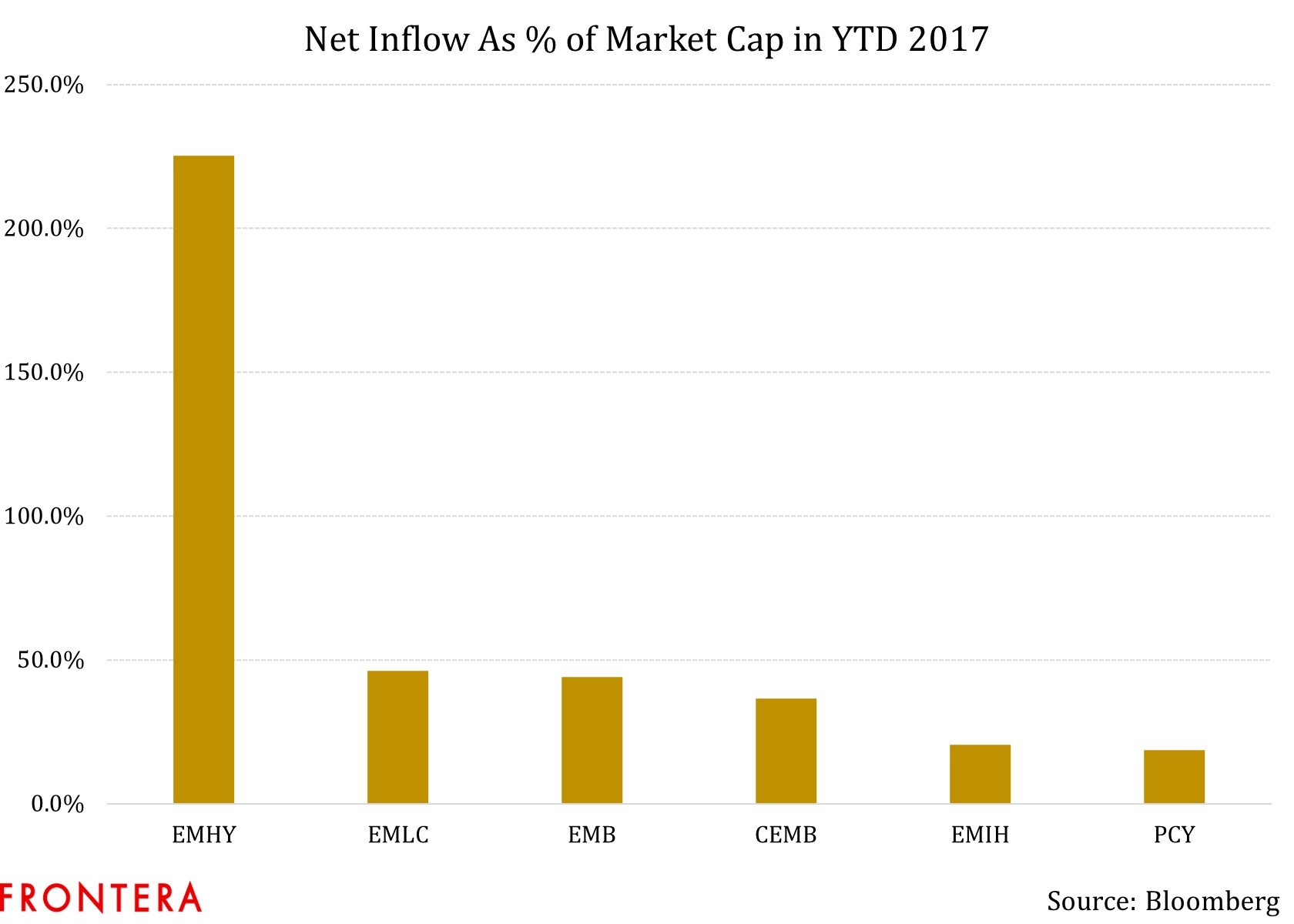 As seen in the graph above, the EMB stands third in this list, well behind the EMHY which has seen inflows of 225% of its asset size.

Until July 11, the EMB has seen month-to-date outflows amounting to $714 million. According to Bloomberg data, the PCY is the only other fund to have witnessed outflows in the period.

On the other hand, EMHY, EMLC, and VWOB have all witnessed net inflows in the period.

This makes for two interesting observations:

The EMB and PCY outflows appear to be more representative of investors simply booking profits with a percentage of their holdings.

This is not to say that there’s not cause for concern though. The run up in emerging markets bond ETFs has been substantial, and completely liquidating holdings from the asset class after making handsome gains over the past year is increasingly appealing.

However, available information is not yet substantial enough to make a final assessment regarding future performance of emerging markets bonds. According to the inflows seen in EMHY, many are going even deeper down the credit quality ladder to find value.

In the next article, we’ll look at the lower emerging markets bond spreads in conjunction with US Treasury yields.

This is post 2 of 4 in the series “Is It Time To Head Back To The Safety Of Developed Market Bonds?”