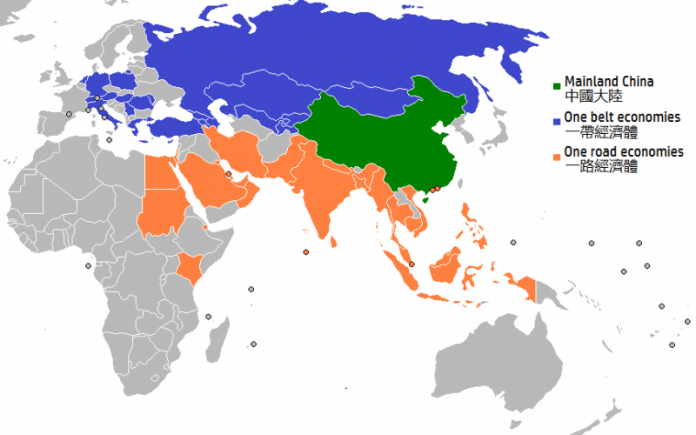 While OBOR has increased Beijing’s presence in Africa, a fiery debate has thrown a spotlight on China’s future role on the continent.

China’s massive presence on the African continent is common knowledge, but what has largely flown under the radar until now is just how dependent Beijing has become on its African partners. In a recent example, OPEC production cuts have led China to increase its imports of African crude oil to never-seen-before levels. In April, Beijing was on the receiving end of 1.48 million barrels a day, shipped largely from Angola and Nigeria.

This growing symbiosis between Sub-Saharan Africa and China brings with it several potentially damaging side effects. Many African countries feel they have to choose sides between either the “Washington” or the “Beijing” consensus on issues of financial aid and development. While Western financing comes with lower interest rates, funds are generally linked to criteria such as “rule of law”, implemented to engineer a certain level of political development in the recipient state. By contrast, Beijing’s financing creates results in a different framework: economic and strategic dependence with little heed paid to human rights or democratic standards.

Now that Beijing’s trillion-dollar One Belt, One Road policy is in full swing, a third group, known as “China accommodators”, is slowly emerging, propelled by the belief that it can create a balance between the two. This is similar to the strategy of hedging favoured by many South East Asian states. It would essentially allow African states to chart their own course without what many governments have come to see as western interference.

The New Partnership for Africa’s Development (NEPAD), an agency of the African Union, is the best example. As Simplice Asongu of the African Governance and Development Institute explains, NEPAD “champion democracy, the rule of law, and human rights; but, like China, they oppose Western interference”. There is a strong argument that imposing democratic conditions as a prerequisite to funding has not worked in Africa, as he points out: “Given that a starving person would most likely give up their vote in exchange for some bread, one can surmise that a certain level of prosperity must be achieved before political rights become the top priority.”

But can this model actually work?

China’s top-down investment style in Africa’s authoritarian states has provided an extremely important source of revenue for governments who continue to neglect the economic needs of their citizens. Much like the way many analysts falsely hoped economic liberalism would lead to liberal democracy in China, the Beijing model in Africa is creating stronger governments, not better policymaking and certainly not wealthier citizens.

Examples abound, but Angola and Djibouti provide excellent case studies for the Chinese model in action. The two are probably Beijing’s most important African partners, albeit for different reasons: one for its oil wealth, the other for its strategic location.

Jose Eduardo dos Santos, the President of Angola since 1979, has managed to weather political scandals, tumbling oil prices and a bloody civil war, thanks largely to China’s help. Using its status as Beijing’s largest African provider of crude, dos Santos secured more than $15 billion from Beijing since 2004 in loans and credit lines, which he subsequently repaid with oil exports. In the process, Angola’s national oil company, Sonangol, grew into a behemoth worth more than $40 billion, whose proceeds were used by the dos Santos family as sources of patronage. Even if dos Santos said he would step down in August after 38 years, the fact that his daughter, Isabel dos Santos, will remain the head of the national oil company means the family’s outsized clout will remain intact.

Speck-sized Djibouti, sitting directly across the water from Yemen in the Horn of Africa, has been benefitting from Chinese largesse that has strengthened the power of the ruling family. According to recent reports, President Ismail Omar Guelleh has asked the Chinese ambassador to foot the hundred-million-dollar bill from a recent legal dispute his government lost in February after falsely accusing a political opponent of taking bribes. In exchange for Beijing’s help, Guelleh agreed to increase China’s shares in the country’s strategically placed port. Djibouti shot to international prominence in recent years after China announced it would open its first foreign military base there, in close proximity to America’s largest African installation – a remarkable sign of China’s great power ambitions and its newly international reach.

“China accommodators” should also remember neither Angola nor Djibouti have experienced much of a trickle-down effect from Chinese investment in their economies. Djibouti’s poverty rate is above 40%, while Angola’s child mortality rate is the worst in the world despite its impressive oil wealth.

The OBOR framework, highly dependent on an interlocking set of countries serving as conduits for Chinese exports, infrastructure projects and investments, is bound to keep attracting additional African partners. While African markets inevitably need China to accelerate growth, the continent is equally indispensable to China’s project of becoming a leading international power.

Therefore, for OBOR to be successful, China needs stability in the countries it invests in, something best achieved by creating a large middle class as opposed to currying favour with unpopular autocratic leaders – a position that is closer to the Washington consensus than to Beijing’s. The question is how China can encourage African governments to deliver economic benefits and grow their middle classes without creating the same type of conditionality that has plagued US funding?

Time will tell how Beijing chooses to resolve this problem. At home, China believes that strong institutions coupled with steady governance and robust security is essential to stability. It is to be seen whether Beijing can push African countries to think similarly.

Nicolas Jenny is an analyst at Stroz Friedberg in Hong Kong. As originally appears: http://globalriskinsights.com/2017/05/chinas-expansion-obor-leaves-africa-caught-dilemma/