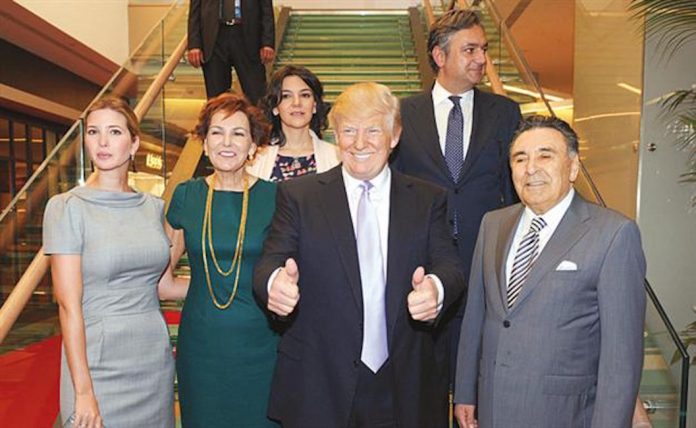 Since 2014, Donald Trump’s company has been paid up to $10 million in licensing fees by a Turkish property developer for the rights to use the Trump name on two conjoined luxury high-rises in downtown Istanbul.

The owner, billionaire Turkish property developer Aydın Doğan, is best known for his company Doğan Holding (DOHOL), one of Turkey’s largest conglomerates. The partnership between Trump and Dogan was originally forged in 2008, with the development being inaugurated in 2012 by the now President of Turkey, Recep Erdogan.

Doğan Holding (DOHOL), hit it’s low point of the year on 1 July at 0.46 Turkish Lira (TRY), which coincidentally was the same day that Trump made an unscripted comment about Turkey during a speech in Denver, Colorado while naming several countries that are militarily defended at the expense of the United States.

The company’s shares have climbed steadily since then, and are up 33% year-to-date. The stock rose as much as 12% when the trading day opened in Istanbul as US election results were being finalized on the morning of 9 November.

In 2009, Doğan Holding was fined $3 billion by the Turkish government on claims of unpaid taxes. The charges were considered by many to be politically motivated with the fine drawing criticism from the European Union and the United States.

An Istanbul prosecutor submitted an indictment in March 2016 accusing the founder of Mr. Dogan of involvement in a fuel-smuggling ring.

As the Republican presidential frontrunner in December 2015, Donald Trump made a public proposal to temporarily bar Muslims from entering the US. Bülent Kural, the manager of Trump shopping mall, located inside the Trump Towers in Istanbul, issued a response shortly thereafter, “our reaction has been directly expressed to the Trump family. We are reviewing the legal dimension of our relation with Trump brand.” However, no further action was taken.

Dogan Holding (DOHOL) has major interests in the media sector, including Hurriyet daily and CNN-Turk channel. However, neither has been closed or seized yet unlike the more than 130 other outlets in Turkey, which were targeted by President Erdogan in the aftermath of July’s failed coup.

The political calamity in July has made for a difficult year, with economic momentum thwarted by government crackdowns following the failed coup as well as the recent strain on political ties with the West.

The Turkish lira is down by roughly 14% against the U.S. dollar this year. The exchange-traded fund iShares MSCI Turkey (ticker: TUR) is down approximately 20% since Turkey’s failed coup attempt earlier this year in July.