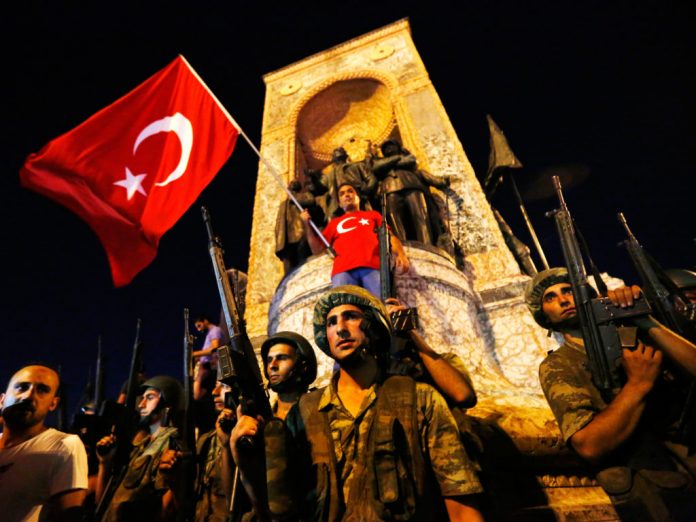 It didn’t take long. Eight months ago, Turks effectively gave a green light for their power-craving president to centralize authority under his command, by re-electing the AK Party with its mandate to overhaul the constitution.

Now, Recep Tayyip Erdogan is crushing all remaining dissent, with last Friday’s coup attempt the premise for thousands of arrests of soldiers, police and judges. The president’s suggestion of bringing back corporal punishment for anyone found guilty of conspiring with the coup plotters threatens to turn Turkey’s purge deadly.

The reaction from investors has been mixed. The lira, having tumbled as news of the coup emerged Friday, rallied 2% against the dollar on Monday.

One fund manager giving the country a wide berth, however, is Alquity Investment Management. The company, which has achieved some top-ranking fund returns while investing on ethical principles, has kept its $120 million of assets out of Turkey. In an interview covering emerging and frontier markets from Asia to the Americas, Alquity’s Founder and Chief Executive Officer Paul Robinson sets out the dangers lurking if Europe fails to rein in Turkey:

Turkey has had problems that we’ve been highlighting for a long period of time. You’ve seen these before the problems of the weekend, with the biggest drop in tourism numbers in 17 years. Tourism is down 23% for the first five months of this year, and this is a country that’s very reliant on foreign flows. It’s got a very persistent current account deficit.

It’s a great shame, because Turkey has fantastic entrepreneurs, it has some amazing companies. But the macro is very challenging. With Erdogan, having now been in power since 2003, you’re seeing similar characteristics as in Russia with Putin, where one person is concentrating power in their hands.

You would hope that with events of the last weekend, a well-attuned political leader would look to try and reach out and understand why this is happening, and perhaps find compromises with the segments of society that are unhappy. Erdogan’s not going to do that. Instead, he said this is a God-sent opportunity for him to really tighten his grip and potentially move Turkey from a secular state towards a more Islamic state. And that’s a real, real problem for Europe.

Turkey is the buffer between all of the problems in Syria on its border – look at all the negotiations they’ve been trying to stop some of the migrants coming through Turkey. There’s a huge amount of pressure there, and it’s going to really test Europe and the US’s values in these discussions, because there’s an awful lot of things they don’t like about Erdoğan, but they’ve also got a lot of practical problems they need to solve. Where will principles versus practicalities fall?

The macro situation in Brazil since we launched the Alquity equity fund has been truly awful. All of the problems of Petrobras and the corruption scandals have created huge economic challenges. So, through 2014 we only had about 11% of the fund in Brazil, versus our peer group competitors, which would be 55% to 65% largely because they’re tracking a benchmark.

As things have started to change, we’ve moved up a bit. So, through 2015 we went up to 18% in Brazil because there were a couple of really good companies that were exporters, primarily, that were benefiting from the bombed out currency. And then, as things started to change, with the impeachment of President Dilma Rousseff, we started to see some opportunities come through, and this is where it’s absolutely vital to understand how your companies will behave through changing cycles in the economy.

Mills is a business that had a valuation of about $3 billion. It dropped about 92%. It was down to $100 million in terms of valuation. But it has a very strong balance sheet, 24% free cash flow. It did the difficult things. It laid off about two thirds of its workers, got rid of non-core activities. But it was never going to go bust. As things start to change, it’s got very few competitors left. These infrastructure projects have to come back. We’ve started to go back into this business and it’s up about 100%. It won’t go back to $3 billion quickly, but it could be half a billion to a billion dollars easily.

There’s enough ways that you can lose money investing that you haven’t thought about without losing money from ones that you can absolutely see. The market dropped a few months back by about 20% on rumors that the King was ill. You’re coming up to that point when we know he will die. You will see a big pullback in the market. Why take that risk?

The other thing is that Thailand has a very ageing population, and we just think Vietnam is a much better bet. It’s sort of the new Thailand, if you like. A lot of the companies that were manufacturing in Thailand, or coming away from China, are going to Vietnam now. There are much more interesting opportunities in that young, vibrant population. We’re very much about the next story, not the last story, and we think Thailand is a little bit of the past.

We’re very much bottom-up stock pickers but we have to look at the macro, and Malaysia is the one country in Asia that loses out from a lower oil price. Asia primarily is a big beneficiary from a lower oil price. So, we looked at Malaysia and thought, well, are there any good companies there that will benefit on the export side, because we felt the currency would fall. We’ve been out of Malaysia since 2014 as we couldn’t really find any great exporters that would work for us. We thought the ringgit would fall, though not as much as it has – but we just found there was nothing worth investing in there.

I went to Myanmar the first time as a tourist about eight or nine years ago, and I remember sitting, talking to some of the locals who felt they were having almost a tourism boom at the time. They’d had 150,000 visitors that year. Angkor Wat in Cambodia nearby had more than 3 million visitors that year. So, what they thought was a boom, really they had no idea.

Our investment team has just spent three days down in Myanmar with Yoma, not just meeting with the company’s founder and the key executors, but meeting with second-tier management and each of their businesses.

The changes are absolutely incredible, how busy it’s becoming. It’s incredibly vibrant. You’ve got 65 million people. It’s the second to last shoe to drop in Asia, with North Korea being the last one.

Yoma has the KFC franchise. It’s the highest-grossing KFC franchise in the world. They’ve got hotels. They’re building high-end housing for a rising middle class. They’ve got a tractor business. So, it’s a good conglomerate. In these sort of markets, you need really good ESG – environmental, social, governance –work to understand the management, and they’re behaving the right way in the country, because obviously political risk and corruption are big issues to look at. We spent a lot of time getting to know them very, very well. It’s the largest position in our Asia fund and we’re very excited about it.