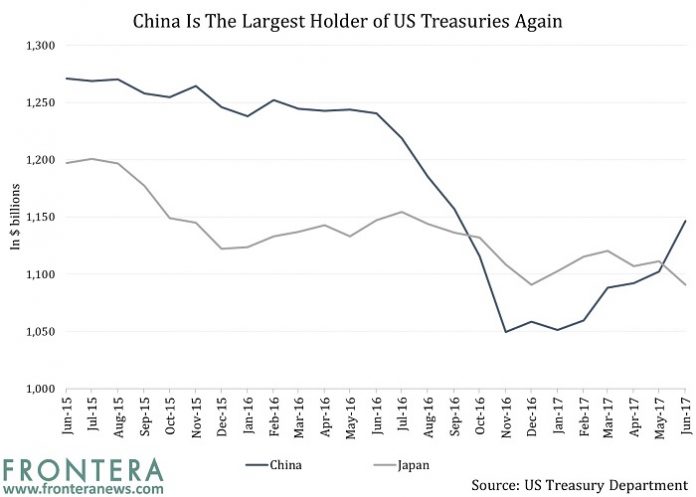 This is post 2 of 3 in the series “Which Emerging Markets Own the Largest Amount of US Debt?”

The August edition of the Treasury International Capital (TIC) report released by the US Treasury Department, which contained data until June, was notable for one aspect in particular: China overtook Japan as the largest foreign investor in US Treasuries after a gap of eight months.

The Asian major had consistently been the largest foreign investor in US Treasuries before it lost the position to Japan in October 2016, as shown by the graph below. In the two year period plotted in the graph, China’s holdings had reached its nadir in November last year. 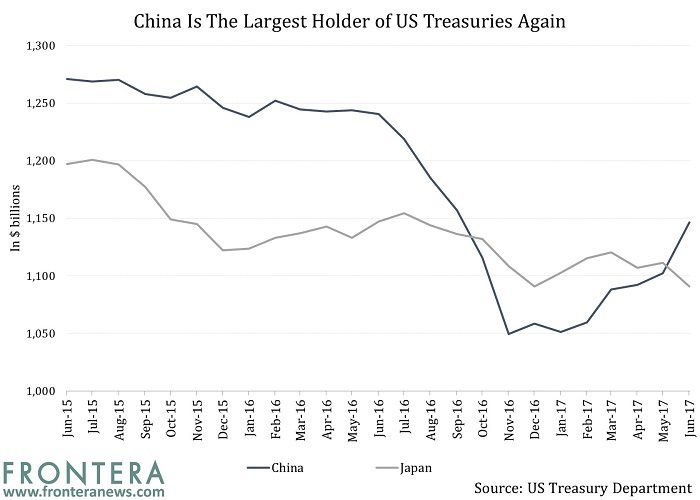 From June 2015 until November 2016, there were only three months in which the country added to its stock of US Treasuries. The decline over this period was equivalent to an annualized 12% pace. The sharpest decline was also seen in November, when the country sold securities worth $66 billion compared to the previous month.

From that point, except for January this year, China has been consistently adding to its stockpile, with the largest monthly addition of $44 billion seen in June.

However, this was not the only interesting trend in the report.

The graph below plots the holders of US Treasuries by country except China which had emerged most consistently in the top five over the last five years until the holdings data for June 2017. South Korea was excluded from this graph as Mexico had figured in the top five for three out of the five years considered in this analysis. 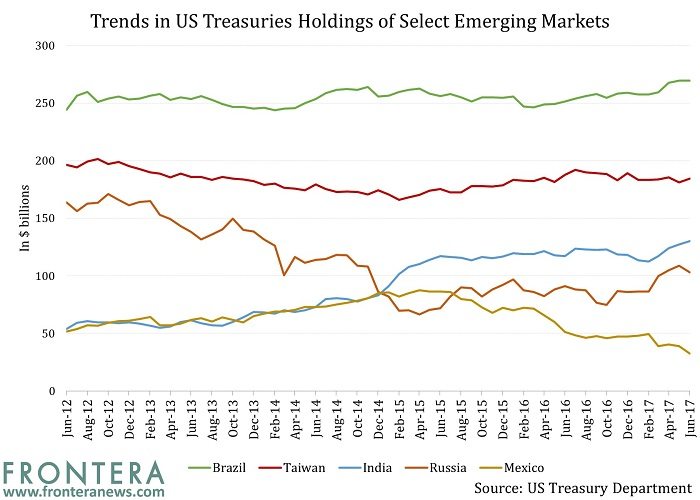 We’ve calculated the annualized rates of change in holdings over the past five years for these countries.

Brazil and Taiwan have seen nearly the same pace of change, but in opposite directions. While Brazil has seen its stockpile increase by a 1% annualized pace, Taiwan has seen a decrease at the same rate.

Mexico presents an interesting case. In terms of pace, it has seen the sharpest decline in its holdings at 9.7% annually. Its holdings of US Treasuries had peaked at $87.4 billion in April 2015 and now stand depleted to $32.3 billion – its lowest in these five years.

Russia has also offloaded US Treasuries quite sharply at an annual pace of 8% over the period. However, the difference between Mexico and Russia is that while Mexico had seen a peak in April 2015, Russia’s holdings had seen their nadir in the same month. Further, while Mexico continues to sell, Russia has been buying.

India has been piling in on US Treasuries of late. Its annual pace over the past five years stands at a staggering 17%. South Korea, has been adding to its US Treasuries holdings as well, at a similar pace of 16.8%.

In the next article, let’s look at what these holdings mean for emerging markets and what they may indicate for the future.

This is post 2 of 3 in the series “Which Emerging Markets Own the Largest Amount of US Debt?”