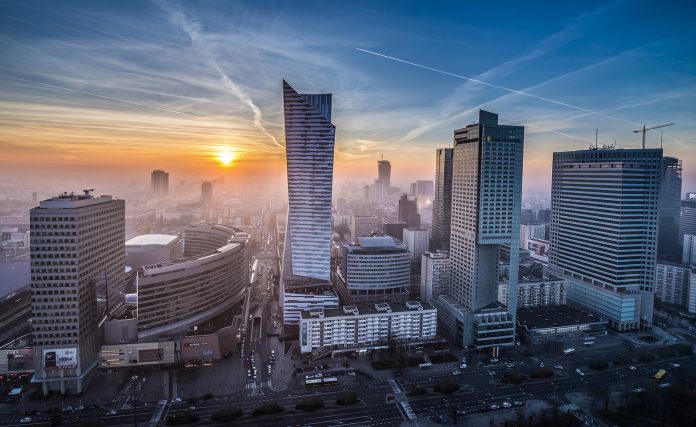 The global aging population is currently on pace to increase real estate transactions volumes by 30% to US$1 trillion from 2015-2020. The major drivers of this trend are international investors, with cross border activity expected to account for 50% or $500 billion of total investment activity by 2020. Meanwhile, a ballooning middle class is spurring urbanization in many upcoming cities globally creating strong domestic demand along side the capital flowing in from across borders.

Frontera has identified five upcoming commercial markets benefitting from this surge in real estate investment activity with particularly strong growth potential in the near future.

Warsaw: Since 1991, the Polish economy has continued to expand – defying the many of down cycles experience globally and regionally. Warsaw’s absolute uptake of Grade-A office space in 2016 was nearly 287,000 square meters against a supply of 210,000 square meters. Higher demand has resulted in a 4.4% y-o-y increase in office rental rates in 2016. This puts Warsaw ahead of many other cities in the region namely, Moscow (-8.9%), Bucharest (0%) and St. Petersburg (3.7%).

In the foreseeable future, Warsaw will continue to consolidate its position as a major IT and service sector hub in Europe. Cheaper cost of operations and rising standards of living will continue to attract more IT/ ITeS, BFSI and other professional service ventures.

Beyond office space, the prospect of retail sector also looks promising. During the previous 10 years, there has been an exponential increase in wages in the city.  An expanding job market coupled with rising income has resulted in increased demand. The yearly increase of 10 points in Poland’s Nielson Consumer Confidence Index in 2016, further highlights bullish sentiment amongst the polish population.

Prague: With a global Ease of Doing Business ranking of 27, Czech Republic offers one of the most attractive environments to operate a business in Central and Eastern Europe. The IT/ ITeS industry of Czech Republic is expected to grow annually by 18% from 2014-2019. Other sectors such as pharmaceutical, healthcare, manufacturing, legal and high tech are also enjoying a period of sustained acceleration.

With more MNCs heading for the city in the recent years, the demand for good quality grade-A space has risen sharply, resulting in a dip in vacancy rates. In 2016, the vacancy rate registered at 11.9%, a y-o-y drop of 2.7%  However as the city already has an ample supply in the CBD, investment in non-CBD and suburbs is expected to offer stronger results.

Nairobi: The Kenyan capital is becoming a focal point for MNCs, regional companies and start-ups that are looking to tap into the prolific East African markets. As per data revealed by Frontera research, Nairobi’s rental index has appreciated by 89% during 2007-2016. Driven by rising demand from manufacturing, banking, education, mining and government enterprises, the market’s ascent has plenty of momentum to continue.

Nairobi will also benefit immensely from higher investments in infrastructure. It is building a vast IT corridor named Konza Techno City that will act as a hub for global IT and high tech giants. By 2020, the project is expected to generate 100,000 new jobs.

A booming economy is expected to translate to rising income and evolving consumer preferences, thereby leading to heightened demand for quality retail. Similar to other African cities, Nairobi is still in nascent stages for organized retail.

Hanoi and HCM: With bombastic economic growth that averaged 6.2% during 2000-2016; Vietnam is no longer one of the best kept secrets in Asia. In tandem with Vietnam’s economic growth, fortunes of Hanoi and HCM City have also soared. In December 2016, office sector in Hanoi and HCM posted rental yields of 8.7 and 8.5% respectively, the highest across the world.

In Q12017, occupancy in Vietnamese cities was fuelled by rising demand from IT/ ITeS, energy, logistics and financial services. In HCM City, occupancy in grade-A CBD projects registered at 95.6%, a rise over the previous quarter of 25 basis points. In Hanoi, occupancy has been around 88%, a rise of 2.4% over the previous quarter. These cities will continue to witness more demand in the near future. With limited grade-A supply in the pipeline, investors are looking for develop more inventory.

Bangkok: With a rank of 46 in the Ease of Doing Business rankings, Thailand’s capital has emerged as a lucrative market in the recent times. According to Frontera research, average rental values appreciated by over 47% in Bangkok from 2007-2016. Due to high demand for grade-A offices, Bangkok has consistently maintained low vacancy rates to the tune of 4.7% to 7.2% from 2011-2016. This puts it ahead of most of its peers in the region such as Mumbai (14.5%), Shenzhen (11.2%), New Delhi (19%) and Kuala Lumpur (17%). At present, annual rental yields in Bangkok range between 6-12%.