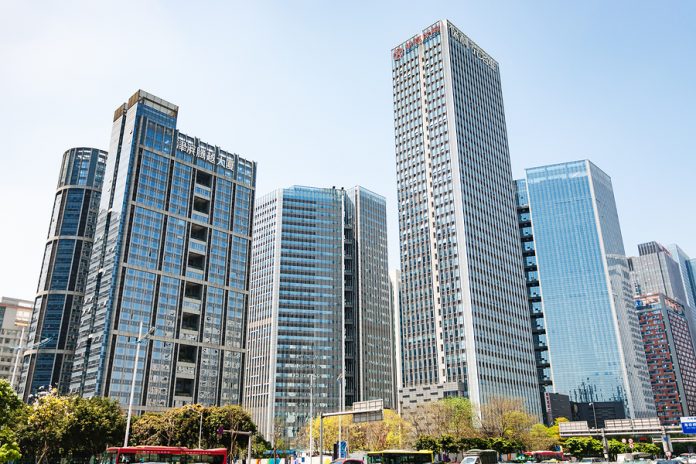 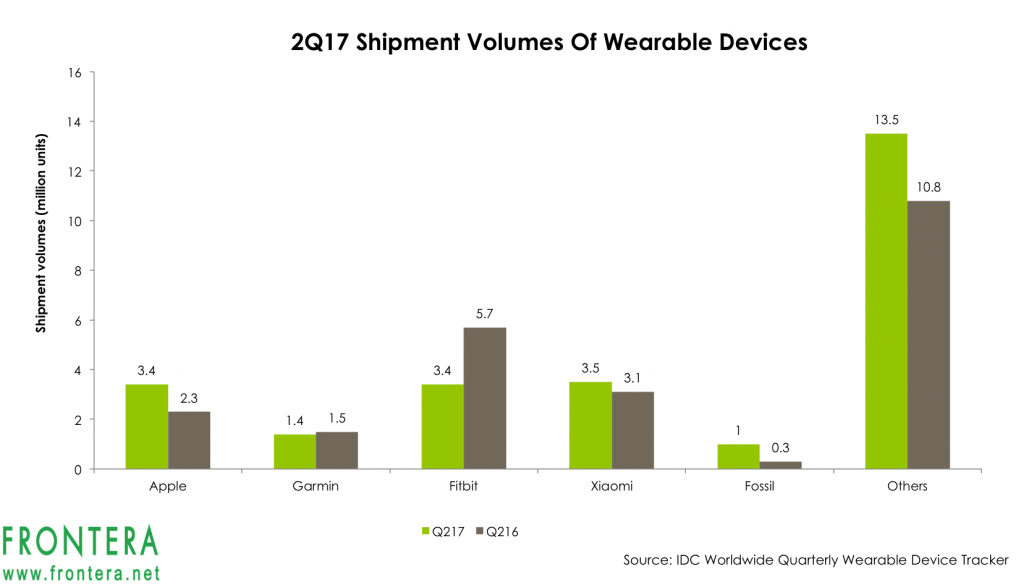 “The transition towards more intelligent and feature-filled wearables is in full swing,” said Jitesh Ubrani senior research analyst for IDC Mobile Device Trackers. “For years, rudimentary fitness trackers have acted as a gateway to smartwatches and now we’re at a point where brands and consumers are graduating to a more sophisticated device.” 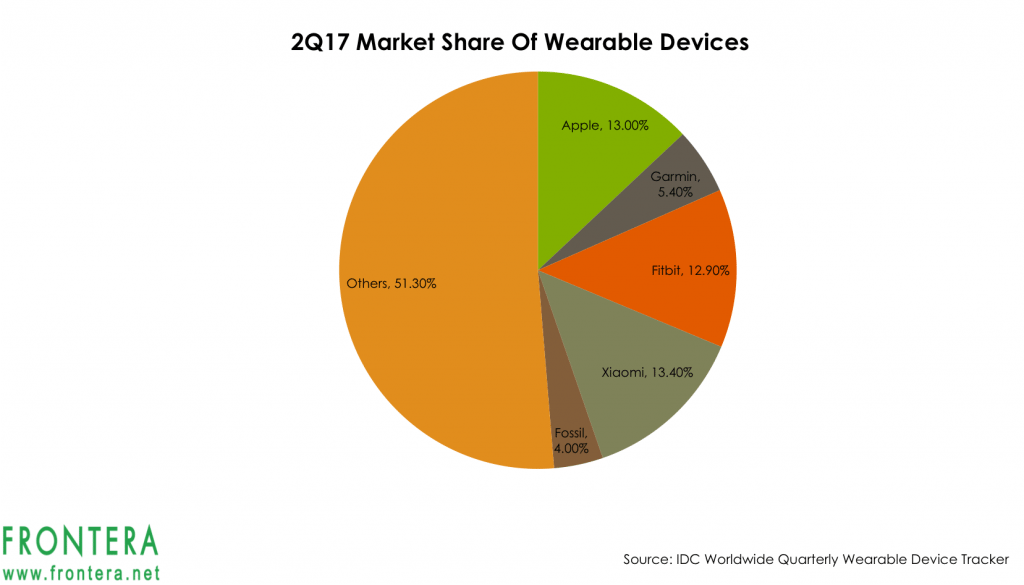 Chinese brand Xiaomi commanded 17.1% market share during the second quarter, toppling Apple and Fitbit as the large wearable devices provider. Xiaomi shipped 3.5 million units in 2Q17, 13% higher compared to the previous year. Neil Mawston, executive director at Strategy Analytics, mentioned, “Xiaomi’s Mi Band fitness trackers are wildly popular in China, due to their highly competitive pricing and rich features such as heart-rate monitors, step-counters, and calendar alerts.” Xiaomi’s lead in the wearable devices segment is primarily to its expertise in providing low-cost devices with competitive features. The company is also catering to an emerging demand for children’s devices.

In comparison, Fitbit’s market share declined to 13% as shipments dropped nearly 40% to 3.4 million units. “Fitbit is at risk of being trapped in a pincer movement between the low-end fitness bands sold by Xiaomi and the fitness-led, high-end smartwatches sold by Apple,” Mawston mentioned.

Apple’s market share, however, increased from 9% to 13% in Q217 as shipments increased 47% to 3.4 million units. In the past one year, Xiaomi has managed to seize a large market share from Apple and Fitbit. Apple has seemingly lost out to Xiaomi due to lack of products in the fitness band subcategory.

The global wearable devices market has grown at a fast pace in a short span of time and analysts expect further momentum in this space over the coming years.

Tremendous growth potential remains for the companies in fast-growing emerging markets. Stocks of wearable device makers have become increasingly popular among high-growth investors. Some analysts expect the industry to cross the $70 billion mark over the next five years. With investments in wearable technology being one of the hottest consumer hardware trends, investors now have these cutting-edge companies on their radar.

Investors wanting to play the boom in wearable devices stocks could consider the Wear ETF (WEAR). The Wear ETF was launched in 2016 to provide exposure to this lucrative market segment.

The Wear ETF tracks the EQM Wearables Index – WEARXT, that invests in manufacturers of wearable technology devices or components of such devices. The fund has an expense ratio of 0.85%, and is listed on the BATS Exchange.

The WEARXT Index tracks the performance of a basket of 54 stocks worldwide, out of which 34 are based in the U.S. Companies such as Apple, GoPro (GPRO), FitiBit, Garmin (GRMN) and Insulet (PODD) are heavily weighted in this index. Additionally, international stocks like Seiko (SE7.F), Adidas (ADS.F) also form part of the WEARXT Index. In 2017 to date, the Wear ETF has returned 16.1%, while the WEARXT Index is up 19% 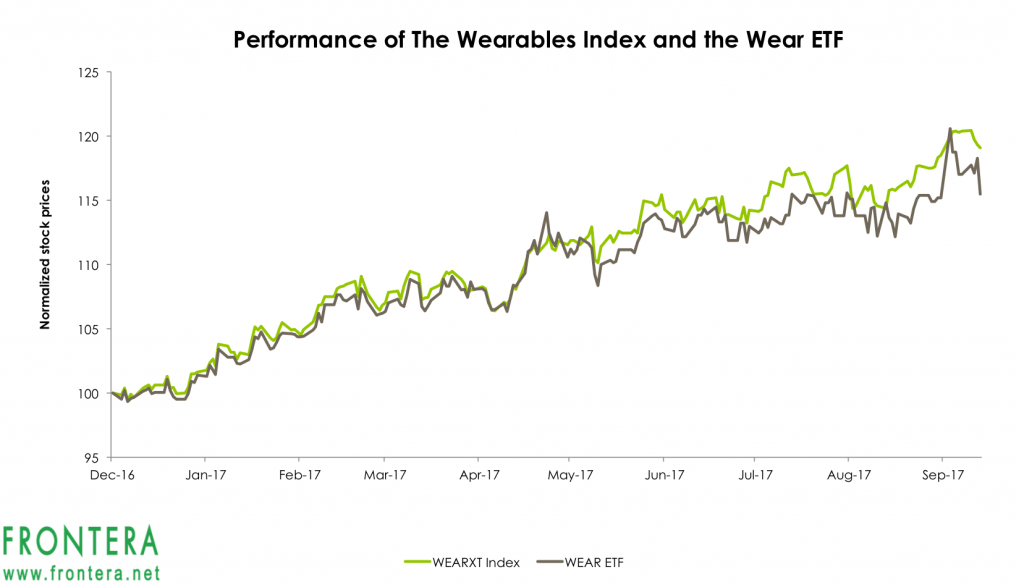 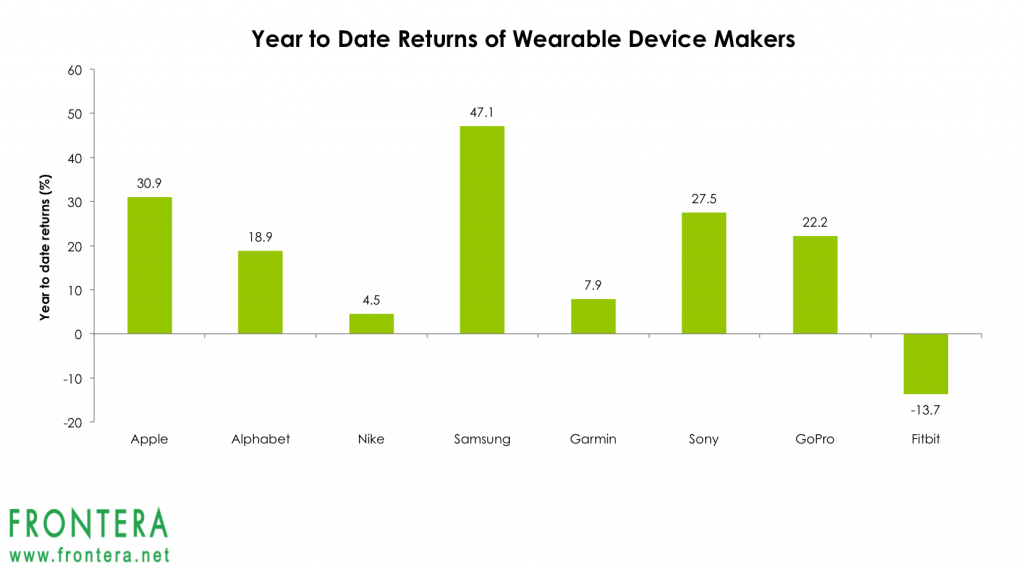 In terms of market cap, Apple and Google (GOOGL) remain the largest wearable devices stocks, but their primary source of revenues are not in this segment. Investors seeking concentrated exposure to the wearable devices segment should instead consider investing in FitBit, GoPro, Garmin or Insulet. Xiaomi is a market leader in this segment, but the company’s shares are not currently listed. 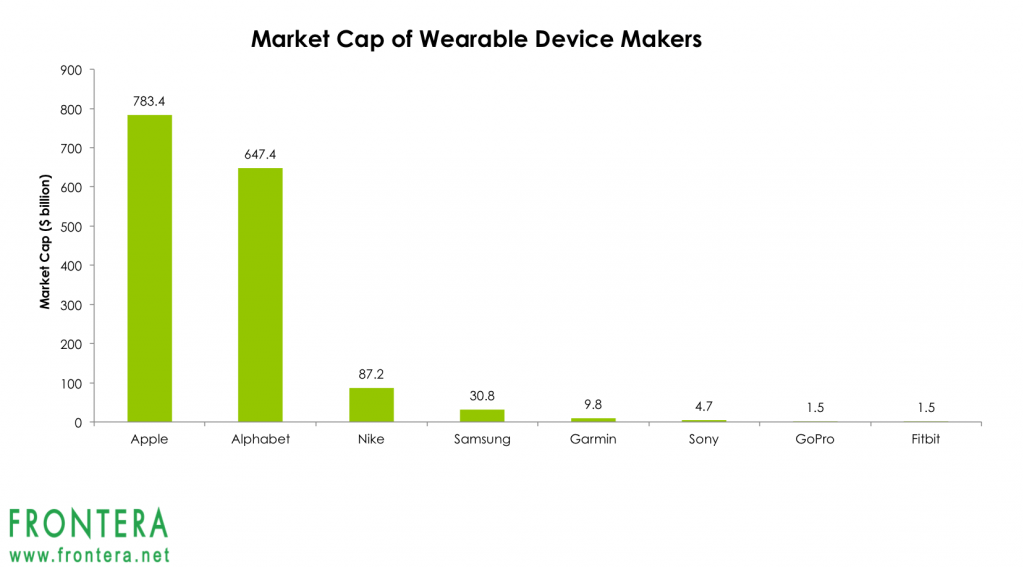 Stocks in the wearable devices sector trade at an average price to earnings ratio of 23x. Apple, Samsung and Garmin are currently trading at inexpensive valuations compared to their peers with PEs of 17.2x, 12.5x and 19.9x respectively. GoPro and FitBit reported negative earnings in 2016 so their PE ratios do not provide strong insights for purposes of comparison.