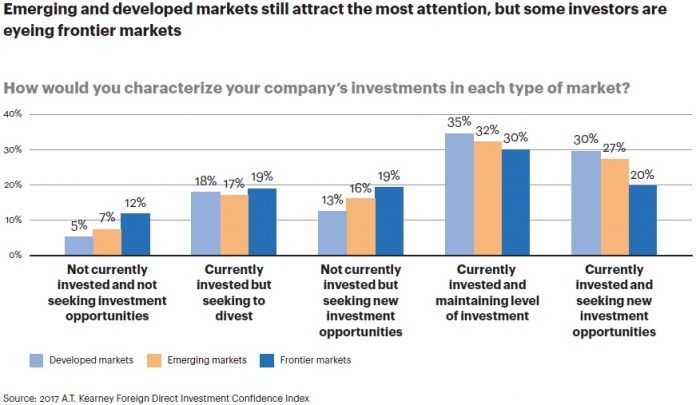 This is post 3 of 4 in the series “May the Flows Be With You: Emerging and Frontier Markets See Heightened Interest”

The annual AT Kearney FDI Confidence Index report for 2017 showed that 75% of the survey respondents intended to increase FDI over the next three years. This was up from 71% who planned to do the same last year. The respondents belonged to industrial firms, service-sector firms, and information technology (IT) companies.

Among the aforementioned investors, 79% of those based in Asia and 83% of those belonging to the IT sector were keen to boost their FDI – the highest among geographic and sectoral respondents respectively.

The main reason for their desire to increase investments was the availability of quality targets (34%), followed by the macroeconomic environment (29%). Greater availability of funds and increased risk tolerance (27% each) were other main reasons. 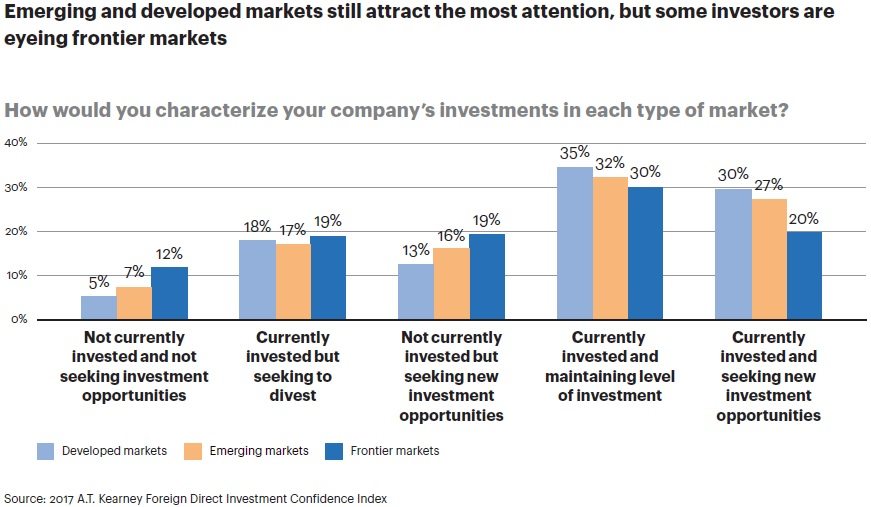 Frontier markets to see an uptick?

However, a key takeaway of the report was investor interest in frontier markets.

This interest in frontier markets is testimony to viable investment targets in markets which are considered to be on the fringe of investment worthiness. Further, this interest also draws from the view laid out earlier in the article that the macroeconomic environment has improved to a degree that even these fringe countries are becoming attractive.

The divergence is not unexpected, though, as these markets are not for all kinds of investors. The political and economic risk along with the relative difficulty in doing business requires expertise to successfully acquire companies in these nations.

Even though the UN Conference on Trade and Development (UNCTAD) expected strong FDI growth in frontier markets this year, it held that uncertainties are aplenty in these markets.

In the next article, let’s look at the regions most attractive for FDI investments.

This is post 3 of 4 in the series “May the Flows Be With You: Emerging and Frontier Markets See Heightened Interest”