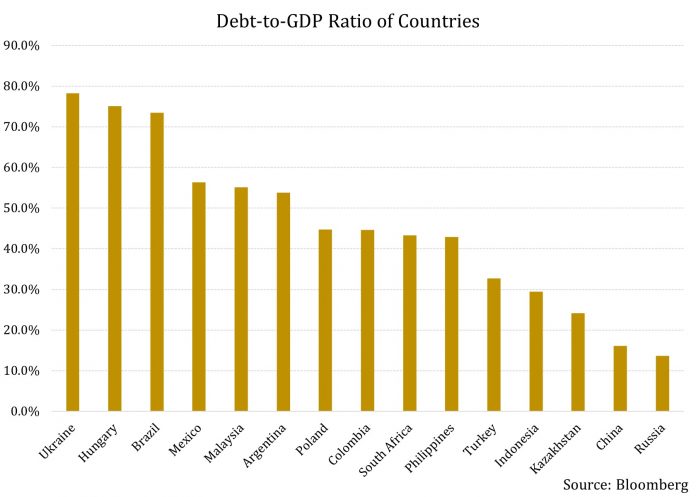 This is post 2 of 5 in the series “Emerging Market Bond ETFs: Worriers over Credit Quality Outweighing Strong Performance?”

Due to its sheer size, we’ll take a closer look at the EMB including its holdings and the state of the markets it is most heavily invested in. 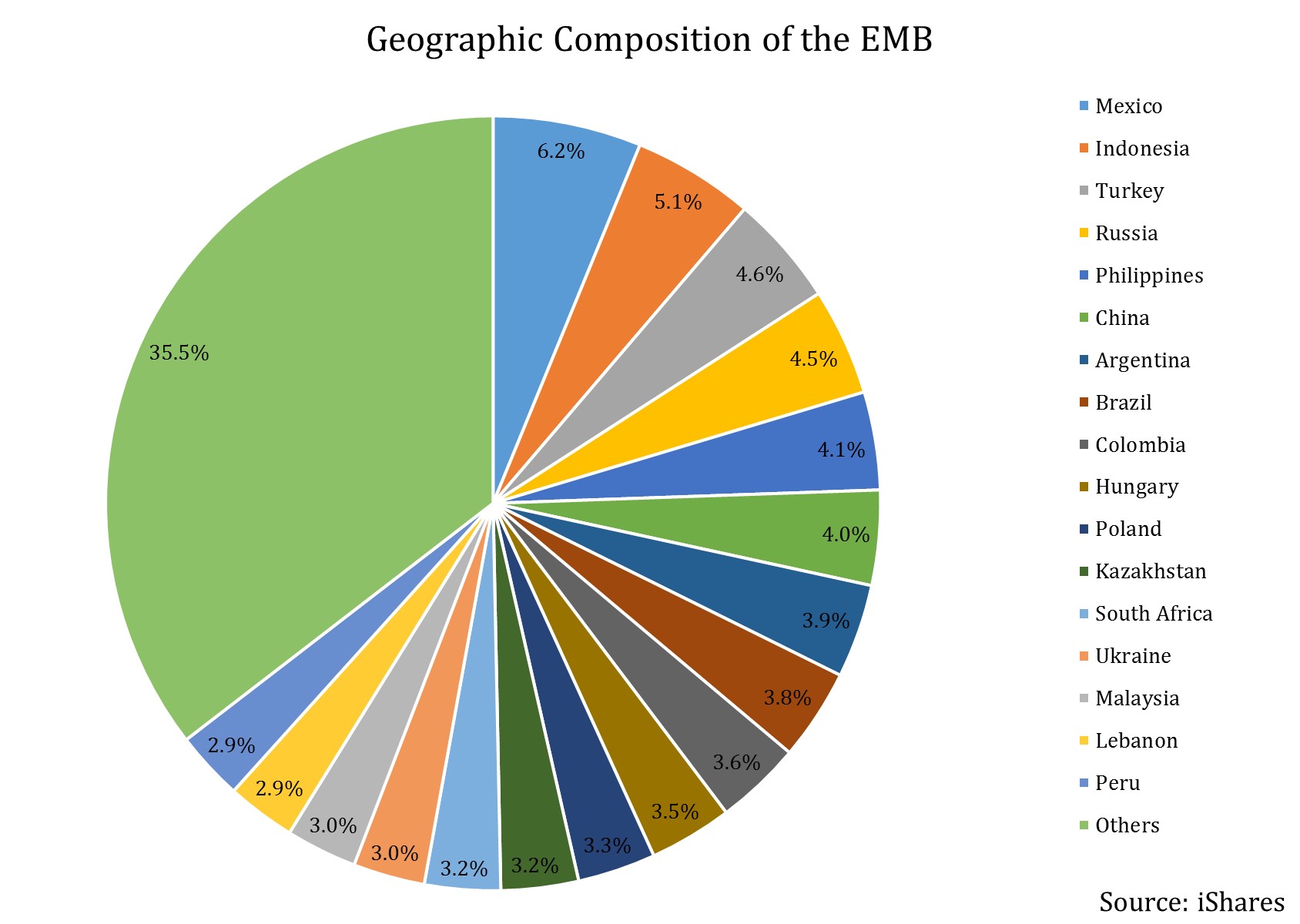 The graph above shows the geographic composition of the fund. It is important to note that sovereign bonds dominate the fund, forming 81% of the portfolio. Further, the fund invests in dollar-denominated emerging markets bond issuances. Hence, the financial state of the nations the fund is invested in, and the movement of the dollar are crucial for the fund.

Most indebted nations among EMB holdings

The graph below displays those nations whose bonds form 3% or higher of the fund’s total portfolio. Among these 15 nations, Ukraine, Hungary, and Brazil, in that order, are the most indebted nations. These countries, whose average debt equates to three-fourths of their gross domestic product (GDP), form a combined one-tenth of the fund’s portfolio. 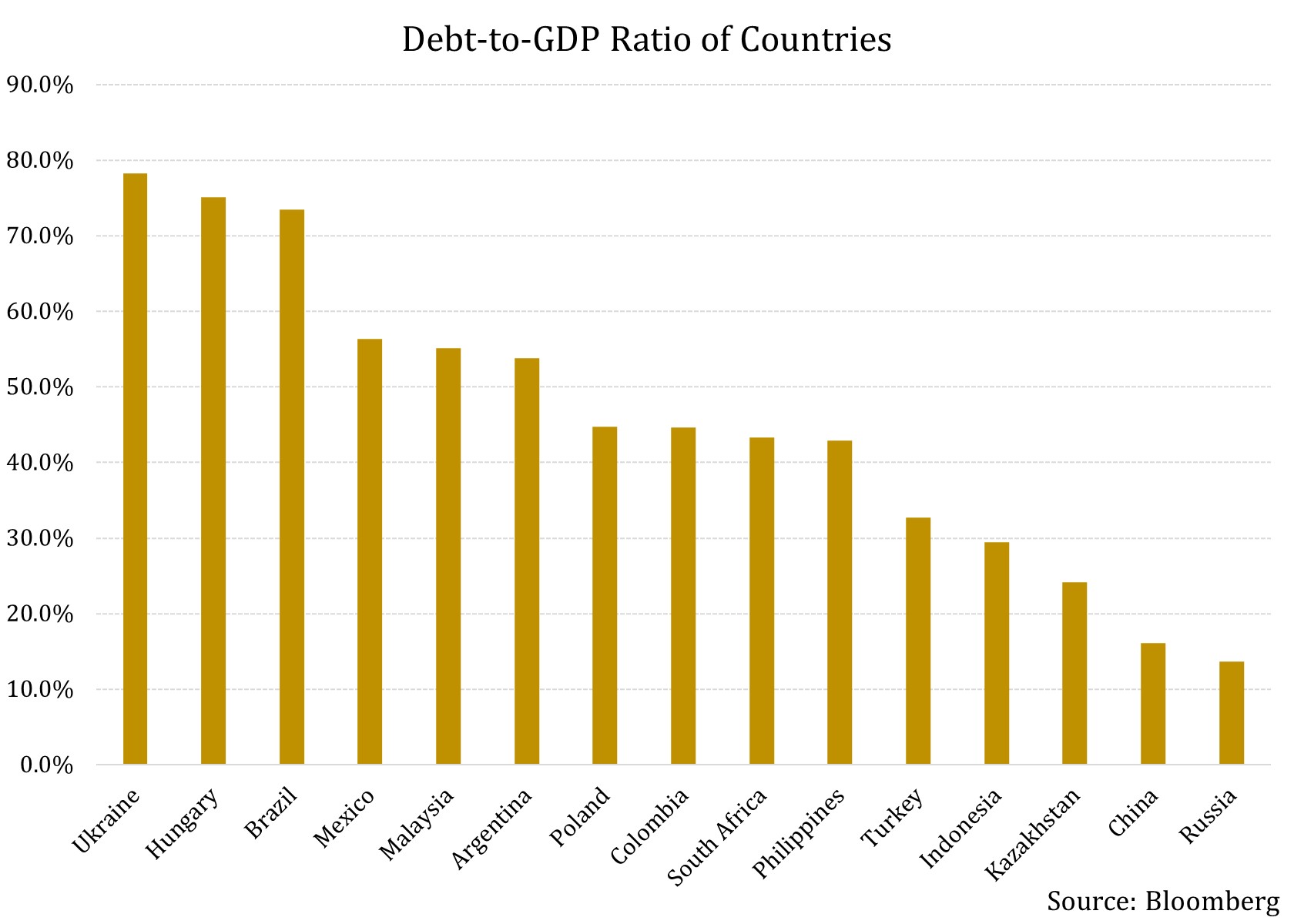 Of these three, Brazil maintains the highest weight at 3.8% and is arguably the most at risk given its fragile economic state and volatile political climate. Ukraine follows, given its tensions with Russia.

A commonality Ukraine and Hungary is that all holdings in the fund at present are government bonds. On the other hand, a number of holdings from Brazil are issued by Banco Nacional de Desenvolvimento Economico e Social (BNDES). The institution was one of 19 companies whose rating outlook was downgraded by Moody’s on May 31.

Among the top five portfolio countries, Turkey and Russia could be considered the riskiest considering ongoing geopolitical developments which have taken a toll on these two markets.

For Turkey, it’s the controversial referendum which strengthen President Recep Tayyip Erdoğan’s grip on power in the country. Meanwhile, the latest US sanctions on Russia given the latter’s alleged involvement in the 2016 US Presidential elections, and its role in Syria and Ukraine have hurt investor sentiment towards the country.

As outlined earlier, the other aspect which is crucial to EMB’s performance is dollar movement. In the next article, we’ll look at how it impacts the ETF and how local currency emerging markets ETFs have performed in comparison.

This is post 2 of 5 in the series “Emerging Market Bond ETFs: Worriers over Credit Quality Outweighing Strong Performance?”