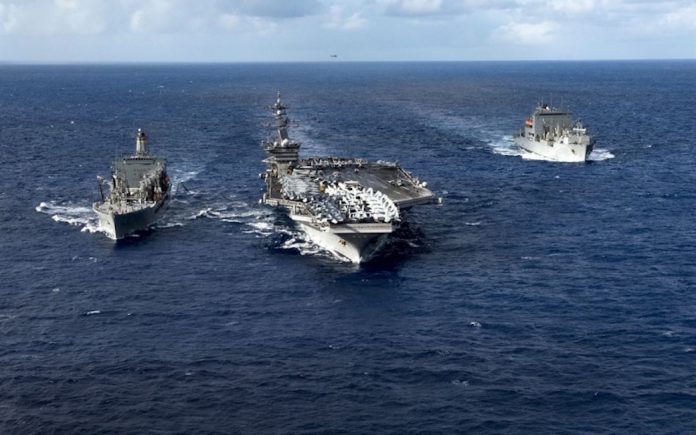 The sea is dotted with reefs and shoals claimed by neighboring states but occupied by China. Beijing uses these reefs to make sweeping territorial claims – claims that are invalid under international law. Washington has long rankled Beijing by exercising its warships’ freedom of navigation and sailing through these Chinese-claimed waters.

The Obama administration tolerated naval harassment and illegal island-building, but the U.S will likely be far less accommodating going forward. Trump appears disinclined to keep trade and security issues separate, so the territorial dispute could send ripples through global markets.

The San Diego-based Carl Vinson carrier strike group steamed into the South China Sea on February 18th to begin a patrol mission, prompting Beijing to issue its usual complaint that “relevant countries” were “threatening and undermining” its sovereignty. This coincides with reports that top brass in the Navy and Pacific Command are nudging President Trump to approve new challenges to China’s claims there. In meetings with Japanese officials this month, Secretary of Defense James Mattis expressed a fundamental rejection of China’s maritime expansion.

Mattis is said to have specifically indicated that Washington will intensify its freedom of navigation operations in the South China Sea. Add to this Trump’s coterie of China hawks – especially Peter Navarro and Steve Bannon, who view war with China as more or less inevitable – and a more hardline approach to the South China Sea looks increasingly likely.

The timing for such a policy shift could not be more inauspicious. The Obama administration refrained from unduly provoking China in its territorial disputes, and the sea has been relatively quiet since, despite the Permanent Court of Arbitration’s rejection of China’s claims in July 2016. President Xi Jinping will want to maintain this stability in the lead up to the 19th Party Congress scheduled for October or November. However, this also means that he cannot afford to look weak in the face of what his people would see as American provocations.

Regardless of whether the Carl Vinson’s current patrol sails within China’s claimed territorial waters, a more assertive American freedom of navigation program will probably take shape. This would compel Xi to react, which could take the form of naval harassment, the declaration of an air defense identification zone, or island-building on Scarborough Shoal. The latter move would be an incendiary litmus test for the new Trump administration. A militarized island outpost there would complete the strategic triangle formed by the Paracel and Spratly islands – if Beijing stationed surface-to-air missiles there as it has in the Paracels, their range would almost reach the Philippine mainland.

Frictions across the board: linking security and trade

If the U.S countered China’s response to its patrols by conducting even more of them, tensions could escalate into a full-blown crisis. Given widespread perceptions of the Trump administration’s volatility and disorganization, serious strife in the South China Sea could rattle markets, which have hitherto remained unaffected. Past Sino-American spats over the sea did not directly impact trade – both sides kept security and economics separate. Investors cannot be entirely sure that this will continue to be the case.

With close Trump advisors already recommending a trade war, the president – who tends to take things personally – could retaliate economically. Past administrations have avoided linking security to trade because it can poison bilateral relations. 2017 could be the year that the South China Sea truly becomes a political risk issue.

The trigger for this would be an announcement by the Joint War Committee of Lloyd’s Market Association, the world’s leading authority on marine insurance. In 2010 the committee declared a piracy high risk area stretching from Somalian waters all the way to India’s western coast, causing shipping insurance costs to increase 300-fold. If the committee declared the South China Sea to be a high risk zone due to Sino-American confrontation, shipping costs would skyrocket.

Revenge of the insurance salesman

If insurance rates rose high enough, the direct route to Northeast Asia offered by the South China Sea would become unaffordable. Instead, the majority of Japan and South Korea’s oil supply would have to pass east of the Philippines, which would also be a huge expense. This would represent an annualised cost of $600 million for Japan and $270 million for South Korea. China consumes more than both countries combined, and, due to geography, its tankers cannot be rerouted and would have to bear the exorbitant insurance cost. 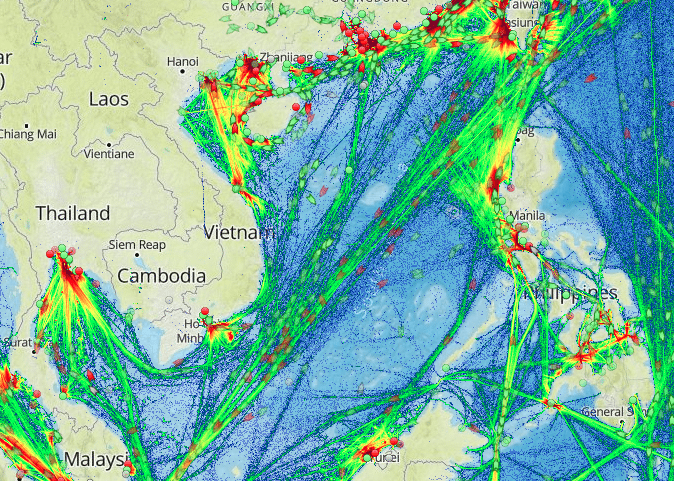 Beijing could instruct its largely state-owned shipping and oil firms to self-insure, which could be cost-effective because – even though the South China Sea might be labelled a high-risk area – neither Beijing nor Washington would dare to escalate to trade interdiction, so no insurance payouts would be necessary. Major shipping firms are already suffering due to oversupply and slowing global trade growth, with some teetering on the brink of bankruptcy. A political risk event in the South China Sea would likely accelerate the current upsurge in new mergers and strategic partnerships in the shipping industry.

Oil markets would also experience jitters. The rejection of China’s territorial claims in The Hague last year gave a 2% price nudge to oil futures, which previously had been unaffected by regional tensions. More serious worries would undoubtedly have a greater impact.

While a war over the South China Sea remains a remote possibility, contamination of bilateral trade relationships are not. The reverberations from this would rattle far more than just the shipping sector. If the Trump administration imposed tariffs, reduced manufacturing exports would injure China’s already slowing economy, and Beijing could target Apple, Boeing, and the American auto and agricultural sectors.

With the military’s reportedly assertive recommendations filtering up to the president, and with Beijing continuing to militarise its built-up islands, the Trump administration’s South China Sea stance may soon coagulate into a coherent policy. An amalgamation of military advice, Beijing-bashing counsellors, and Trumpian unpredictability will decide whether the South China Sea dispute will metastasise. Spillover into the $660 billion Sino-American trade relationship would harm the world economy and poison bilateral relations.

As originally appears at: http://globalriskinsights.com/2017/03/trump-in-the-south-china-sea/