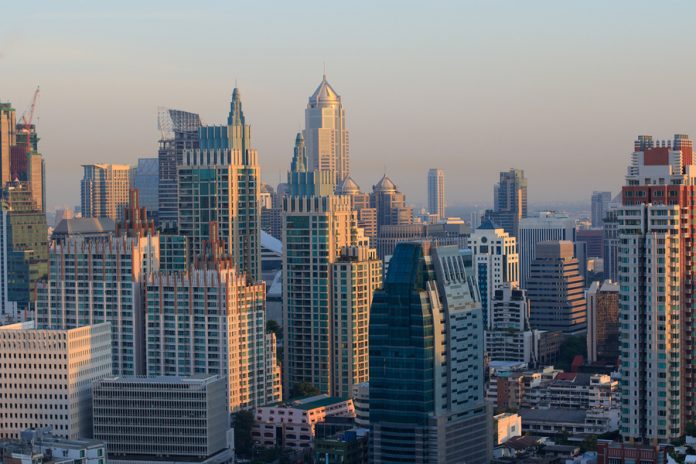 A variety of key indicators point to emerging markets real estate as an increasingly attractive investment strategy. After a period of considerable adversity during the subprime crisis in 2008-09 — which was largely a product of speculative borrowing in the US residential market — it has consolidated its position with strong supporting fundamentals. In various emerging economies,  real estate has upped its ante and is attracting investor interest in leaps and bounds.

Interestingly, the subprime crisis has been somewhat of a blessing in disguise as governments around the world have undertaken steps to regulate their real estate industry, rein in speculative forces, and safeguard investor interest.

In post-crisis Dubai for example, the property registration fees have been doubled to curb speculation. In India, the Real Estate Regulatory Act (RERA) will be implemented in 2017 with strict guidelines for builders and property sellers with failure to adhere to these guidelines resulting in punitive actions.

A rise in demand in conjunction with a gradual increase in transparency levels is making emerging markets real estate a heavily favored asset in a range of countries globally.

Healthy Capital Appreciation Around the World

The prospect of capital appreciation looks bright in emerging markets driven by healthy economic growth numbers, an expanding middle class and wider policy level reforms. A high magnitude of investment in infrastructure and increased emphasis on urbanization is further adding to the momentum.

In China, despite softening economic growth, y-o-y prices of newly launched projects have been appreciating northwards of 12%. Price movement has flattened in India in Q4 2016, however, it is widely believed that real estate will bottom out in 2017 followed by an aggressive price acceleration. A stronger dollar against the rupee is expected to further incentivize international investment.

With economic recovery in other emerging markets including Brazil, Argentina and Russia on the horizon; real estate in these countries is expected to see a healthy rebound. In spite of economic turmoil in Russia in the recent times; property prices continue to spiral upwards in Moscow and St. Petersburg. Surprisingly, more new projects are coming on stream. It is believed that livable and sustainable communities in Russia will continue to offer attractive investment proposition to buyers around the world.

In the Asia Pacific region, Myanmar and Vietnam continues to attract investor interest in large volumes. Positive momentum is also seen in other major cities in Asia Pacific including, Kuala Lumpur, Jakarta, Bangkok and Manila. In Manila; residential prices have appreciated by 13.3% and 12.7% in 2015 and 2016 respectively, according to research by Frontera. In Kuala Lumpur prices continue to soar with appreciation to the tune of 7.6% and 5.2% in 2015 and 2016, respectively. Sentiments are relatively more moderate in Jakarta, with an appreciation of around 3% in 2016.

In Africa, Kenya and Tanzania are driving capital inflows on the back of surging economies and rising urbanization. As seen in the graph below, attractive returns continue to drive Nairobi’s real estate market.

In most of the developed world, due to high property prices, the scope of yield is generally not very high. In some of the major markets such as London and Hong Kong, yield of around 3% is considered as a very lucrative deal. On the contrary, in most of the emerging markets, the average annual rental yields are generally around 6-7% and even more. 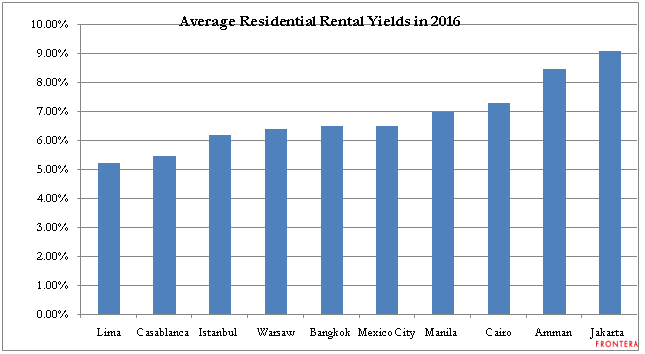 Due to exponential growths in emerging market cities, demand for decent housing will continue to move up the curve — leading to even more rentals.

Amongst various asset classes, real estate is one that capitalizes most on the power of leverage. Therefore, lower interest rate environments prevailing across global markets will add more value to real estate deals. Barring the US, South Africa, and Turkey; in most of the major parts of the world, interest rates have been on the decline. A higher liquidity and cheaper cost of capital will therefore be a natural stimulant for global real estate markets.

With inflationary numbers expected to remain benign in many of the major growth markets, it is expected that a low interest rate environment will sustain which could also give real estate transactions more momentum.

A low interest rate will also ensure easier access to capital for real estate developers, and better interest rates along with new private equity funding opportunities will be a boon for the entire sector.