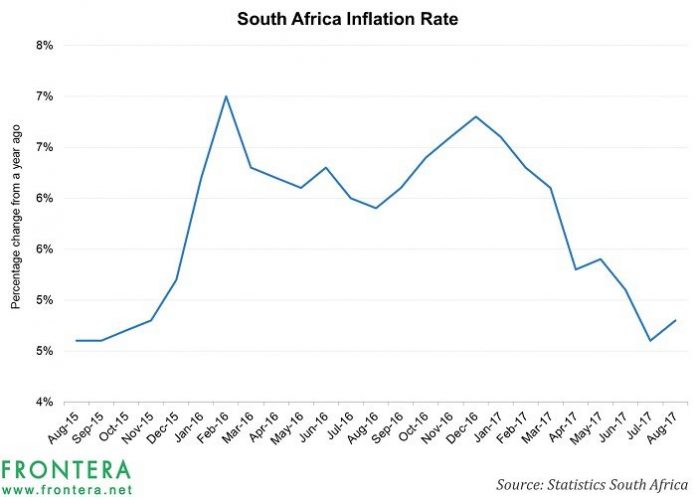 This is post 4 of 4 in the series “Take It ‘Easy’: Monetary Policy in 2017 and Emerging Markets Bonds”

Unlike some other countries in this review, rate cuts in South Africa later this year, and going into 2018 are much more uncertain.

The sole rate cut effected in July this year was aimed at stimulating the economy, and a dip in inflation supported the 25 basis point reduction. 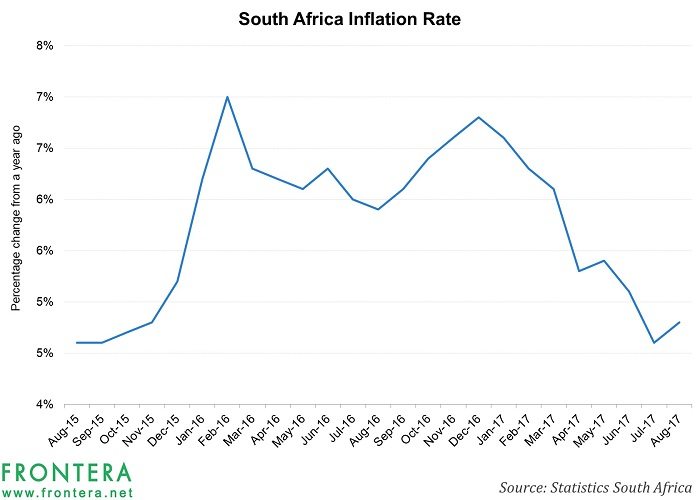 Similar to the situation in Brazil, risks emanating from political developments can be expected to drive financial markets until the 54th National Conference of the ruling African National Congress in December.

The South African Reserve Bank sees upside risks to inflation due to an electricity tariff increase and maintains that monetary policy alone may not be enough to stimulate growth in light of the political uncertainty.

However, in its September monetary policy statement, the picture painted by the central bank forces one to believe that the authorities may cut rates. Particularly if its views on inflation remain in the expected range with some headroom, consumer spending remains constrained after rebounding in Q2 2017, and credit extension to the private sector continues to decline, among other aspects.

Moreover, if rating agencies cut the country’s ratings further, the central bank may need to reduce its policy rate even in the face of political uncertainty.

Investors have continued to pile into South Africa bonds even in the face of political challenges and rating cuts; a small rating cut may not deter them given the still large spread between South African bonds and US Treasuries. Depending on the political situation, it may help infuse some confidence in the country and resuscitate private investment.

Indonesia has surprised markets both times that it has slashed rates this year. Its moves were aimed at stimulating a stagnating economy which has been stuck at about 5% growth for the past four quarters. Bank Indonesia is hoping that the rate cuts will reignite bank lending. 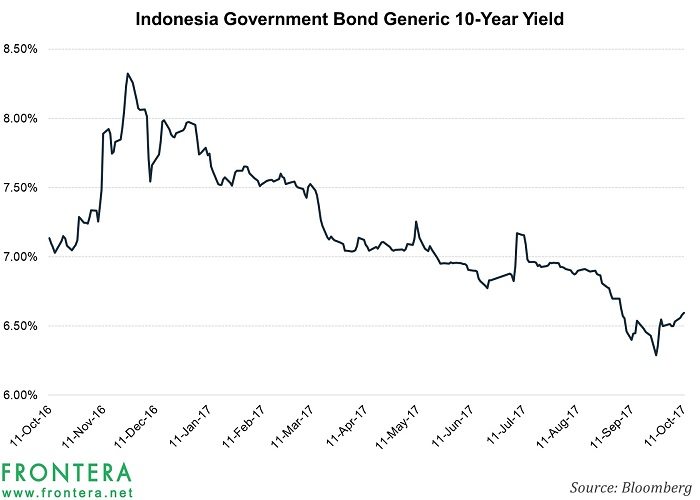 Indonesian bonds have been attractive in 2017 given their yields. However, as shown by the graph above, yields have come down in the past year, making them less attractive to prospective investors than before.

Bonds from countries like South Africa and Brazil are a providing serious competition to Indonesia in this regard. But the country’s relative stability to these nations is keeping its bonds in play.

Apart from monetary policy, investors would want to keep an eye on the Indonesian rupiah for local currency-denominated bonds. A breakout from the narrow trading range that the rupiah maintained against the dollar could be a trigger point for Indonesian bonds.

This is post 4 of 4 in the series “Take It ‘Easy’: Monetary Policy in 2017 and Emerging Markets Bonds”