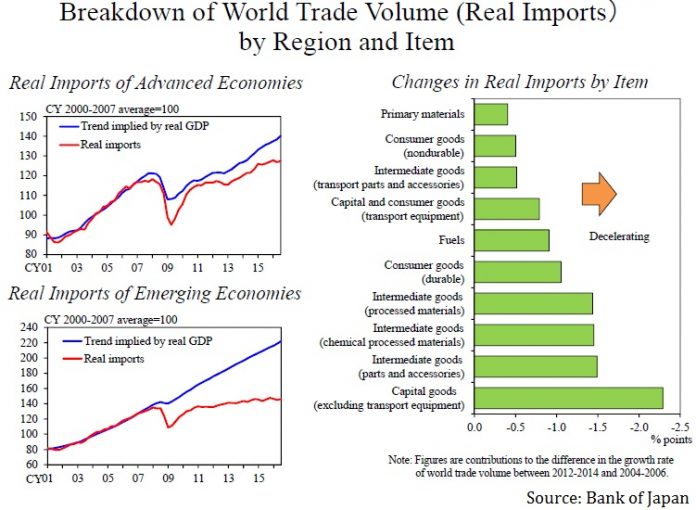 While speaking to the Councillors of Nippon Keidanren (Japan Business Federation) – an influential corporate lobby – in Tokyo on December 26, Bank of Japan chief Haruhiko Kuroda went about explaining the impact of the global financial crisis of 2008.

He outlined that the following were greatly impacted as a consequence of the crisis:

All of the above saw a secular decline post the crisis.

Kuroda stated that “the recent growth in the world trade volume, calculated by summing up the import volumes of the world’s countries, has been well below the average growth rate before the global financial crisis.”

He informed that according to the staff of the Bank of Japan, the global supply chain stopped expanding, and China started looking for inward growth, leading to a slowing in global trade. Importantly, the decline in trade is quite visible in emerging economies (EEM) in terms of region, and capital goods in terms of items.

This is why Japan was adversely affected

The graph above shows that the deceleration in real imports was sharper in emerging economies than in advanced ones. Further, the fall in capital goods imports was sizable.

Given Japan’s advantage in producing capital goods, the aforesaid deceleration in imports of these goods hit Japanese exports, and in turn, the Japanese economy, hard. This slowdown in capital goods exports also hurt Japanese manufacturers.

Things may be improving

After providing the reasons for Japan being hit hard by the global financial crisis, Haruhiko Kuroda informed that in an encouraging sign, the PMI (purchasing managers’ index) has shown improvement in both advanced (VEA) and emerging economies. Imports by Chinese and ASEAN economies have picked up. This should have a positive impact on the manufacturing sectors of several advanced economies, including Japan.

The global financial crisis elicited an unprecedented response by all countries regardless of their economic growth stage. Let’s take a look at that response in the next article before channeling our focus on Japan.