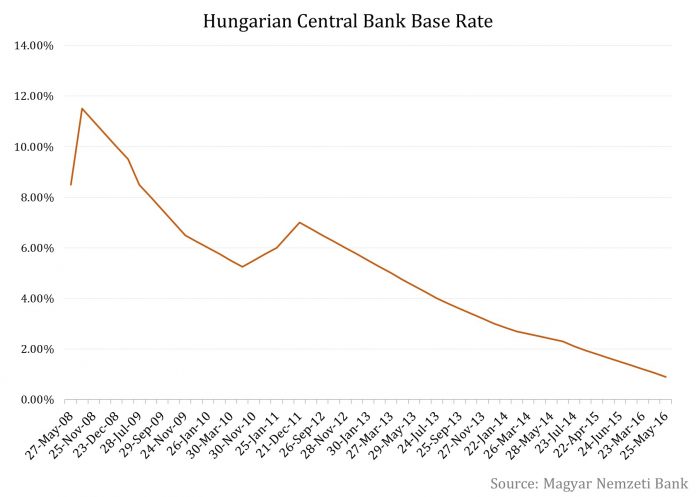 The status quo on interest rates was expected. The bank has cut the key rate thrice in this year and the last reduction was in May. The total quantum of cut effected in the key rate this year has been 45 basis points. Meanwhile, the overnight deposit rate has been in the negative territory since March.

The overnight collateralized loan rate had last seen a reduction in November and the quantum of cut was 15 basis points. The one-week lending rate also saw its latest reduction last month and was cut by 10 basis points.

Reducing interest rates is one of the tools that a central bank has to ease its monetary policy. And in recent times, the Magyar Nemzeti Bank has been focusing on unconventional tools to ease monetary policy.

Continuing with that trend, the Monetary Council of the central bank set an upper limit of 750 billion forints on the quantum of money that banks can deposit in the central bank’s three-month deposit facility. This limit is applicable as at the end of Q1 2017. This cap is at 900 billion-forint for the end of 2016. According to the Bank, this limit will reduce between 100 to 200 billion forints out of the deposit facility. It will help increasing bank-sector liquidity. This limit is revised every quarter.

In its December policy statement, the central bank stated that its Monetary Council will “stand ready to ease monetary conditions further using unconventional, targeted instruments” in order to reach its inflation target.

The central bank had some good news regarding economic growth and inflation. Let’s look at that in the next article.