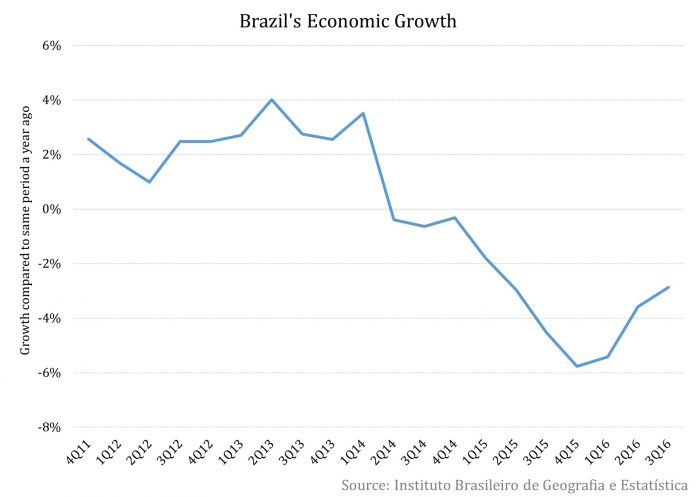 Dilma, Temer, the Olympics, austerity: What a year for Brazil!

2016 can easily be described as ‘eventful’ for Brazil. Had it not been for Brexit and the US Presidential election this year, it could very well have been Brazil’s year, though not in a good way.

The first major development to unfold was the impeachment of Dilma Rousseff – the first female elected to the office of the President of Brazil. On May 12, 2016, she was forced to step down from her position by the Senate which voted 55-22 in favor of impeachment proceedings to begin against her. Inside of two terms as President, she went from being a leader to being a political and economic pariah.

She was accused of tampering with the financial figures of the government by using loans. These loans tampered with the government’s finances and made the country’s budget balance look in a better shape than it actually was. This tampering was deemed illegal by a court and formed the basis of impeachment proceedings against Rousseff. Her economic policies had a lot to do with her impeachment as well.

Not the first to be impeached

Rousseff’s impeachment was not a first for Brazil. In the early 90s, the then President of Brazil Fernando Collor de Mello – till date the youngest President to assume office in Brazil – was impeached after proceedings found him guilty. There were a few things common between both impeachments.

Even during Fernando Collor’s impeachment in 1992, Brazil’s economy was in trouble, similar to the way it was leading up to Rousseff’s impeachment. The country’s economic output had declined 4.3% in 1990, the year in which Collor had assumed office. A downturn in the economy was accompanied by a corruption scandal in both eras.

Another reason why both Collor and Rousseff were impeached was because they betrayed the people by undertaking actions which they had vehemently opposed in their respective election campaigns. Let’s look at that aspect and the post-Rousseff Brazil in the next article.

The post-Rousseff Brazil: The highs and the lows

In the previous article, we talked about similarities between the impeachments of Fernando Collor and Dilma Rousseff. During their respective tenures as President of Brazil, both ended up enacting schemes which they had expressly stood against prior to taking office.

In his election campaign, Collor had argued that if his rival Luiz Inácio Lula da Silva won the election, he would freeze bank accounts. However, after his election, Collor himself went about freezing bank accounts, thus irking the voting populace. Though he did so to loosening the vice-grip of inflation on the economy, people felt betrayed by this action.

In her case, Rousseff had cautioned voters during her campaign speeches about her opponents intending to push through hurtful fiscal adjustments, promising that she’d not take Brazil down that road. However, given the poor state of the economy, she herself put into effect similar fiscal adjustments. Again, though the move was not wrong, it flew in the face of her campaign promises, thus angering the public.

The process of Brazil’s political impasse was completed on August 31, when Rousseff was found guilty of mishandling government spending and impeached with a 61-20 vote. This paved way for Michel Temer – Rousseff’s second-in-command – to take over and complete the remaining term until the end of 2018.

Brazilians had another reason to rejoice: the summer Olympics which were held in August. After all the political wrangling, the games brought some relief and a much needed break. Coupled with hope for Rousseff’s impeachment and a better future, Brazil hosted a successful Olympics after an iffy start.

There were mixed feelings about Michel Temer with some polls showing that he was as unpopular as Rousseff. However, hope had preceded worry then. Recent announcements from his government have been quite unpalatable to the Brazilian people. Let’s look at this closely in the next article.

Why has PEC 55 got Brazil seething?

This innocuous looking code has got Brazil enraged. PEC 55 refers to a constitutional amendment which has placed a spending cap on government spending. The amendment was passed with a 53-16 vote in the second of two votes held on December 13, albeit by a lower margin that the government had expected. In the first vote that was held on November 29, the margin was 61-14.

The PEC 55 places limits on public spending across the legislative, executive, and judicial branches. The amendment, which was signed into the constitution on December 15, will allow public spending to henceforth grow at the rate of inflation recorded in the preceding year. Importantly, this is not for the short or medium term. The amendment will remain in place for 20 years.

Given the framework, the government has said that the budget increase for 2017 will be 7.2%.

As we have seen in the previous two articles of this series, Dilma Rousseff was impeached partly because of the negative impact of her economic policies. Michel Temer became President with one objective in mind: to get the Brazilian economy back on track. Reining-in public expenditure was a crucial goal for the Temer government.

Favorable vote on the PEC 55 can be considered to be a significant victory for the current administration and for Michel Temer’s ability to take tough decisions. However, it has resulted into the already unpopular President becoming even more so.

Regardless, the government says it’s not done with reform measures yet. Let’s look at another significant area of reform in the next article.

With amendment PEC 55 having been signed into the constitution, the government is targeting the pension system. Calling the spending cap decision “unprecedented,” President Michel Temer informed that the reform of Brazil’s generous pension system is next on his government’s agenda. In its present state, the country’s pension system allows people in certain professions to retire as early as in their late 40s, thus putting an immense burden on government finances. Temer admitted that reforming of the pension system would be unpopular as well.

Speaking of being unpopular

A poll conducted by the Folha de S.Paulo newspaper on December 13 had showed that 60% of Brazilians are against the amendment. The survey also showed that younger, well-educated, and those on the lower end of the wage ladder are vehemently opposed to the spending cap while the wealthy are generally supportive.

Another survey by the same newspaper showed that 51% of those surveyed rated the present administration as bad/terrible. This was a significant rise from 31% voting for the category in July. The poll also showed that 63% of the respondents wanted Temer to step down.

This unpopularity has increased in light of accusations that Temer sought donations from a construction company which has been found to be involved in the mega corruption scandal at Petrobras ([stock symbol=”PBR”]).

The leftist opposition has attacked the center-rightist Temer administration for the PEC 55 amendment. According to them, this modification will be hurtful to underfunded avenues like health and education. Social programs would take a hit, thus widening the divide between the haves and have-nots. Given the wealth distribution in Brazil is already among the worst globally, they say that this alteration will make things worse.

The Brazilian people have been up in arms against the decision, with protests having tuned violent across the nation. Even the United Nations is opposed to the move. Let’s look at their views in the next article.

The UN is appalled by the PEC 55

The United Nations is quite upset by the spending cut program implemented in Brazil by the Michel Temer government. Philip Alston, who is the United Nations Special Rapporteur on extreme poverty and human rights, opined that the PEC 55 amendment, or the New Fiscal Regime, is a violation of Brazil’s commitment to the International Covenant on Economic, Social and Cultural Rights, which it had agreed upon in 1992.

Alston, who had released a statement on December 9, before the second vote took place on December 12, has said that “It is completely inappropriate to freeze only social expenditure and to tie the hands of all future governments for another two decades. If this amendment is adopted it will place Brazil in a socially retrogressive category all of its own.” He had noted that “It will hit the poorest and most vulnerable Brazilians the hardest, will increase inequality levels in an already very unequal society, and definitively signals that social rights are a very low priority for Brazil for the next 20 years.”

Terming PEC 55 as a “historic mistake” Alston informed that this would be akin to turning back the clock on the impressive social protection system that the country has put into place in the last few decades.

The Guardian interviewed Pedro Paulo Zahluth Bastos, associate professor in economics at the University of Campinas, on the issue. He said that though Singapore and Georgia has also changed their constitutions to include spending cuts, they did not go as far as PEC 55 does in terms of either scale or duration.

According to Bastos, education spending per child will fall by almost 33% while health spending will decline by almost one-tenth per patient. Meanwhile, interest payments will be excellent. The Guarding reported Bastos saying that “Brazil will remain one of the only countries in the world without a dividend tax or an income tax for company owners.”

The economic impact of this move may be beneficial in the medium to long-term, but the society has begun paying the price right now. Investors in Brazil-focused funds ([stock symbol=”EWZ”]) ([stock symbol=”IEF”]) need to be wary of volatility in the short-term.