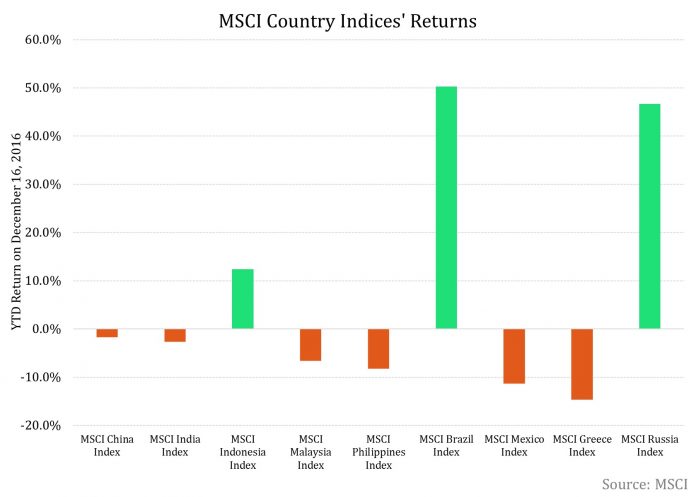 Emerging Markets to watch out for

In this series, we’re looking at views of Ian Hui, a Global Market Strategist at JP Morgan Asset Management, regarding developed and emerging markets. In the previous article, we saw that Hui expected developed market equities (IEFA) to outdo emerging market equities (IEMG) in 2017, even though things would not be all bad for the latter. Hui was interviewed on CNBC-TV18 by Latha Venkatesh, Sonia Shenoy, and Anuj Singhal.

Markets less reliant on US trade to do better

On the question of which emerging market will do better that others in the first half of the next year, Hui said that those emerging countries which are not overly dependent on trade with the US “are probably going to do a bit better.” He went on to say that, “Within that I do think India is probably going to be one of the beneficiaries there.”

If his assertion turns out to be true, it does not speak well for emerging markets like Mexico (EWW) which is quite reliant on US for trade.

Providing examples, he said that India (INDA) looks better placed than most other emerging markets in this regard. On the other hand, Malaysia (EWM) may struggle somewhat. He believes that China is stabilizing now. But given the vast differences between emerging nations, the result will be varied.

Commodity exporters to do well

This brings Russia to mind. It is to be seen how the crude oil production cut starting next year will impact crude oil prices. But Russia has said that its budget assumes crude oil prices to be $40 a barrel. If Brent crude remains in the $50-$60 a barrel range, Russia would be comfortable and it could positively impact Russia-focused ETFs (ERUS).