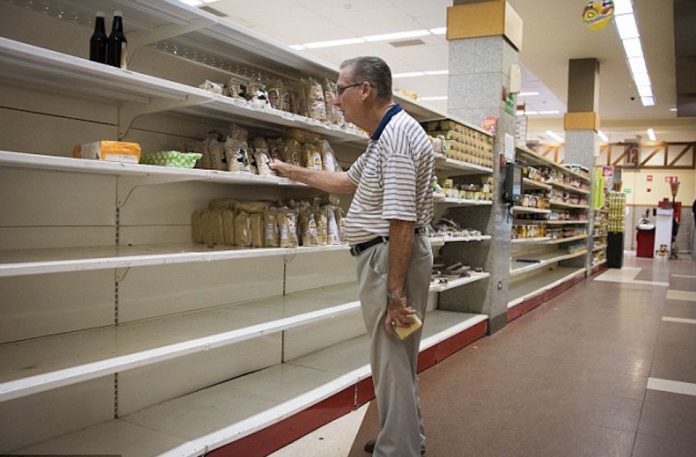 One would not be exaggerating to claim that it just couldn’t get any worse for Venezuela. Inflation has been accelerating with the IMF (International Monetary Fund) expecting it to reach 1,600% in 2017. The highest level of inflation in the world has begun eating into the currency too. Economic contraction refuses to loosen its vice grip.

The situation is so bad that the government has had to raise the minimum wage five times in the past one year with the latest increase announced on January 9, 2017. The increase of 50% set the minimum wage to 40,638 bolivars. This is equivalent to $60 at the official exchange rate.

Recently, the cash-strapped nation indulged in a transaction which can be described as ‘strange’ at best.

At the turn of 2017, reports emerged from Reuters and WSJ (Wall Street Journal) of a finance ministry official stating that the government had raised $5 billion by selling bonds to government-controlled Banco de Venezuela and Banco Central de Venezuela – the country’s central bank.

This means that the government bought and sold the bonds by itself and to itself. Furthermore, the transaction was carried out at an extremely low rate.

Given the dire straits the country is in, investors are not ready to touch the country’s bonds with a bargepole. On the open market, the going rate is over 20% for its bonds, whereas the 2036 bond mentioned above was raised at just 6.5%.

Venezuela has been forced to put a lid on imports of even essential food and healthcare items because it does not have the money to pay for them. The country can’t approach international investors because no one would be willing to lend to it on worries of a financial collapse.

What makes the aforementioned bond transaction even stranger is that at the rate at which it was undertaken, it does not add materially to the government’s wallet.

Both Reuters and WSJ noted that there could a Chinese connection in the bond transaction.

Quoting an anonymous official, WSJ reported that “The bonds mature in 2036 and were sold on Dec. 29 in a private transaction managed by a subsidiary of China’s Haitong Securities Co.”

Meanwhile, Reuters reported that “the operation was underwritten by China’s Haitong Securities, according to two bond traders who had seen preliminary details of the issue.”

This aspect is still unclear and China’s involvement is open to speculation.

President Nicolás Maduro has been blamed for mismanaging the country’s economy. At the same time, the sharp fall in crude oil prices have only worsened the situation for the oil-rich country.

Shady transactions like these will do no favors to Venezuela. But at a time when its facing financial ruin, a squeaky clean image in the minds of international investors may not be the first thing on the country’s mind.