Venezuelan bonds (EMB) would seem like an unattractive investment. The country is in a state of chaos and the government is stripped of cash to such an extent that the country is facing a shortage of food and medicines and is at risk of default on its debt. The odds of a credit event over the next five years is 92%, according to CDS data.

Despite the high risk, bonds issued by the country’s oil company Petróleos de Venezuela or PDVSA are attracting investments from some of the world’s largest investors. These parties are to some extent betting on the government’s record of using the country’s funds to repay bondholders rather than meet the shortage of food and medicine requirements for its citizens. As per data from brokerage firm Exotix, the Venezuelan government and PDVSA currently have nearly $61 billion in debt outstanding. 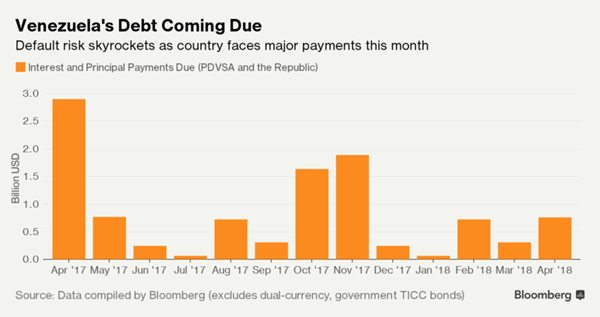 Venezuela debt repayments worth $3.7 billion become due in the fourth quarter and another $8.2 billion in 2018. Among the large holders of PDVSA bonds are BlackRock (BLK), T. Rowe Price, Fidelity, JPMorgan Chase (JPM) and Ashmore, an emerging market (EEM) specialist based in London.

Investors are willing to take on high levels of political and economic risk on high yielding investments when interest rates in developed countries are near zero. Carlos de Sousa, an economist at Oxford Economics, a research company said, “We are in a low-rate environment, and these are dollar bonds with really high yields.”

Further, some experts believe that bonds issued by PDVSA are devoid of the legal mechanisms associated with pure sovereign bonds thus enabling the government to negotiate favorable terms with foreign investors in the case of default. In the past few years, the Venezuelan government has repaid billions of dollars to investors holding PDVSA’s bonds. All of which suggests that, despite the controversy over the Goldman trade, foreign investors will continue lining up to buy PDVSA bonds.